You Can Stick the Podo Bluetooth Camera Anywhere 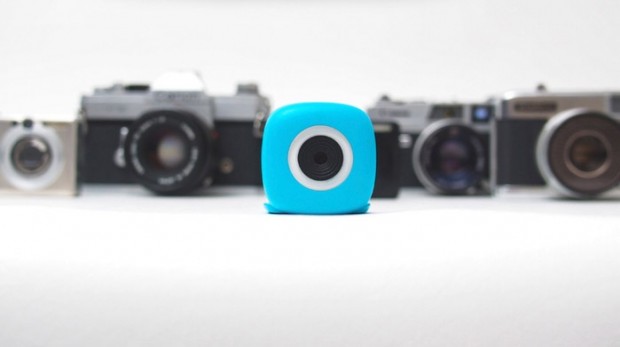 Selfie and photo booth enthusiasts might want to take a look at the Podo Bluetooth camera. This colorful little Bluetooth camera brags it can stick to almost any surface to help you take the perfect shot of yourself. No “selfie stick” needed.

Podo seeks to eliminate some of the common frustrations experienced with smartphone photography. Measuring about two inches and weighing 1.8oz, this 8-megapixel camera is designed to be easily carried in a bag or pocket. While taking along an extra phone accessory might be a bit of a hassle, Podo could add other conveniences to make it worth your while.

For more information on Podo, check out the Kickstarter video below.

Podo’s biggest bragging feature is its restickable back. Instead of adhesive, a micro suction pad is used. A magnet is also in the back for added secure stickability. The pad is washable to remove dust build up, but can still stick over and over again. The Podo Bluetooth camera can adhere to glass, wood, concrete, metal, just about any solid surface, the company claims.

This restickable back is supposed to make Podo a convenient hands-free camera. You don’t have to ask a passing stranger to take a picture, be limited by your arm’s length, or twist in awkward angles to get the shot you want.

The Podo Bluetooth camera works by syncing to your smartphone through a Bluetooth connection. With the use of an app, the company claims you can then control Podo to take single shots, time lapse sequences, video, burst shots, and more. The app also has a live preview so you can see what the camera sees before you start shooting.

Podo is the brainchild of three UC Berkeley graduates. After coming up with their idea for a stick-and-shoot camera, they decided to enroll in a hardware accelerator, Highway1. Highway1’s purpose is to help hardware startups make better, more cost effective prototypes and prepare for production.

After completing Highway1’s program, the trio began working with PCH, a company that assists design manufacturing solutions for businesses. Since Highway1 is a division of PCH, this was probably a natural transition for the team.

To launch their product, the team has started a Kickstarter campaign. Judging by how well their campaign is going, it’s clear there is some definite enthusiasm for this little device. With thousands of backers, Podo has successfully raised more than $350,000, leaving its $50,000 goal far behind.

For those interested in trying out their own Podo you can pre-order one for $89. The estimated retail price in the future will be more in the $99 range. Podo is expected to begin shipping in August.