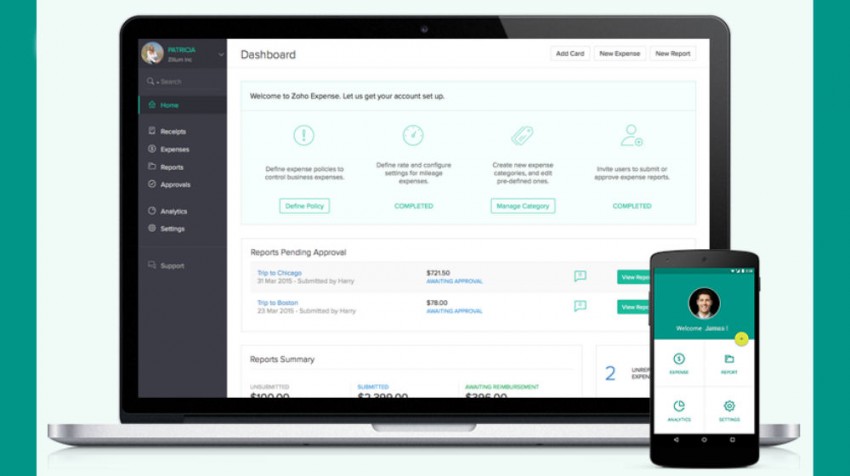 Keeping track of your finances isn’t normally considered to be the most exciting part of running a business. But it is essential.

That’s why there are so many automated tools out there to help businesses keep track of earnings, expenses, and employee compensation. Each one has different features and benefits to fit the needs of different types of businesses.

And this week, we learned of another couple of additional offerings from existing financial management brands. QuickBooks acquired Playbook HR, a move that will allow the company to offer contractor management tools. And Zoho launched a new expense management system, which is the company’s 25th application.

Read about these updates and more in this week’s Small Business Trends news and information roundup.

Expense reporting is painful, says Raju Vegesna, Chief Evangelist for Zoho. Zoho, he said, “wants to take the pain of expense reporting away.” This week Zoho, which offers two dozen different productivity, financial and marketing business applications, announced the launch of Zoho Expense. It is the company’s 25th business software application to date.

Days Are Numbered for the LG Google Nexus 5

If you’ve been in the market for a good smartphone at a decent price, you’ve probably read one of the glowing reviews of the LG Google Nexus 5. The 5-inch Android device has become a darling of the mid-range smartphone community. What it lacks in internals it more than makes up for with its affordable price tag.

Samsung’s new flagship devices will be in the public’s hands by the end of this week. The new Galaxy S6 and the unique Galaxy S6 Edge will be available for purchase on April 10. It’s currently available for pre-order. These are Samsung’s top-of-the-line smartphones and they’re definitely for those who can’t live without their device nearby, figuratively speaking of course.

Has the laptop become passé? Microsoft sure wants you to think that way with the introduction of the Surface 3. Like a lot of hybrid laptop-tablets and the companies behind them, they’re touted as a replacement, once and for all, for your conventional laptop.

Raise a Glass to Pure Water

Water is a part of our lives in many ways that we often don’t think about. Without pure water we would not have playgrounds for surfing, wakeboarding, or snowboarding. These activities rely on clean water sources now, and for future generations. The relationship with water runs deep with Finlandia vodka.

When you think of thrift stores, you likely picture some dusty bins with old hand-me-down clothes and half-broken furniture. But one nationwide brand is looking to change that image. Goodwill is currently in the process of changing some of its stores from traditional thrift stores into boutique hotspots.

Some businesses start out with a clear path and strategy. Others have to make adjustments along the way. Financial startup inDinero fits into that latter category. But the company’s leadership feels that it is better off as a result. InDinero started off as a “Mint.com for business.” But as time went on, the company’s customers made it clear that they wanted more services.

You’ve built up your Facebook likes and Twitter followers. You’ve been circled on Google+ and you’ve got people following your pin boards on Pinterest. You’re building relationships and engaging on social media, and you’re thinking it may be time to take it to the next level.

The Fourneau Bread Oven Helps You Bake the Perfect Loaf

Ah, the joys of slicing into a freshly baked loaf of golden brown bread straight from your oven. Baking artisan bread is an activity many home cooks and foodies enjoy. Design team Ted and Sharon Burdett share this passion for home baked bread but the duo started to wonder if there was a better way to make the perfect loaf.

Dungeons and Drafts is a New Bar Just for Geeks

There’s no shortage of bars out there where customers can go and enjoy a beer while watching some football with friends. But what about those who want to enjoy a different type of game and different kind of company? Dungeons and Dragons is a fantasy tabletop role playing game that has been around since the mid-1970s.

For those who can’t stand being cooped up for long, the idea of traveling the world while working so-called “digital nomad jobs” isn’t as farfetched as it may seem. ‘Digital nomads‘ work as freelance writers, artists, entrepreneurs, and more. They create startup companies and launch them from the Web or do freelance work from their laptops.

Silicon Valley may soon be giving up its throne as the world’s hottest startup scene. And the latest up-and-coming startup hub might surprise you. Though still relatively small in number compared to other parts of the world, African startups are growing in number. Particularly in Nigeria and Kenya, entrepreneurs are starting to gain investors and build viable startups.

The Meldium Password Management Tool Can Secure Your Biz

How many passwords do you have? If you’re like most business owners, the answer is “too many.” In the course of a month, the average individual visits over 25 different password-protected websites. That’s a lot of information to remember. To make it simpler, some people use the same password for multiple sites; in fact, 65 percent of people use the same password everywhere.

How the Cloud Can Deliver to Your Bottom Line

You’ve probably been hearing a lot more these days about “the cloud.” But do you really know the full extent of the benefits to your business? Here’s how to find return on investment (ROI) from moving to the cloud. As someone steeped in the world of small businesses, I’ve noticed a major change in attitudes about this nebulous thing called the cloud.

You are probably familiar with Dropbox, the file hosting service that will sync your files, offer cloud storage and provide other useful features. Now, Dropbox is testing a new service called “Project Composer,” and the company is being very mysterious about it. Not much is known about this new productivity app.

You may remember Voice, the Adobe app that creates animated videos using your own voice recordings. Now Adobe is releasing a sister app to Voice, called Slate, that lets you create a story with visuals and design elements. The company says Slate should make creating newsletters and reports easier.

Comcast has just made an announcement that will put the company in competition with Google Fiber. The Internet provider plans to make Comcast Gigabit Pro, its new 2-gigabit (Gbps) broadband service, available to 1.5 million Atlanta residents sometime next month.