Screw The Valley: How Cities Are Transforming Into Startup Meccas

The book Screw the Valley looks at the current state of Silicon Valley, then examines several cities considered as the hotspots for startup activity. 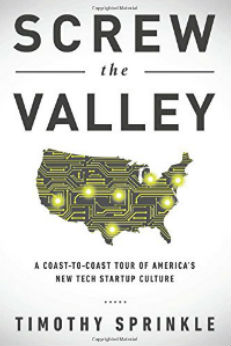 In many ways start up culture is like a local music scene. A place can influence what comes out and create a strong association. Just think about Memphis and you think blues, which can feel a bit different from Chicago blues. Or say the word Motown. Despite Barry Gordy’s decision to move his record studio to Los Angeles, the word Motown will always be synonymous with Detroit.

Timothy Sprinkle (@timsprinkle) has captured that same idea in his book, “Screw The Valley: A Coast-to-Coast Tour of America’s New Tech Startup Culture.”

A business journalist, Sprinkle has covered the technology space for over a decade. I learned about the book “Screw The Valley” after researching new books at NetGalley, and decided to contact the publisher for a copy. My choice was well rewarded with a book that embraces the current state of American startup economics and that excels at explaining its vibrancy.

“Screw The Valley” looks at the current state of Silicon Valley, then examines several cities considered as the hotspots for startup activity. The highlighted cities include Las Vegas, Raleigh-Durham, Austin, Boulder and Kansas City. I connected with the perspectives regarding Detroit and New York, having lived in both cities, so I really believe Sprinkle got got a good sense of each place. And all have the same challenges. When Jeff Epstein, a Detroit area entrepreneur, is quoted, for example, he speaks about the struggle to retain talented professionals.

“My peers, my generation, all went to other cities,” he says. “Even if they stayed to go to U of M or MSU [University of Michigan or Michigan State University], they went to Chicago or New York or L.A. after graduation. Nobody, nobody, stayed. It was sort of a lost generation. And those people are starting to come back.”

For those who read a book I reviewed a few years ago called “Hallowing Out The Middle,” Epstein’s observation of talent leaving a region should resonate with what authors Patrick Carr and Maria Kefalas wrote in their book.

Sprinkle thoroughly showcases each region’s value to the business landscape. A few well-known entrepreneurs are also featured, with instances displaying their visions in ways that you’ll find illuminating. For example, Sprinkle notes how Zappos CEO Tony Hsieh’s vision for revitalizing downtown Las Vegas led to a $350 million investment in local real estate, residential and small business funding called the Downtown project. I loved the opening Hsieh quote to the Las Vegas chapter of the book:

“A lot of city revitalization projects depend on having an expensive sports team or building an expensive stadium or having a Harvard or Stanford nearby … we want to show there’s another way.”

I liked how Sprinkle merges personal preferences into the retelling of how local entrepreneurial scenes form. The result is an avoidance of sales-ish spin about a location. In fact, you are bound to read more about community cheerleading from the entrepreneurs. For example, Bing Chou, former managing director of Boulder-based startup Quick Left, notes how other Colorado communities are building a culture across the state:

“Since stopping in at the Denver Open Coffee Club an hour ago, which was only twenty people, I’ve been sitting here for maybe ten minutes and I’ve already run into maybe half a dozen people that I see all the time in Boulder. So I’m really looking forward to the two communities getting more involved … it’s really exciting to see Colorado in general feeling like there’s more and more activity … ”

I can say from personal experience a lot of places claim to have a tech culture, but the culture does vary by industry needs. “Screw The Valley” displays Sprinkle’s effort to capture a location’s essence with honest insights through the people he interviews.

Sprinkle excels at gathering a historical perspective without being bogged down in minutia, reflecting the research that is the hallmark of a good journalist. He peppers this perspective with solid supporting details, including quotes from Brad Feld, author of “Startup Communities: Building An Entrepreneurial Ecosystem In Your City.” He also offers statistics for support, such as the 2012 investment funding numbers from the National Venture Capital Association.

Even the epilogue has some important observations, as Sprinkle concludes “the great thing about this book is that it is not about one person. It’s not even about one city or one company … ”

Read “Screw The Valley” with another solid start up book, Frank Gruber’s “Startup Mixology,” and you’ll have a divine comparison of growing a start up versus a Silicon Valley-backed venture. You’ll also have a one-two punch for appreciating the effort and resources that go into building an ecosystem for new businesses.

Pierre Debois is Associate Book Editor for Small Business Trends. He is the Founder of Zimana, a consultancy providing strategic analysis to small and medium sized businesses that rely on web analytics data. A Gary, Indiana native, Pierre is currently based in Brooklyn. He blogs about marketing, finance, social media, and analytics at Zimana blog.
3 Reactions
Subscribe
Follow @smallbiztrends
RSS LinkedIn Pinterest iTunes