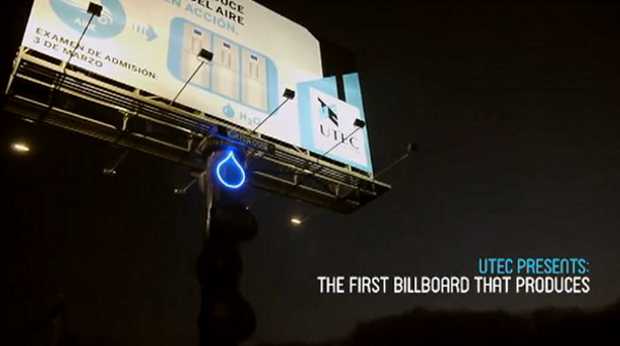 Billboards haven’t evolved much over the past several decades.

They started out as just large outdoor signs that could advertise restaurants, schools, attractions, or products. And for the most part, that’s the purpose they still serve today. Some of them utilize electronic or 3D elements, but many are just large, static signs that line roads and highways.

But what if those billboards could serve another purpose? That’s what the University of Engineering and Technology of Peru (UTEC) was aiming for when it turned to ad agency Mayo DraftFCB for its latest outdoor advertising campaign.

The team devised a plan to create a UTEC billboard that could convert the ultra humid air in Lima into potable water. It seems that, while the average humidity in Lima is a soggy 83 percent, the region only receives about a half inch of rain annually.

It seemed the perfect location for the project. Since sources of fresh water in Lima have depleted over the past several years, a source of water was certainly needed.

The billboard produces about 100 liters (or 26 gallons) of water daily. That means that over its first three months, the billboard system produced about 9,450 liters of water, which Mayo DraftFCB says is enough to equal the water consumption of hundreds of families each month.

It does all this just by using a basic filtration system, a bit of electricity, and gravity. The billboard’s filter pulls in the humid air and then condenses it, pushing it through carbon filters. It then collects the water at the bottom of the billboard.

As for the actual advertising component, the billboard shows a simple chart explaining how the filtration system pulls water from the air — along with the school’s logo. The purpose is to showcase the kind of innovative thinking that students will learn and encounter if they choose to attend UTEC.

“We wanted future students to see how engineers can also solve social needs in daily basic kinds of situations.”

It’s also the kind of innovative thinking that can make a difference in the success of advertising campaigns. The school could have very easily decided to go with a more standard billboard advertisement. But that wouldn’t have set the institution apart from all the other schools and businesses also using outdoor ads.

Instead, the campaign does much more than simply try to draw attention. It is actually making a difference in the local community. And that kind of innovative thinking is what can really get people to take notice.