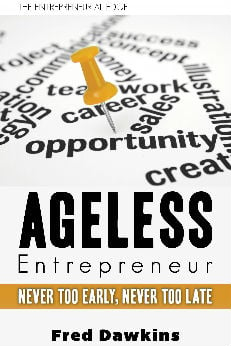 Dawkins is the author of “Ageless Entrepreneur: Never Too Early, Never Too Late [1]“. He believes that the answer lies in expanding the idea of entrepreneurship, no matter if you are 17 or 71. He wants small businesses to stop fearing the “big companies” and thrive within their niche.

Fred Dawkins is a Canadian entrepreneur and author. He can be found online at his website (http://fcdawkins.com/) or on Twitter (@dawkinsfred [2]). His book, “Ageless Entrepreneur: Never Too Early, Never Too Late” will be available on Amazon May 9. This article was prepared from an electronic copy of the book made available for reviewing purposes.