Barbara Corcoran of Shark Tank: Real Entrepreneurs Better Off Trying, Failing Than Never Trying at All.

Barbara shares with us her thoughts on entrepreneurship today, what was the most successful business she invested in, her definition of success, and why it drives her crazy when she invests in a company that doesn’t share her passion for business. 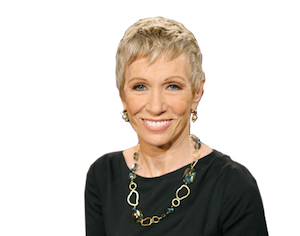 Small Business Trends: When it comes to Shark Tank and all the different contestants that you get a chance to sit in front of and have pitch to you and your co-stars there, what does that tell you about the state of entrepreneurship today?

Barbara Corcoran: Entrepreneurship is not just the people pitching on Shark Tank, but the cab driver that took me over to the set, the waitress who’s pitching me her new idea. I mean, it’s been a release of a flood of people ushering in their great business idea. Now many of the business ideas on first blush to me sound like they’re pretty stupid and they’re not going to go anywhere. But who am I to say?

I failed at my first business of Flower of the Week Club. And then I succeeded at my second business. And so what I’ve learned more than anything is to just tell people the dream is great. Try it. You don’t want to die thinking you wish you should have, could have.

Small Business Trends: You mentioned there are a lot of ideas that get brought to your attention through the show. Is it harder to get ideas to market today than it was years ago, even though technology seems to make it easier?

Barbara Corcoran: In the easier column, I would put crowd funding. A boom to small business if you can pitch well and convince regular people that you’re on to something, almost everybody will give you ten bucks to a hundred bucks and invest in you. You never had that before. I think on the easy column it’s a more level playing field. You can be found online. If you’re really scrappy, can write a good blog, get people to like you, get creative, you have a level playing field.

And then also it’s getting a little bit easier to fund small businesses. I’m not talking about the fancy kind from angel investors. Fund Box I know came out recently. You can actually fund your outstanding invoices which might not seem like a big deal. But when you’ve used your credit cards to fund your business and you have invoices and you can’t convert them to cash, that becomes a big deal pretty quickly.

On the negative side, there’s so much clutter and so much trying to get everybody’s eyeball and attention and ear constantly. It’s harder to get them to listen to you. And that becomes a bigger issue, but not just for the little business, for the big business too. They’re struggling with the same thing. So it’s more good news than bad, I would say in the final tally.

Small Business Trends: How do entrepreneurs quantify their intangibles as well as the tangibles? How does that help you to understand what it is?

Barbara Corcoran: I’m not a numbers person. I’ve never read a financial statement. I ran a huge thousand-man employee business, and I never read a financial statement. But I had hired myself a minority partner who was a whiz at that kind of stuff. And so I believe you don’t have to know a damn thing about math and numbers to be hugely successful in a business. And sometimes that kind of left-brain analysis stuff can get in your way because you don’t do things on a leap and a prayer and an intuition and a trust of your gut very often. You have to analyze it and justify it.

It’s great to hear somebody has sales, but I’m more of a believer in the potential for those sales. And the potential for sales is trying to use your God-given common sense judgment to figure out whether enough people out there might buy the thing.

Small Business Trends: What is the most successful company you invested in, and why was that considered — at least by you — a success?

Barbara Corcoran: Well, it’s two ways to quantify success, I believe. One is sheer dollars returned, and the answer to that would be Grace and Lace that makes lacey socks and shawls and ladies clothing. Very sexy, great designer, but that’s not why. I mean, she’s got a great product. It sells like hotcakes, and they sold over a million dollars worth of product within the three days from the night they aired on Shark Tank. So that’s the most successful in terms of returning money to me, and I’ve gotten a 20 to $1 return in two years flat. That’s pretty remarkable.

But my idea of the most successful businesses are the ones I think have the most expandability; that I could grow them the farthest, that I could make the biggest business of them. And what is interesting is in all the good ones, all the entrepreneurs are the same. They all have the same qualities of taking a hit and getting back up without feeling sorry for themselves. They’re all street smart versus book smart. They’re all very clever on their feet. They can think fast in a situational problem and they’re all fiercely competitive. All those traits are common to all the best businesses.

Small Business Trends: If you were to look out over the next four to five years or so, what kinds of business opportunities do you think entrepreneurs — maybe first time entrepreneurs — should focus in on?

Barbara Corcoran: I don’t think there’s an answer to that because “entrepreneurs” has an “s” on it which means it’s a lot of different people. I think the heart and soul of a business that will succeed is when you have an entrepreneur who has a product or service they’re really excited about.

And generally when someone’s excited about a service or a product, it means they do it well.

You don’t get excited about things that you just don’t do well at, right? So if you have something you’re really excited about, that would be the best thing to do.

See Also: Can Companies Be Sued for Having HTTPS Websites? One Firm Is Trying

Small Business Trends: What is more irritating to you? This is a question specifically around the show. Missing out on a contestant that you really feel confident they’re going to be successful or picking somebody and then they don’t really turn out the way you thought they would.

Barbara Corcoran: When I don’t get an entrepreneur I’m really excited about, it’s like ouch. I hustled. I couldn’t get him, and I can’t stand the fact, so I’m very competitive. I’m fiercely competitive. It’s more I’m upset that somebody else got him. Not that I didn’t get him, but somebody else got him. That’s my ridiculous competitiveness, right? But once they leave that set, I don’t remember them. I don’t think about them, and I genuinely hope they do very well with their new partner. Too bad it wasn’t me.

But on the other side of the equation, when I pick up an entrepreneur and work like crazy with them and they’re not a good entrepreneur and they don’t have the work ethic or the stamina or the spirit or the drive or all the things it takes, and they’re using my time, that hurts a lot.

I have a wall in my office where I have every single one of my entrepreneurs I invested in in a beautiful frame. And the minute I see that they’re not matching my intensity and desire to succeed, I flip that photo over and I don’t spend any more time thinking about them, because they’re not going to make it.

Small Business Trends: Maybe you could talk a little bit about your partnership with Canon.

Barbara Corcoran: I know this sounds like a ridiculous thing, but why does a typical copy machine have to be longer than it is wide? It takes up too much space, and that’s how I feel. And they’re ugly to look at. So I like the little Maxify printer, and when they wanted me to partner up with them, I said, send me the machine. And I put it in competition to probably the best-selling machine on the market, and I watched my office staff. And guess why Maxify won over the other machine? Because it doesn’t take any time to warm up and I could get two Maxifys side-by-side in the same space that I could get my one old clunker with the side wing that looked like the barbeque machine that was too big and you should have never bought it in the first place? So I like the neatness of it, okay?

And even though I have a large, successful business now and invest in a lot of places, I can’t stand losing money I don’t have to lose. So I always figured out the cheapest way to do anything more than once. And before I signed up with the Maxify printer, I did the numbers and found out it’s cheaper per page than all my other machines.

Small Business Trends: One last quick question. It literally just came to me from a friend on Facebook. She’s heard it’s harder for women to get funding for businesses than it is for men.

Barbara Corcoran: It is true. There’s a very well-known Harvard study that was done roughly 18 months ago — and I hope I’m representing it properly — but it unequivocally proved that men get funding from angel investors three to one over women. And they had very sharp women go in and make the pitch.

They had very sharp men go in and do the exact same pitch, and two out of three of the funders went to the men. One in three went to the women. You can’t argue with that. They even tested it beyond that and had female voices on a video pitch. The exact same video pitch, they had a male voice — equally credible voices. The men got the funding two to one. It’s definitely true, without a doubt.

Small Business Trends: Well, let’s end this on a higher note. What last piece of advice would you give folks who are really serious, who do have a great idea, who do have the passion but maybe need a little piece — a nugget — of information to get them going to success. What would you tell them?

Barbara Corcoran: I think it’s very important to ask yourself, when you’re 60 or 50 and you haven’t done it and you’ve been carrying this idea in your heart and your head for a while, how are you going to feel about that? I’ve met so many entrepreneurs that have won, lost, won again, lost again on different businesses. And I tell you, I have never met anyone who regretted trying anything. Even losing their house — they didn’t regret that they tried it. But boy, have I met enough moany, groanies who say I wonder what would have happened. I wonder if I could have gotten rich. I wonder if… What a waste of a way to spend your life. I think you’ve got to try it and the sooner you try it the better. Before you have kids, the mortgage and life sits on your chest.