Is Your City One of the Best for Small Business in America? 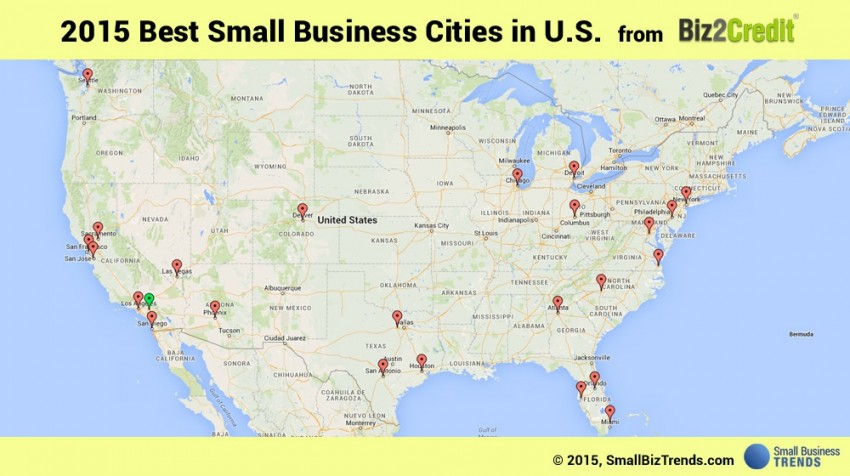 Are you surprised by any of the names on this list? Do you call any of them home or do you live close by?

A Closer Look at the Data

If you own a younger business, you’ll fit right in with other small companies in cities like Orlando or Philadephia, which topped the list of 10 cities ranked for the youngest businesses (in terms of months of operation).

If your business is aiming to be among the highest revenue generators, you’ll be in good company in cities like San Riverside-Bernadino or New York which topped the list for businesses with the highest annual revenue.

There were some surprises as well. One was the inclusion of Detroit, Michigan, one of the few old northern industrial cities on the list.

“Detroit has seen a bounce back in the auto industry, and support industries such as technology and health care have emerged in the region,” explained Rohit Arora, CEO of Biz2Credit and an expert in small business finance, responding to an email interview with Small Business Trends.

“Lower gas prices have contributed to reducing manufacturing and distribution costs, which has in turn helped domestic companies regain a competitive advantage in the industry with manufacturing coming back from China and Korea,” Rohit added.

Another surprise was Boston’s conspicuous absence.

“Boston largely benefited from the tech boom in early 2000s, but it seems to be losing its competitiveness to New York, which has established itself as the primary small business and tech hub in the Northeast,” Arora speculated. “There has also been a significant increase in v-commerce investments in NYC, which has now outstripped Boston after Silicon Valley.”

To compile the list, Biz2Credit examined more than 12,000 small businesses identified as companies with less than 250 employees and revenues under $10 million a year.

Finally, communities were ranked by average credit score, average annual revenue, and a BizAnalyzer score to determine the final results.

Want to learn more about the Best Small Business Cities list? Join us for a live webinar with Arora and other experts on Wednesday, May 13, 2015 at 3 p.m. New York time.