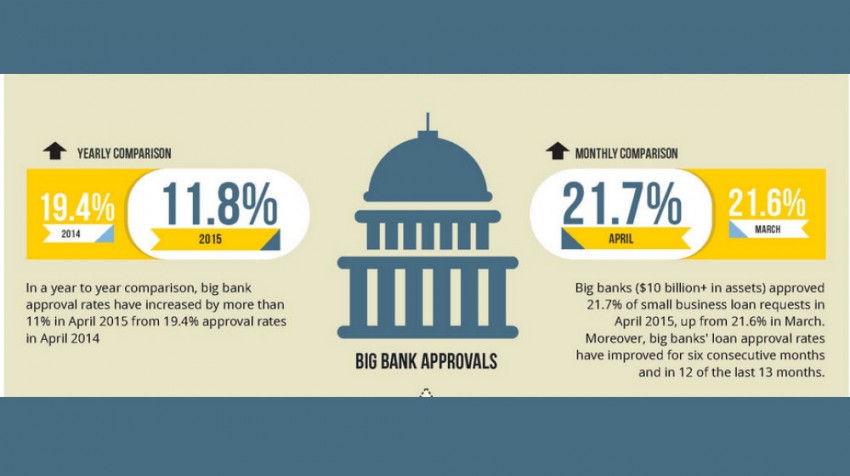 According to the April 2015 Biz2Credit Small Business Lending Index, a record 21.7 percent of small business loan requests to big banks (meaning those with assets of $10 billion and more) were approved.

Small business loans at big banks have increased for six consecutive months — and for 12 out of the past 13 months.

Biz2Credit’s small business index is based on a monthly analysis of 1,000 loan applications made by small business owners using the online lending platform.

Biz2Credit CEO Rohit Arora, who oversaw the research, said in a statement included in the April announcement:

“Now that 2014 tax returns have been filed, it is evident that the economy is doing better. I expect that loan approval rates will continue to go up in the foreseeable future. Big banks are more willing to grant bigger loans to business owners that have a track record of proven success.”

Approval rates among institutional lenders have risen each month since Biz2Credit began monitoring this lending category in January 2014.

Institutional lending is becoming so popular for small businesses that cash-advance companies are feeling the pinch. Arora noted:

“Institutional lenders are becoming mainstream lenders in the small business market and are supplanting cash advance companies among non-bank sources of capital. Since advance companies charge a premium rate, the laws of economics dictate that unless you differentiate the product, eventually a lower price competitor will steal the market share. We have seen this happen to cash advance companies.”

Small banks have shown a slight improvement in terms of their approval rate for small business loans. Approvals were up one-tenth of a percent in April, rising to 49.6 percent compared to March’s 49.5 percent. Though the gap is narrowing, this category of lenders continues to deny more than half of small business loan requests. April marked the sixth consecutive month of this trend.

Still, Biz2Credit noted that April was the first month in which lending approval rates improved at small banks over the past 11 months.

“Deals happen faster through electronic marketplaces, such as Biz2credit’s platform, which works against small banks in attracting more credit-worthy borrowers.”

Ed Lieber is a staff writer for Small Business Trends. He is a journalist and marketing copywriter with 20 years of experience writing, editing and managing for print and digital vehicles.
4 Reactions
Subscribe
Follow @smallbiztrends
RSS LinkedIn Pinterest iTunes