Confronting Capitalism is an economics book that explains the shortcomings of capitalism and how to overcome them. 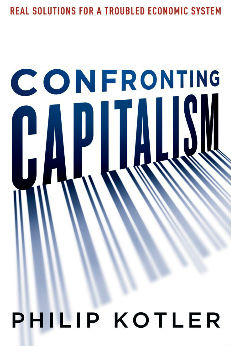 When I opened the envelope from the publisher that contained this review copy by famed marketing professor and economist Philip Kotler, I almost dropped it — the way a vampire might drop a silver cross!

The brazen title coupled with everything I thought I knew about Philip Kotler was enough to have me stumble over to the kitchen table and sit down to open the book and see exactly what was inside.

In “Confronting Capitalism: Real Solutions for a Troubled Economic System,” Kotler puts on his economist’s hat and takes a firm stand as a “capitalist with a heart” as he outlines 14 major shortcomings of capitalism.

If you, like me, see yourself as a market-driven, bootstrapping entrepreneur, you may be tempted to skip this book because you think that it will go against everything you stand for. It doesn’t. In fact, Kotler is still the same marketing master you grew up admiring.

More than ever before, he’s writing on behalf of all business; large corporations as well as one-person firms, mom-and-pop shops, small businesses and everyone in between.

As he goes on to detail exactly where our current system of capitalism is failing its constituents and what to do about it, Kotler explains:

“The aim of a capitalistic society should be to create an economic system whose operation leads to a broad level of happiness and well-being in its citizens.”

What Makes “Confronting Capitalism” a Must-Read

You could say that Philip Kotler is a founding father of marketing. He’s written more than 50 books on marketing and marketing management over the last thirty years. I know this because I’ve used many of them throughout my undergraduate and graduate studies. He’s a distinguished professor of International Marketing at the Kellogg School of Management at Northwestern University.

What isn’t as well known about Kotler (and it surprised me as well) is that he’s a trained economist and received his Masters Degree at the University of Chicago under Nobel Laureate and free-market evangelist Milton Friedman.

Kotler’s blend of marketing experience and expertise along with his firm foundation as a free-market economist gives this book the kind of insight into our economic system that is free of political pontification.

Shifting Conversations Back to The Purpose of Capitalism

Unlike so many politicians and media experts, Kotler’s only goal with “Confronting Capitalism” seems to be to bring the economic conversation back where it belongs — to the topic of making capitalism work better and generate more profit and well-being for everyone.

No matter what side of the aisle you’re on, I think you will find Kotler’s insights balanced and insightful.

Doing the Right Thing and Making Money are NOT Mutually Exclusive

In Chapter 4, Kotler addresses the increases in automation that have eliminated millions of low-level jobs. He cites an Oxford University study that estimates about 47 percent of today’s jobs could be automated.

What should we do about this? Here are some of his ideas:

Then, in Chapter 6 he addresses the environment. This is one of my favorite chapters because he shows that doing the right thing for the environment and making a profit are not mutually exclusive principles. He writes:

“There is a real need to convince businesses that sustainability is profitable and creates competitive advantage.”

When I first opened this book, I was afraid of what I would see. I wasn’t sure if I wanted to read it or if I would get my 30-minute workout throwing the book across the room and having to get up and retrieve it.

Happily, I found “Confronting Capitalism” to be a haven of balanced reason. I think you will, too.