DC Mosquito Squad: The ROI of Automating a Small Business 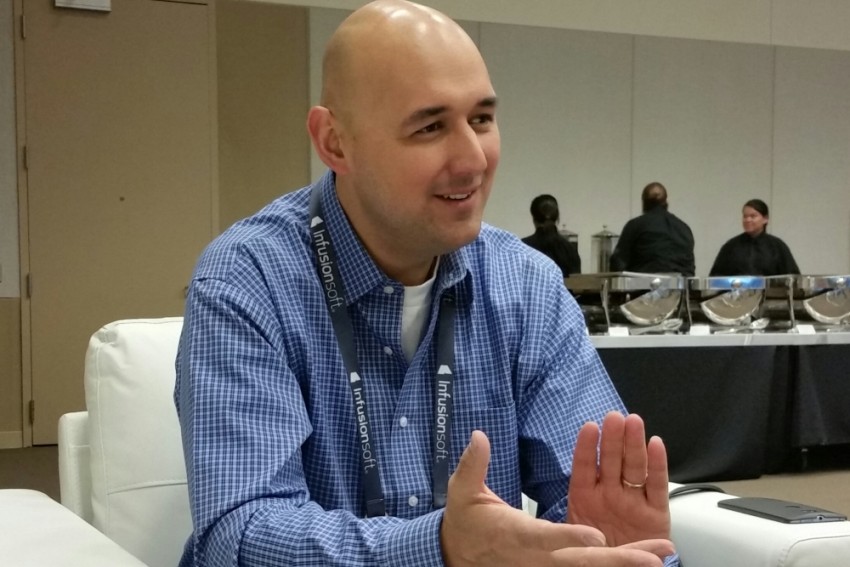 How do you scale a business to grow, and do it cost effectively?

That’s the challenge facing many small business owners.  You want to grow your business, but sometimes it feels like you can’t get out of your own way.

One small business figured out how to do it by using automation.

Damien Sanchez (pictured), founder of DC Mosquito Squad, a Washington D.C. area business, joins Anita Campbell, CEO of Small Business Trends for an exclusive one-on-one interview detailing his journey of using automation to grow the business.  Amazingly, Damien is a full-time firefighter, but still manages to run not just one, but three small businesses on the side.  Without automation and a great team, he says, he wouldn’t be able to do that.

He’s done so well using automation, that he and his business were named one of three finalists for the ICON Award at the recent ICON15 conference hosted by Infusionsoft.

Read on to hear about his company’s evolution and the return on investment (ROI) from automating a small business.

Damien Sanchez: It’s a public health pest-control company. We specialize in ticks and mosquitoes. We primarily service residential houses and we can also do contracts.

What do you do as part of that?

Damien Sanchez:  We have an integrated pest management strategy. We try and eliminate sources of water. We advise customers of things they can do to be proactive to reduce the mosquito population. But once we’ve done all those things such as site applications and eliminate water, we also have programs designed to really reduce the nuisance of mosquitoes on individual properties.

How did you get involved in the mosquito control business?

Damien Sanchez:  I had just moved from Southern California. We sold our house in the top of the housing market, so I had money and I wanted to be a good steward. And this was in 2008 where everything looked horrible as far as investments go.

The only thing I could think of was, “I should probably start a business.” My dad taught me how to work hard so I was like, “I know I can do that.” I am also a full-time fireman, so I work 56 hours a week. I have 24-hour shifts. On my off day I could work all day.

So that’s how we were able to start the business. But I didn’t identify that niche until a friend of mine told me about it. I researched it, and I realized that nobody is servicing that area.  Nobody even really knows about that as a service because you don’t call Orkin up and say, “Does it work when you treat for ants?” Whereas, I always got that question, “Does this work?” Once we started, we began building momentum. 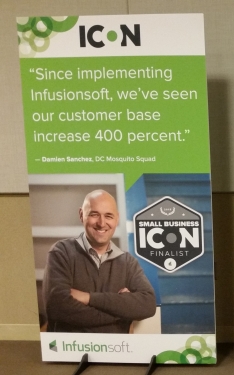 I also own two other companies. One is a manufacturing company called Sterling Lighting. We manufacture LED lights and cast brass fixtures.

Then I started a complementary business to DC Mosquito Squad because it’s very seasonal. In order to supply full-time year-round jobs, we created a company called Christmas Illuminations. We sell, install and service Christmas lighting systems during the holidays.

How early do you start for that Christmas Illuminations business?

Damien Sanchez:  Usually about the third week of October. We will start doing the advertising in the beginning of September and then start trying to build it up.

It’s a returning revenue business. So it’s people renewing their services, similar to Mosquito Squad, that we renew each year.

You’re into your eighth year in business. How did you come across Infusionsoft and what was your purpose for using it?

Damien Sanchez:  I stumbled upon it.

I was on a random blog, and I was looking for a replacement for Constant Contact. I read through all these other options, and then I read this one that said, “. . . this thing called Infusionsoft, it’s more of a CRM as well.”

When I read that, I was like, “Oh, that’s interesting.”

I clicked onto their site and I think I spent eight hours that evening watching every single video. I just drank it all up.

What sold me was they knew the questions that I had. So they would ask a question and say, “But we have an answer.” That’s what sold me. I was like, “If you know the question, then I’m going to go with you because I haven’t found anybody asking the right questions regarding what my problems are.”

So that’s how I ended up signing up with Infusionsoft. Then we ended up building it out as a business management solution first, and then sales and marketing was second.

How are you using automation today — can you give us an example?

Damien Sanchez:  We’re a service-based business and we do renewals each year. So we have thousands of people that we have to get renewed in a very short amount of time.

We build the schedule and provide the service. So we implemented and used the shopping cart that’s integrated with Infusionsoft, and we productized all of our services and put it on the shopping cart.

We do followup sequences for renewals based on property size and all of the different unique attributes of the customers. They get a link to that portion of the shopping cart so that they can check themselves out and go through the sales process. Then the followup sequences happen behind the scenes.

Everybody in the company that has a task that needs to be completed is automatically notified, and then they can complete that task. That’s how we built the entire system out to be able to plug and play people based on the tasks.

How many people are actually working in that business?

Damien Sanchez:  We will go up to about 45 to 50 people during peak season, and we have about 15 that we carry through the winter.

How many are actually using the automation system? 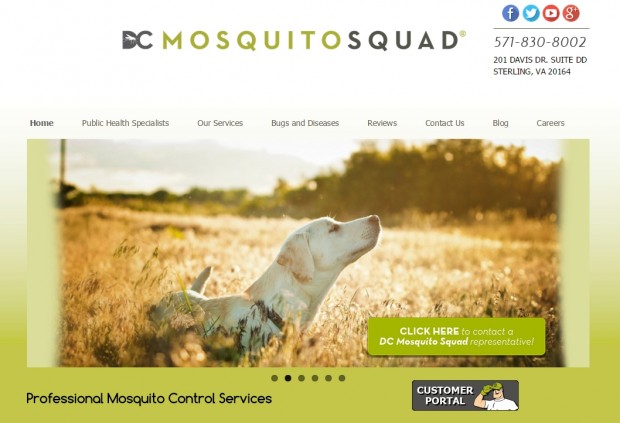 If you got rid of Infusionsoft tomorrow, what would happen in your business?

Damien Sanchez:  I guess we would probably go bankrupt.

Everything we do on the back end of the business revolves around Infusionsoft. It would be a very long, hard transition to try and go into something else because we’re so dependent on how we built the app and how we do our processing.

I’ve looked at tons of other CRM programs, and we wouldn’t be able to run our business the way we run it without Infusionsoft. It’s integral to our operation.

Do you have any sense of how much time or money automation has saved?

Prior to Infusionsoft, I had this filing box that worked very well for about 100 customers.  But then the files got bigger and the boxes got bigger, and we had scaled to the point where it just … well, we barely functioned the year before we made the switch-over to Infusionsoft, which we started in midyear. We had already recognized that we’d outgrown the old filing box system in 2010. We were looking to make changes, so by 2012 we had implemented it.

To date, we’ve spent about $58,000 on Infusionsoft, including the employee time to do the build-out and the licensing fees. So the ROI now versus pre-Infusionsoft numbers — we’re at approximately a 530 percent increase.

I equate it to actually performing better than hiring ten more $10-an-hour employees, because you just wouldn’t be able to see the same kind of growth even with the increase in labor.

It’s a testament to the team that we are all working together and seeing a vision and executing it. I get to be the base for it, but really it’s all my team’s efforts to put something together that we’re able to use and it’s very tailored to our business. 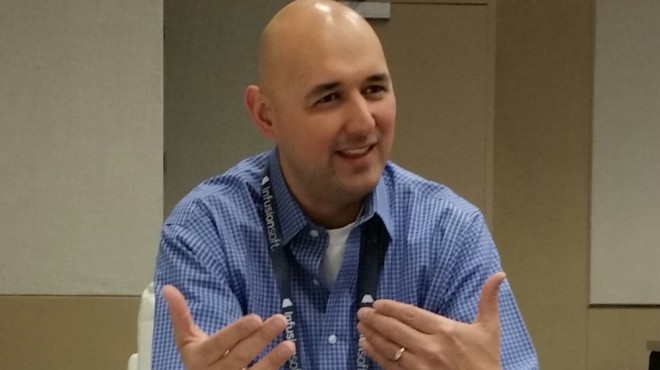 Damien Sanchez:  My dad always said, “If I teach you one thing, I’m going to teach you how to work hard.” I always heard it.

So hard work is basically a necessity when you’re starting a business.

But if you don’t have the right systems, the hard work will also kill you in the end. Because you start working harder to try and grow the business, when you really need to transition your focus from just doing it to actually building the systems that you can plug people into.

If you don’t do that, you don’t have scalability. And without scalability, you can’t grow your business. You’re going to work and work and work until you burn yourself out. That’s the biggest danger for an entrepreneur — to work so hard that you end up burning yourself out and not ever putting the systems in place that need to be there to grow the business.

This interview on automating a small business is part of the One-on-One interview series with thought-provoking executives, entrepreneurs, authors and experts in business today.  This interview was recorded at the ICON15 conference in Phoenix, Arizona. The transcript has been edited for publication.