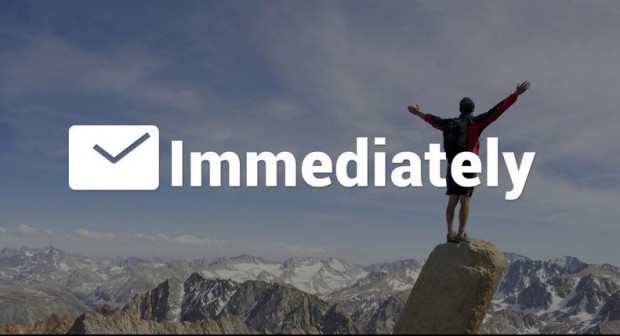 Arjun Arora, creator of ReTargeter, which presents highly targeted ads to consumers, moved on quickly after selling his six-year-old startup this past March. And now a new app called Immediately is his new gig.

The Immediately app is designed to integrate deeply with Gmail and Salesforce to help salespeople better manage their workflow. It does so by providing the ability to monitor leads and log phone calls. It also notifies users when recipients open emails, among other things.

The startup is located at 2 Mint Plaza in San Francisco.

“I joined as a late co-founder,” Arora told Small Business Trends in an exclusive interview.

He first met co-founders CTO James Mock and CEO Branko Cerny in October 2013 when the two were just starting out.

“Two brilliant young first-time founders had gotten the company to a great place and it made sense for me to join and help take the company to a new level,” he said. “When I was ready to get back into operating I happened to reconnect and it all made sense.”

Mock and Branko initially focused their efforts on an email organizer app but later decided to focus specifically on sales with Immediately. The platform aims for nothing less than to replace the CRM concept with a mobile program that is “data-driven” and “highly automated.”

It’s deeply invested in “becoming the one product that a sales rep wants to use day in and day out,” Arora noted on Immediately’s website.

Noting that more than 70 percent of lost deals happen due to slow reaction time, the program aims to fix that by freeing up salespeople to focus more on the selling process itself.

The Immediately app has gotten kudos from the likes of Peter Kazanjy, Monster’s Vice President of Products and Technology, who said:

“Two things are important in sales: activity and timing. Immediately gives you both. The ability to react in real time to a prospect with a logged call or a templated, instrumented email is game changing.”

Arora’s earlier company ReTargeter was purchased  for an undisclosed price in late March by Sellpoints, which distributes media content for manufacturers.

The acquisition benefits SellPoints by enabling it to combine its massive collection of consumer data with ReTargeter’s ad network to bolster and expand efforts to reach online shoppers.