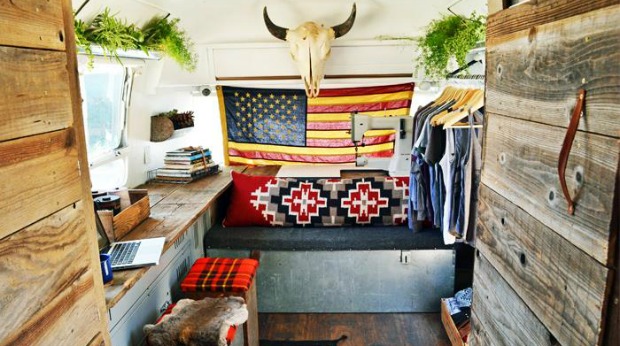 Businesses are going mobile. And that doesn’t just mean they’re using smartphones and tablets to stay in touch. Some businesses are actually taking their whole operations mobile.

You likely already know about the food truck craze. But now there are some retail businesses that are following their lead. Blaine Vossler and Mackenzie Edgerton are two of those mobile entrepreneurs.

The couple started their business, The Local Branch Co., in San Francisco in 2014. The business sells hand-printed apparel and accessories. But the business doesn’t have a traditional storefront. Instead, it sells those handprinted shirts and bags out of a 1979 Airstream trailer.

“It was just a random idea. We hadn’t really seen anyone doing mobile retail, but we were inspired by food trucks.”

But now, Vossler and Edgerton aren’t the only ones discovering the versatility and other benefits of running a mobile retail business. Mobile businesses are becoming increasingly popular especially with young business owners who might not have the resources, or even the desire, to open a more traditional retail storefront.

Not only does this type of business model negate some of the costs associated with maintaining a traditional storefront, it also gives business owners the ability to put themselves in prime locations. Whether it’s a busy downtown shopping district, independent art fair or other type of event, a mobile business like The Local Branch Co. can be there. It can, and does, also travel to different cities around the country, something that traditional retail stores obviously can’t do.

Not every type of product necessarily lends itself to being sold out of an old trailer. But this mobile movement at least shows a new way of thinking about running retail businesses. No longer is it necessary to have a static storefront or even to rely solely on eCommerce platforms. A new generation of business owners is finding unique ways to put themselves in prime locations to succeed.