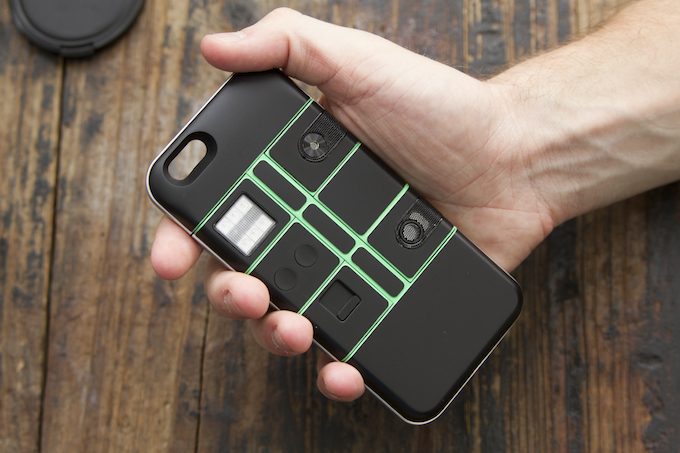 The idea of a modular smartphone with interchangeable components is nothing new. The concept’s been floating around for awhile with projects such as Google’s Ara. But one company is attempting to bring modular to your hands in the form of a case rather than a phone.

The Nexpaq modular smartphone case boasts being able to customize, enhance and add features to your phone with swappable “modules.” Like the concept of Google’s Project Ara, these tile-like modules can be clicked in and out of the back of the case. These give a boost to your smartphone’s hardware.

The company claims each case has a built in 1,000mAh battery. This adds 30-60 percent more battery life to your phone. And it also powers the modules.

There are also some quirky options including a laser pointer, breathalyzer, temperature and humidity reader. There are also dummy modules to fill any empty slots in the case.

Nexpaq claims all the modules work with both Android and Apple phones. Customers can swap modules from one phone to the other without the need to buy separate hardware.

The modules can also be controlled through Bluetooth from an app if you don’t want to have the case physically on your phone for some reason.

For more information on the Nexpaq modular smartphone case check out the Kickstarter video below.

Nexpaq has already raised over $106,000 on Kickstarter, more than doubling the company’s funding goal.

You can pre-order a Nexpaq modular smartphone case and four modules for $109 if you don’t mind waiting to get your Nexpaq until next January. Customers can also order the modules individually with prices starting at $3 for a dummy module on up to $32 for 32GB USB flash.

For those not too keen on waiting until next year, there’s no need to worry. The company is offering what they are calling the iPhone 6 beta bundle for $99. Th company plans to deliver the package in November. It is unclear what Nexpaq means by beta, since the company is saying it isn’t a true beta.

There are some drawbacks, or rather unknowns, with Nexpaq. It’s impossible to tell just how well the modules perform. For example, one module is a speaker amplifier the company boasts makes your smartphone 30-60 percent louder while maintaining optimum sound quality.

This seems great but without any customer reviews to go by, you will have to take the company’s word for it.

The company has stated it is looking into expanding this lineup. Apparently customers will have the chance to vote on what phone they would like to see next.