Meet the Tylers: A Family Business Gives Voice to its Community 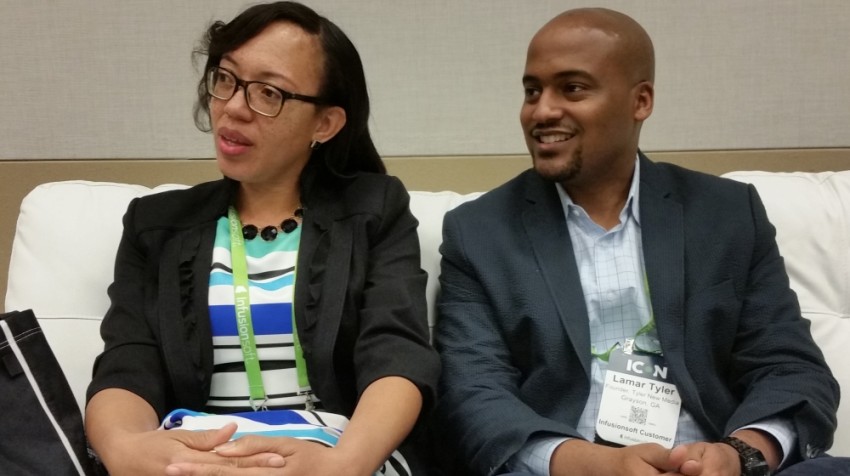 Meet Lamar and Ronnie Tyler (pictured).  The husband and wife duo have been named to Ebony Magazine’s Power 100, along with such luminaries as President Barack Obama and Beyonce Knowles.

The two left successful corporate careers a few years ago to grow their fledgling hobby-turned-side-business, into a full-time business. And grow it they have. Impressively.

Tyler New Media, their company, has become a thriving business  — one that gives voice to their community.

Their business ownership journey began in December of 2007. It started modestly, with a blog called “Black and Married With Kids” or BMWK for short.

Fast forward seven years. That modest blog has evolved into a thriving umbrella brand for a media company with an engaged online community, including 450,000 Facebook fans.

And the two have built a business out of meeting the thirst of their community for information and inspiration, and providing a virtual place to “belong.”

The company revenue model consists of a membership site where couples can work together with expert trainers at their own pace.  The business also sells self-help DVDs and workbooks created by counselors and therapists.

But the company’s prize offerings are its documentaries.  The documentaries have gotten so popular that they’ve outgrown ordinary theaters for showings.

Recently, Small Business Trends caught up with Ronnie and Lamar Tyler at ICON15, the small business event. The Tylers had been named finalists in a national competition of business owners who had transformed their businesses by intelligently using automation. So, I was eager to speak with them to understand how they had grown their business.

Dividing up the Work Between Husband and Wife

Ronnie oversees the overall planning and implementation for the business.  “I was a project manager for 17 years at IBM. I do a lot of our planning and product development. If we plan to release a product, I get the plan together so that we can implement it. I also focus on the content for our website,” she said.

“We offer nine ebooks and we also have them in audio book format. They’re on different topics like communication, infidelity and intimacy. A lot of our products are around supporting marriage and giving people the tools to be able to overcome challenges in their marriage,” Ronnie said.

Lamar is responsible for marketing and video production. He also consults with other small business owners in their community to guide them on their entrepreneurship journeys.

“We have four documentaries currently around marriage and parenting,” he noted.

They will be releasing documentaries number five and six later this year. “One is around generational wealth. The other is around blended families. The documentaries have tie-ins with marriage and family — which are common themes throughout our business,” said Lamar.

And it’s no longer just the two of them. They moved the business out of their home. Today they have an office in Grayson, Georgia with two employees. “On our website, we have about 40 freelance writers who contribute content on a monthly and bi-monthly basis,” adds Lamar.

In addition to the daily press of running a business, the couple are raising four children.

The Inspiration for Starting the Business

It’s been a journey getting to where they are today.

Lamar openly admits that seven years ago, when the duo started the BMWK website, they didn’t know how to monetize the business.

“We were looking at creating a blog in December 2007 and it had to be something that we were passionate about, so if it took off, four or five years later we’d still feel like doing it. It wouldn’t feel like another job we’d created for ourselves, right? That’s what we did not want to do,” Lamar said.

The passion the two shared was family and marriage.

“We didn’t feel there were enough positive examples and images of marriage in mainstream media, the movies, the news. It always had a negative connotation around it,” added Lamar. “We thought about it and prayed about it. What we came up with was promoting and equipping and supporting marriage in the African American community specifically.”

Once launched, the couple soon realized they had filled a void in their community. What started out as a passionate hobby for the two, struck a chord with others.

“Couples and singles came to us and said, ‘Finally, something that promotes a positive image of marriage in our community.’ We know couples that have been married 35 or 45 years that said, ‘Hey, the news doesn’t represent me. What I see on TV doesn’t represent me. Finally, I have a voice.'”

The two got good at building an audience. Today, they routinely get over 400,000 unique visitors monthly.

But at first they didn’t know how to monetize the time they were investing in the site.

“That’s a very common thing for entrepreneurs,” Lamar pointed out.

“You think, ‘if I build it, they’ll come.’ But when they come, then what? What’s next? When you turn it from a hobby into a business you have to create profit.  Otherwise, how do you sustain it?” he added.

As for those documentaries, they came later.

The couple wanted to further build the brand and expand the messages that had resonated so deeply with their community.

“We had a crazy idea to do a documentary — with no previous experience. Six months before, we didn’t even own a home video camera. We bought a camera to do little stuff on the website. Then we made a documentary,” explains Lamar.

The documentary took off.

“We don’t even screen in movie theaters anymore because they’re too small. We actually go to a playhouse in Maryland and we seat 500 in the playhouse. Last time we were there, we sold out. So we added a matinee and got another 300 people in,” Lamar added.

“In Chicago, we’ve done continuous sellouts year after year. Last time we were there the theater gave us a two-week run. At this point with the films, we rent out our own theaters. We can go in and sell them out, using social media and email,” he said.

The documentaries are full length, averaging from an hour to an hour and fifteen minutes.

“Our last documentary release was called Still Standing. It followed the story of six couples who have been through the major issues that lead to divorce like blended families, communication issues, financial issues and infidelity. It explores how they made it through those issues and their marriages are still standing today,” explained Lamar.

The documentaries are intended to inspire other couples, and give them encouragement.

“So many married couples feel like they’re the only ones going through these things. But millions of other people have gone through it. We show them someone who’s made it through. If they made it through, you can make it through. It’s honest transparent conversations unlike anything that you normally see or hear. And it encourages them. While they’re encouraged we can provide them with the product, services and resources that we have to offer so that they actually get the help that they need,” he added. 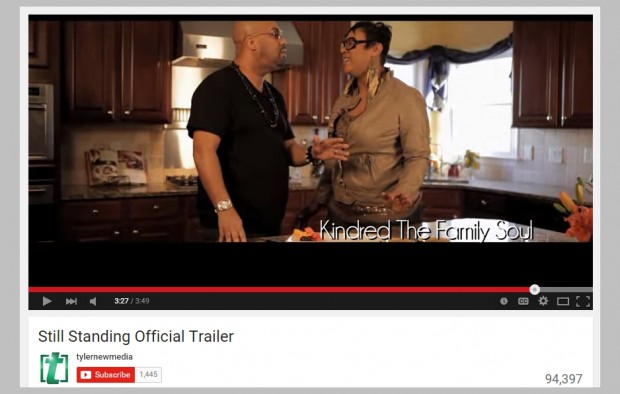 If it all sounds like it fell into place easily, it didn’t.

“Growing the business has been a challenge,” said Ronnie. “We had these two full-time, demanding jobs. I was at IBM and he was an IT manager at Fox. In the beginning, we weren’t making enough profit from the business.  There was something that was not connecting.”

The two were making $75,000 in gross revenues. But that didn’t replace the six-figure packages each of them had from their corporate employment.  And they knew that amount wasn’t enough to grow the business.

They decided they had to make changes.

The problem, said Ronnie, was that “we were attracting people to the website, but we weren’t capturing them.”

Things on the back end were not as efficient as they could be, either. The couple used a variety of different systems.  “We had one system for email, one system for our events, one for marketing. Then we saw Infusionsoft. It was able to bring us all of that functionality within one tool.”

That was in 2012. But it wasn’t until the two got focused on goals that they saw progress.

“It wasn’t until a year later when we really got serious and started going to conferences and working with consultants that we were able to open up and transform the business into where we are today,” commented Ronnie.

That commitment to growing their business made a huge difference. 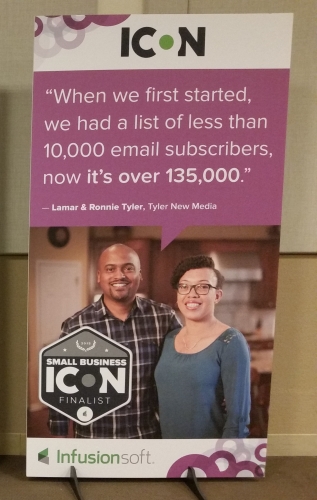 Last year, the business pulled in half a million dollars in gross sales, before expenses.

The couple agreed that making a commitment to improve their processes and learn how to grow their business was the turning point.

“I feel like we didn’t know enough about sales and marketing in the beginning. The bulk of what we’ve built has been built from 2013 to now,” observed Lamar thoughtfully.

“It’s all a learning experience,” added Ronnie. “You learn. What you know better, you start doing better. The more that we invest in the business, the more we grow. It’s definitely worth it that we’re investing in trying to learn more about what we’re doing.”

The biggest rewards for the two, though, are not about money.

Ronnie says the family has gained a lot through the business, simply by gaining control over their time.

“The biggest reward is getting the time back to focus on our family. Lamar had an hour and a half commute each way in the D.C. area to get to Fox and I worked from home for IBM for about 12 out of the 17 years I was there,” said Ronnie.

“With a work from home job, you just never stop. And Lamar hardly had any time with the kids with that commute. In the evenings by the time he had dinner, it was time for bed. Being able to do things such as parent teacher conferences or little events throughout the day, we don’t have to ask permission. And we can go on vacation with our kids and not have to worry. At the same time, we know the business is still running and product is still being sold,” she added.

Another reward is the sense of fulfillment.

“When I worked for IBM, I had created project plans. I had huge budgets … $30 million. I had developers and programmers everywhere. But creating a project plan for our movies is so much more rewarding when you know that you’re going to actually impact lives and change lives. I love it. I’m still creating project plans but it’s so much more fulfilling,” says Ronnie.

And their advice for other business owners? Invest in yourself and commit to your business.

Said Lamar, “So many things are always changing. Continue learning and invest in yourself and your business.”

Adds Ronnie, “I see a lot of entrepreneurs starting up, who are not structured enough in their businesses. I think that’s something we brought over from our corporate careers. We have meetings, we have meeting minutes, we have a plan for next year and we create project plans. The more that you can do that with yourself, even if there’s no one else in the room, the better. Planning and having goals and trying to accomplish them has really helped our business to grow.”