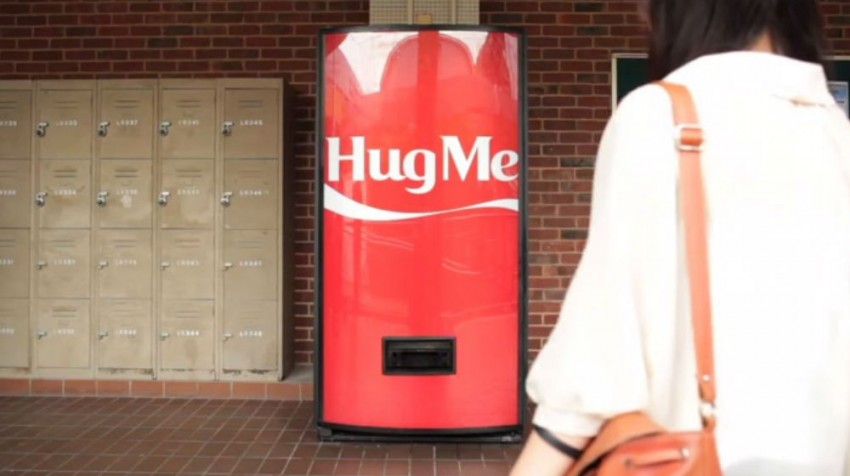 Coca-Cola is one of the most recognized brands in the world.

Originating in 1886, Coca-Cola has since gone beyond defining American culture and is produced and bottled locally in almost every country.

How did the company become so popular?

It’s true they produce a drink that people enjoy and have bought several other drink companies to expand their variety. But Coca-Cola has always been a king in the marketing world.

What sets them apart from other companies is the memorable ad campaigns they create that seem to stick around for generations.

From cute commercials with baby polar bears to ads that feature popular athletes like Mean Joe Greene, Coca-Cola has always known how to effectively use television as a marketing tool.

A recent Coca-Cola marketing gimmick that has elicited plenty of smiles is a viral video of a special vending machine. Coca-Cola’s “Happiness Machine” has made an appearance in many countries and is receiving incredible online recognition. The ad is sure to invoke laughter; or, at the very least, a smile. After all, the best memories are made of smiles and laughter:

Enjoy a Coke and a Smile

Good commercials make us laugh, and smart marketers know laughter is memorable, making consumers more likely to remember a product and buy it.

No company has been more successful at this approach than Coca-Cola. The creative genius used in their successful Coca-Cola marketing campaigns goes back as far as 1886 and they have been creating clever ads ever since. Coca-Cola learned early how to make its product memorable.

Beautiful Women Can Sell Anything

Using beautiful women to help sell a product is not a new marketing technique. Coca-Cola was founded in 1886 by a pharmacist in Atlanta, Georgia, named John Pemberton. He sold his new concoction at a nearby pharmacy, Jacob’s Pharmacy, for just 5 cents a glass.

At that time, a beautiful woman on a poster encouraged consumers to “Drink Coca-Cola.” The beautiful girls in Coca-Cola marketing campaigns became so popular they were eventually featured in the book, “Coca-Cola Girls: An Advertising Art History” by Chris H. Beyer.

At the beginning of the twentieth century, consumers wanted ways to make lives easier and their families happier and healthier.

In 1905, a Coca-Cola ad proclaimed, “Coca-Cola Revives and Refreshes,” and in 1924, an ad that encouraged customers to not only “Refresh Yourself,” but bring an easily carried six-pack home, was also a success. It brought coke to consumer’s homes and marketing fame to Coca-Cola.

By the mid-1920s, convincing customers everyone knew how good Coca-Cola really is was easy with campaigns that proclaimed six million bottles were sold each day. Each marketing slogan Coca-Cola produced seemed to be a hit with consumers and Coke was becoming a household name through its many famous marketing slogans.

Everyone Can Relate to Coca-Cola

In 1931, even Santa Claus was known to enjoy a coke from time to time.

In one ad, Santa Claus removes his stocking cap and announces, “My hat’s off to the pause that refreshes.”

To this day, Santa Claus and Coca-Cola continue to be popular around Christmas time, his busiest time of year. It’s no wonder after delivering all those toys Santa Claus wants to relax and enjoy a refreshing drink like Coke.

You Have a Friend in Coke

Another early and successful Coca-Cola marketing marketing campaign was one that led consumers to believe Coca-Cola was for people ‘just like them.’ Coca-Cola wanted to be “Friends for Life,” according to one slogan. The idea behind the ad was the hope that consumers would want to be associated with a company who considered them a friend.

Once again, the strategy worked. The Coca-Cola company in 1948 expanded on that idea when the company came up with a new slogan: “Where There’s Coke There’s Hospitality.”

Throughout the years, the company strived to evoke the image of friendship and fellowship through its many marketing campaigns, and they largely succeeded.

Even Animals Know How to Sell

Frequently, companies have chosen to use animals to help sell their product and the results have often been successful.

Budweiser, a company that touts themselves as the “King of Beer,” uses horses as their animal of choice. The Budweiser Clydesdales and the spotted Dalmatian who proudly rides in the wagon behind them are singularly recognizable to television viewers.

These commercials are some of the most memorable on television and the Internet, especially during the Super Bowl. Some Budweiser commercials make us smile and some can make us shed a tear, but that is what makes them memorable.

With Coca-Cola, the animal of choice was the polar bear. Ads featuring polar bears were earmarked for worldwide audiences and it worked. Polar bears and Coke enjoyed immense popularity due to this genius campaign.

Along with Santa Claus, polar bears are popular around the holiday season and reappear nearly every year in new commercials during the holidays.

In 1971, Coca-Cola launched the famous ad slogan, “I’d Like to Buy the World a Coke.” This campaign featured people from a variety of cultures around the world singing in unity. The commercial and overall campaign were so successful, several requests were made to record the jingle as a hit single:

When the song was finally produced, the company donated all proceeds from the recording to UNICEF, which only added to the company’s positive profile.

With the early success of using beautiful women, fictional characters, and animals in their ad campaigns, Coca-Cola began to use famous spokespeople in their ads. Coca-Cola first used a popular musician, Hilda Clark, in 1904.

Since then, Coca-Cola has used many famous people to promote their product, including sports stars, musicians, actors, and actresses.

If you’re looking for a simple way to advertise, how about with a vending machine like Coca-Cola’s most recent clever advertising with the fictitious happiness vending machine? In the video, the company took a common, everyday machine and used it to make millions of people happy.

The ad has been so popular in the U.S. that there is now a similar version going viral in Great Britain.

When watching the ad online, it’s hard not to have a smile on your face. It is this marketing genius that makes consumers remember your product. The best commercials and slogans make us happy — and they are utterly unforgettable.

Coca-Cola does appear to be the king of soft drinks and successful marketing, but there are other companies worth mentioning, too.

Dove is a company that sells beauty products for women. One of their most recent and successful ads, Dove’s Real Beauty, features real-life women. Unlike traditional beauty product ads that feature flawless, thin, beautiful models, the women in these groundbreaking ads have bodies in all shapes and sizes. When real women are featured in beauty ads, real women believe they are beautiful too and are more likely to identify with the advertising campaign.

A cute little mandarin orange, known as the clementine, is no different from any other orange in taste and texture. The difference is how the company advertises the orange. Cuties, the name under which they are sold, are specifically marketed to children with its campaign that “Kids love Cuties because Cuties are made for kids.”

While parents are paying the grocery bill, kids are choosing items at the store that appeal to them. The ad appears to be successful, because despite the fact Cuties are more expensive than other oranges, sales are skyrocketing.

Learn From the Success of Coca-Cola

Companies will always find interesting ways to market their product, but they could learn a lesson or two from Coca-Cola: successful ads make a person smile and are memorable. Advertisers have to think about exactly who they want to reach and must find a way to relate to them.

One way to do this is through humor. Make them laugh. Create a jingle they can’t get out of their heads. Make them feel like a special friend. These are tactics Coca-Cola used to successfully market their soft drinks. For over 120 years, Coke has managed to be a recognizable product worldwide due to strategic and clever marketing.

The only two countries where Coke is not officially bought or sold, North Korea and Cuba, may soon find themselves enjoying a Coke and a smile. Eventually the drink’s popularity may find a way in.

Every company’s product is unique, but they have to find a way to market that uniqueness. Brainstorm with your team of advertising professionals, find an animal that no other company has used before, feature children, or do something anthropomorphic. Above all, make it unforgettable!

Follow the Coca-Cola marketing lead and find clever advertising methods or promotions that make your business stick out in customers’ minds. Embrace the spirit of fun. When fun is embraced, smiles and laughter are sure to follow.

Brian is a seasoned digital marketing expert who loves to write about subjects that help small businesses grow their brands and increase their rankings online. He accomplishes this through his agency Integrity Marketing & Consulting, which he founded in 2011.
20 Reactions
Subscribe
Follow @smallbiztrends
RSS LinkedIn Pinterest iTunes