Google AdWords Allowing Use of Emoji in Some Ads

Emojis have become ubiquitous in text messages, private online messaging, and even blog posts and other written communications. But did you ever think Google would allow them in AdWords ads? 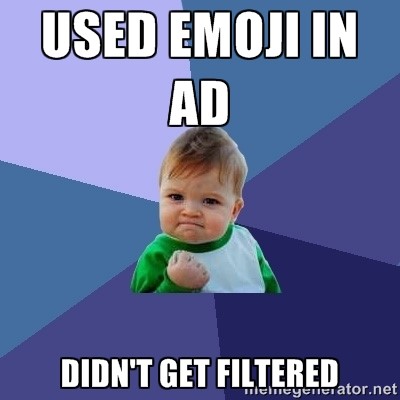 We recently discovered that AdWords is, in fact, allowing emoji ads. Our data scientist Mark Irvine ran some tests recently using (willing) client accounts and we have some early – and promising – results to share.

Mark noticed that there was no real rhyme or reason as to which emojis were accepted and which were rejected by Google as “punctuation errors.” He did get this one through for testing and as you can see, it was served about 10% more than the non-emoji ad. It also received 4 clicks to the other ad’s 0 clicks!

It’s not just smiley faces, either. What better way to sneak imagery into a text ad for a donut shop than with a donut emoji?

Advertisers have a lot more emoji options than smiley faces that they may be able to incorporate into their ad text. Check out this sampling of some of the more popular emojis below:

As you can see, you’ve got your standard smileys, as well as some representations of various types of people (and professions).

Look a little closer, though – notice the sheer variety of emojis you could put into your ad text? We’ve got body parts, hand gestures, clothing, animals (LOTS of animals), plants, technology, weather symbols, the phases of the moon, and a whole bunch of chart, graph and app icons.

You may notice that the ubiquitous “smiley face poop” emoji isn’t in this list. (I’m not sure you’d have much luck getting that one past Google in an ad anyway.)

How to Insert an Emoji in Your AdWords Ads

UPDATE: There have been some questions in the comments about how to actually do this. The easiest way is to just google “copy and paste emoji” and go to a site like this: http://getemoji.com/.

Then go create an ad as you would normally, then copy and paste the emoji you want into the ad creation text fields.

As previously mentioned, emoji ads sometimes get disapproved. But we’ve found that sometimes they get approved. I have no idea why that is, but I can assure you that we have emoji ads running. Here’s a screenshot from today:

Note how the winner is in this virtuous cycle. Due to the higher CTR, it gets a higher Quality Score, which means better ad position and lower CPC, which means even higher CTR.

Have you seen any emojis in PPC ads? Would you consider using them yourself?

It’s come to our attention that this is against Google policy, though we haven’t gotten any warnings. They will probably make it harder to get these approved and multiple attempts could get you flagged. Attempt at your own risk!