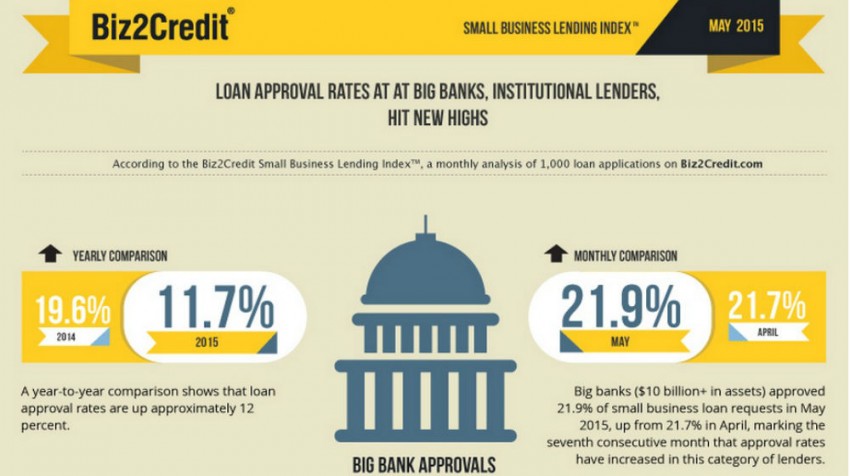 There’s a milestone in Biz2Credit’s latest report. For the first time in the index’s history, small business loans approved by institutional lenders have surpassed those approved by alternative lenders.

That’s according to the May 2015 Biz2Credit Small Business Lending Index, an analysis of 1,000 loan applications that appears each month on Biz2Credit.com.

The index’s findings show institutional lenders approved 61.3 percent of funding requests by small business owners in May, up from 61.1 percent in April.

Meanwhile, lending approval rates at institutional lenders are higher than alternative lenders by a slight margin: 61.3 percent to 61 percent.

In this case, alternative lenders are defined as cash advance companies and other non-bank lenders.

“Institutional lenders are establishing themselves as mainstream lenders in the small business marketplace and are continuing to replace cash advance companies, which typically charge interest rates that are simply too high,” Biz2Credit CEO Rohit Arora said in a news release. “Institutional lenders are offering more attractive loan packages to businesses on marketplace lending platforms, such as Biz2Credit’s. As a result, they are making funding deals with more creditworthy borrowers. With the relatively strong economy, businesses are no longer forced to borrow at any cost.”

According to the report, big banks (meaning those with more $10 billion in assets) approved 21.9 percent of small business loan requests in May 2015. That’s up from 21.7 percent in April, marking the seventh month in a row that approval rates have increased in this category of lenders.

A year-to-year comparison shows that loan approval rates are up approximately 12 percent.

“Low interest rates continue to prevail. In fact, big banks are granting a higher percentage of small business loan requests than at any time since the recession,” Arora said. “Lending to businesses remains to be a profitable component of bank portfolios when the loan amounts are substantial. Thus, it is a good time to borrow. Conditions won’t stay like this forever.”