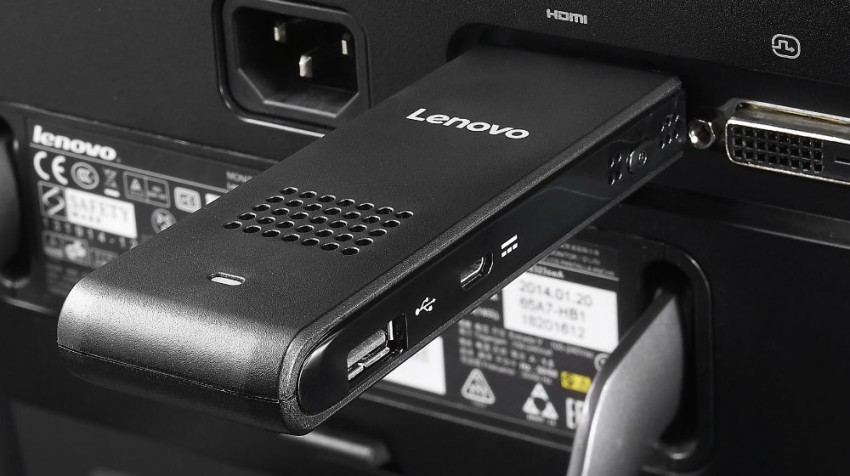 The idea of taking your computer with you wherever you go is as old as the laptop.

The notion of a computer so small it fits in your pocket — i.e. the “PC on a stick” isn’t novel either.

So what makes the new Lenovo ideacentre 300 special?

For one thing, the price. When it hits shelves next month, it will sell for $129.

Lenovo says in a statement:

“Imagine transforming the traditional TV in a vacation rental into a small multi-media hub, capable of streaming a movie, video chatting with relatives or editing a work document on the fly. Convert the dusty monitor lurking in a spare bedroom into a Web-enabled homework station, or transform a coveted man-cave into a home cinema.”

The plug-and-play technology in the Lenovo ideacentre 300 allows users to turn any TV or monitor with HDMI technology into a working PC. With a mouse and a keyboard, users can then use their TV to surf the Web, update their social media accounts, watch movies, play games, or do work.

The Lenovo ideacentre 300 measures 15 mm, runs on a Intel Atom Processor Z3735F, contains 2G of memory and 32G of storage, and is WiFi and Bluetooth enabled. Bluetooth technology, especially, will make transforming a TV into a computer a little easier.

It will initially ship with Windows 8.1 but will be available for a free upgrade to Windows 10 starting on July 29

“We’ve looked at the computing needs of travelers, business people and families, and realized that a truly portable and affordable solution would be a significant benefit to users of all kinds. Our goal with the ideacentre Stick 300 is to give those users a sense of freedom and enhanced mobility, while packing a serious punch in a small device.”

The Lenovo ideacentre 300 comes just months after Intel unveiled its Compute Stick, which sells for $150

Similar devices include Google’s Chromecast, the Fire TV Stick from Amazon, and Roku’s Streaming Stick. Lenovo’s offering seems to allow for more productivity over entertainment, what with it having Windows as its operating system.

The Lenovo ideacentre 300 will be available on www.lenovo.com and will hit retail shelves beginning in July. There’s no exact launch date from Lenovo yet, but Mashable puts the launch on July 29.