How to Lose a Franchise in One Day Flat 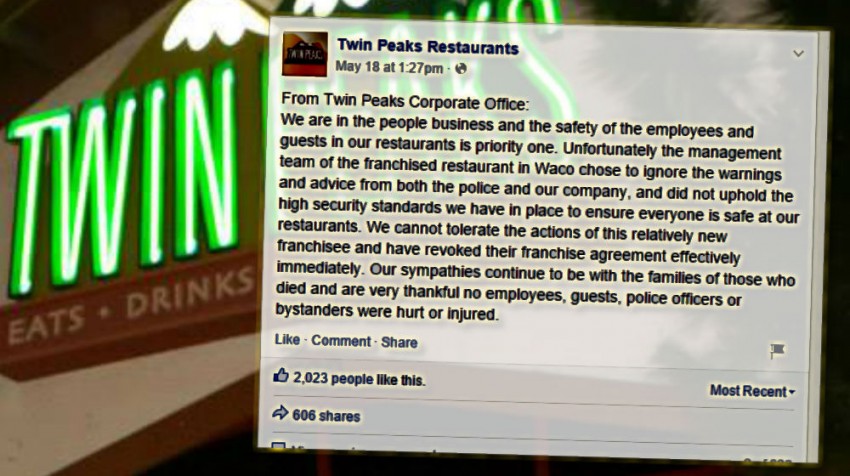 It started with a biker brawl.

Members of several Texas motorcycle clubs were attending a brunch meeting of the Confederation of Clubs and Independents in a restaurant in Waco, Texas.

A fight started between two clubs, the Bandidos and the Cossacks. According to some reports, the two clubs were supposedly battling over turf.

The brawl took place inside and outside of a Waco Twin Peaks restaurant on a Sunday afternoon a few weeks ago on May 17, 2015. Restaurant employees and other bystanders took cover in a freezer.

The brawl ended with nine people dead. Another 18 were taken to the hospital.

But the casualties didn’t end there. Another casualty was the franchise of the local Waco Texas Twin Peaks restaurant.

After Waco police criticized the local restaurant management to news reporters, the Twin Peaks home office revoked the franchise of the Waco outlet.

Waco Police Sergeant Swanton is quoted in the Dallas Morning News as saying:

“What occurred here today is the worst-case scenario when a business owner puts profit over human lives. It’s sad. This could have all been avoided.”

“We are in the people business and the safety of the employees and guests in our restaurants is priority one. Unfortunately the management team of the franchised restaurant in Waco chose to ignore the warnings and advice from both the police and our company, and did not uphold the high security standards we have in place to ensure everyone is safe at our restaurants. We cannot tolerate the actions of this relatively new franchisee and have revoked their franchise agreement effectively immediately.”

Not as Clear Cut as it Seems

You might think that’s all there is when it comes to the franchise. It’s done. Finit. That local franchise is toast.

As a practical matter, the franchise arrangement for that local restaurant is kaput.

That’s because the relationship between the franchisor and franchisee has been irrevocably damaged.

Franchising arrangements require a level of trust and ability for both parties to work cooperatively. Franchise arrangements typically last 10 years. It’s hard to imagine that either side could work together in the future, at this point.

That’s speaking from a practical perspective.

As a legal matter, things may not be so clear cut.  You can’t lose a franchise simply because the franchisor decides to pull it, if you have a contract in place. The franchisor has to have cause to terminate.

Last week, the franchisor filed a lawsuit to declare that it has the right to terminate. And the franchisee countersued the same day.

What makes it even more complicated is that the franchisee, Chalak TP Waco LLC, has one other Twin Peaks restaurant location. A related entity of the franchisee also has what is called an “area development agreement” whereby it paid for the right to open six Twin Peaks locations. (For a description of the cross lawsuits, see the Courthouse News Service summary.)

While it may turn out the franchisor has the right to revoke the agreement, that has yet to be determined by a court.

Was the Franchisee Tried and Convicted Without a Trial?

“We are disappointed that the franchisor, Twin Peaks, made a sudden decision to cancel our Waco franchise before all of the facts are learned.”

The local franchisee went on to say it was not aware of the nature of the brunch meeting in advance. The patio area, it said, had been reserved for a group by a female patron without reference to the nature of the meeting to take place.

The police mentioned the restaurant hosting bike nights previously. Yet, many establishments host bike nights in towns all across America, without violence. The local Waco management said they’d never had violence at any bike nights, previously.

It’s hard to picture any police officer – anywhere – actively approving of an establishment hosting a bike night. But that doesn’t make it illegal or violate public safety.

Twin Peaks is a Hooter’s style restaurant. A Newsweek report points out that bike nights were a specialty of Twin Peaks locations before being banned following Waco.

There are two sides to every story. In the heat of the moment things are said and assumptions are made by those who believe them to be true. Later, other facts will be brought forward that throw a different light on events.

The Aging Rebel, in a piece colorfully entitled The Waco Police are Lying, point outs that the restaurant may not have had the grounds to refuse to serve the group, and was trying to build its business:

“The Twin Peaks franchise sold food and drink to a peaceful assembly of American citizens. The Waco police wanted the restaurant to ban the bikers, who the Twin Peaks management knew from past experience to be peaceful, and lose the business. The owners of the Twin Peaks thought it was more important to make their payroll instead.”

So, back to the question: was the local restaurant management putting the safety of its employees and patrons at risk, justifying the corporate headquarters in terminating the agreement?

Or was it just doing its best to compete and attract business, in ways that the franchise headquarters may even have encouraged tacitly?

That will be up to a court of law to decide.

Meanwhile, what is clear is that Waco is now without a Twin Peaks restaurant.