Get Cooking Accurately With the Meld Knob + Clip 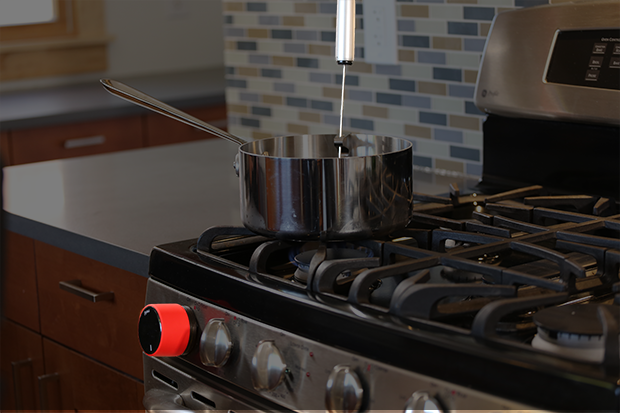 Unfortunately, the joys of cooking can quickly turn to frustration. Your family or a phone call distracts you and now the food’s burnt.

You find a recipe that looks promising but vague directions or differences in cookware ruin your efforts.

Lazy cooks or those that value accuracy might find a possible solution to their frustrations in the Meld Knob + Clip.

The Meld Knob is an automated device that can attach to your existing cooktop and cookware to adjust your burner’s cooking temperature. The result, as Meld claims, is a precisely controlled cooking temperature that is accurate to within less than a degree.

The idea for this smart cookware came from Jon Jenkins and Darren Vengroff. The two met while both working at Amazon. A decade later, the duo decided it was time to start their own company and Meld was born.

Now the company has taken to Kickstarter to launch its first product. The Meld Knob easily surpassed its campaign goal and have raised more than $150,000.

For more information on the Meld Knob + Clip check out the Kickstarter video below.

They state on Kickstarter:

“Our research showed one simple – but fundamental – issue with successful cooking: it’s nearly impossible to accurately control the temperature of your cookware. Even worse, we found that stoves set to “medium” can vary as much as 100? between different cooktops!”

To achieve their claim of extremely accurate cooking temperatures, Meld uses a system that works in three parts.

First is the Meld Knob, which replaces the temperature knob on your cooktop. The team claims the Meld Knob is easy to install, requires no tools, and fits virtually any cooktop, gas or electric.

The Knob is controlled by the Meld Clip and an accompanying app for iOS and Android. The Clip attaches to your cookware and monitors the temperature of your food while it cooks. Basically, it’s a thermometer.

This information is sent to the app on your smartphone via Bluetooth. The company claims its app then controls the Knob, adjusting the heat up or down to maintain the perfect cooking temperature.

This system seems like it could be a little cumbersome. Meld claims its app comes loaded with hundreds of recipes and you can add your own, too. But you’ll have to search to find the recipe you want and attach the Clip to your cookware before you start cooking.

Meld says that the app will let you manually control the temperature but you would have to know the exact temperature.

Meld does not really work for other methods like baking or grilling, for example.

Even with these possible drawbacks, Meld has gained attention and support. If you are interested in pre-ordering your own Meld, the Kickstarter price starts at $129. The retail price will be $149. Shipping is estimated to begin in October.