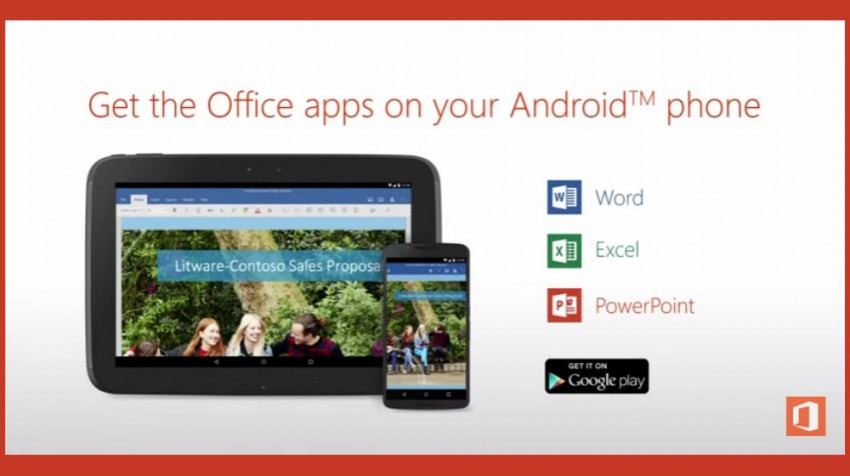 The tech tools that people use to run their businesses are constantly changing. Smartphones have made a huge impact on the business world, allowing people to run their companies largely on the go.

But some of the secondary tools and applications that have yet to catch up with that technology. This week, Microsoft took a step in the right direction by announcing an official Android version of its Office software.

Other tech headlines over the past week include the possibility of new privacy rules for domain owners, a new process for Net Neutrality complaints, and an updated Android version of Adobe programs. Read on for these headlines and more in this week’s Small Business Trends news and information roundup.

Microsoft is taking another step toward making its software cross-platform. The company recently announced the official launch of Office for Android phone. The suite of Office apps for Android was previously released for Android tablets but now, Android phone users can download Word, Excel, and PowerPoint apps for free in the Google Play store.

Domain Privacy May Soon Become a Thing of the Past?

If you’ve registered any Web domains for your small business, there’s a potential privacy policy change of which you should be aware. The Internet Corporation for Assigned Names and Numbers (ICANN) is considering changing a policy involving WHOIS, a database of personal information for those who register domain names.

The FCC Assigns Someone to Field Net Neutrality Complaints

Do you have a complaint about Net Neutrality? Remember the name Parul P. Desai. Desai was appointed by the Federal Communications Commission recently to serve as ombudsperson to field Net Neutrality complaints and questions about open Internet access.

Android Users Finally Get a Break From Adobe

Real or perceived, Adobe seems to have a clear preference for iOS when it comes to mobile platforms. Granted, Apple has made it much easier for Adobe because there is only one operating system and a couple of form factors to contend with, but Android has a four-to-one ratio of the market share.

Minneapolis-based LeadPages, a lead generation platform, has raised $27 million in a recent Series B funding round led by Drive Capital, with Foundry Group and Arthur Ventures also participating. LeadPages has raised $38 million in total funding since it commenced operations in January 2013.

Why You Should Consider Online Lenders to Finance Your Business

If you are a small business owner seeking a business loan, you should consider an online lender. While these creditors – companies like OnDeck, Lending Club, Prosper Loans Marketplace – currently account for a tiny fraction of all small business finance, they are currently the most rapidly growing source of small business debt.

Do You Change Your Summer Business Hours?

Summer is officially here and the daylight hours are getting longer. Most people think of long, sunny days as a chance to kick back and have fun. But for local business owners, it can be an opportunity to make the most of the business day. According to Google research, 25 percent of small businesses change their summer business hours, extending their hours and staying open longer.

The 2015 U.S. Trust Insights on Wealth and Worth survey has found that many business owners and entrepreneurs share at least five similar attributes. The survey is based on a nationwide survey of 640 high net worth and ultra high net worth adults, of which 118 are business owners, with at least $3 million in investable assets, not including the value of their primary residences.

Students learn in a variety of different ways. For some people, the traditional books and lectures just aren’t enough. But creative visuals, like the ones offered by SketchyLaw can help. SketchyLaw is a new business, an offshoot of SketchyMedical, that offers visuals to help law students study for the Bar exam and other law school classes.

UPS Capital is announcing the acquisition of Parcel Pro. Parcel Pro was formed to meet the insured shipping needs of the jewelry and wristwatch industry. UPS Capital is a branch of UPS which specializes in financing and insurance and is in a unique position to help protect companies from and leverage cash in their supply chains.

When you’re the fastest gun in the West, everyone wants to take a shot at you. And when you’re a company the size of Facebook, you’re like that gunfighter … always defending your title, or in this case, your brand. At least, that’s according to the Wall Street Journal, which says the social media titan has filed more than 100 oppositions with the U.S.

Digital nomads, as they’re called, are part of a growing niche of freelance writers, entrepreneurs, artists, and more. Rather than staying put and working from one stationary apartment, they choose to spread their wings and travel the world while they work from their laptops.

E-Bikes are the Newest Trend for the Super Rich

Aside from their health and environmental benefits, bikes are probably best known for being cost-effective methods of transportation. But that doesn’t mean that all bike owners are looking to cut transportation costs. In fact, a new group is now making an impact on the biking industry – the super rich.

Crowdfunders, the FTC is Watching You

When supporting a crowdfunding campaign, many have lingering doubts that their money is being used wisely. It seems far too easy for a person to create a campaign on Kickstarter or Indiegogo and use that money on things other than the project.

Door handles of public restrooms are not known for being especially clean. But that could change in the near future, thanks to an invention from two Hong Kong-based students. Sum Ming “Simon” Wong and Kin Pong “Michael” Li, who are just 17- and 18 years old respectively, recently presented their invention at the Intel International Science and Engineering Fair.