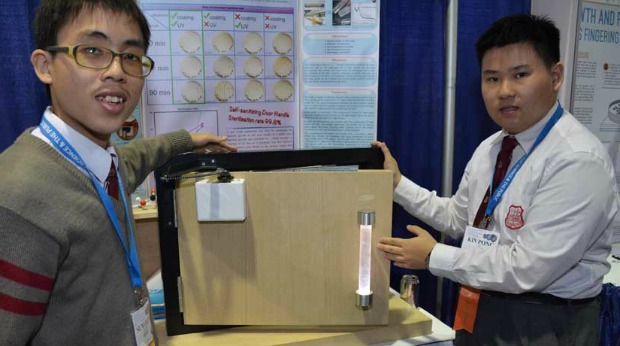 Door handles of public restrooms are not known for being especially clean. But that could change in the near future, thanks to an invention from two Hong Kong-based students.

The self-sanitizing door handle actually uses the opening and closing of the door itself to power the disinfecting reaction. Sid Perkins wrote in Science News for Students, a publication run by the Society for Science and the Public, which also put on the event:

“The concept is simple. Every time the door is opened, the movement creates power that triggers a germ-killing reaction on the handle. In lab tests, their system killed about 99.8 percent of the germs that they spread onto lab dishes coated with their material.”

So, the teens fashioned the self-sanitizing door handle itself out of a UV light encased in clear glass. And to power that light, Wong and Li fashioned a gear box that goes inside the door and converts its movement into electrical power.

There are a lot of aspects that go into the product, but the teens estimate that it should only cost about $13 to make.

The self-sanitizing door handle isn’t available for purchase or installation at this point. But the idea shows a lot of creative problem solving from some young entrepreneurs. Their invention clearly solves a problem that is pretty prominent. It uses materials that are readily available. And if their estimates are accurate, it should be pretty cost effective as well.

Time will tell if the handles really catch on. But they certainly have the potential to do so. And it’s just one more example of young people showing their creativity and unique perspective.

Image: Society for Science and the Public/Student News 6 Comments ▼