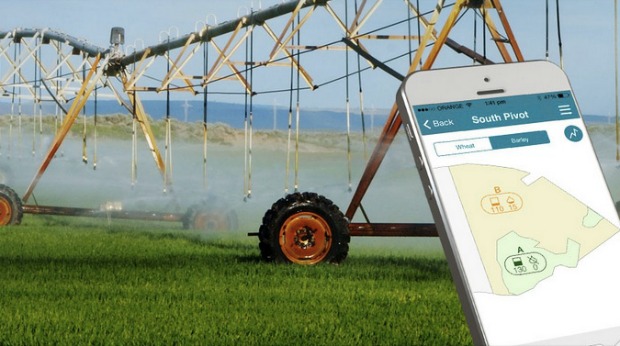 In a drought, saving water in any way possible is crucial. Both individuals and agricultural companies in several states, including California, are well aware of that challenge.

But farmers have an especially difficult job and farming water use can be an issue in a drought. They have to find a way to toe the line between saving water and keeping their crops alive.

And since so much of the farming process has become automated, it’s likely that each part of a farmer’s field will get the same amount of water, whether that amount of water is actually necessary or not.

CropX is a new agriculture technology company that is looking to solve that problem. The company sells smart sensors, which can tell farmers which parts of their fields actually need water at any given time.

So, instead of just watering a field until every section of it is saturated in water, some parts unnecessarily so, farmers can use only the water that is absolutely necessary. CropX CEO Isaac Bentwich told Wired:

“Land is not uniform. Different amounts of water need to be applied to different parts of the field. By watering fields uniformly you’re wasting water and poisoning the soil because the chemicals follow the water.”

The product works when farmers stick the CropX sensors into different parts of their fields. The sensors will then transmit data about the soil to the cloud, allowing farmers to better manage their crops and save resources in the process.

CropX isn’t the first company to focus its energy on this concept, which some refer to as precision agriculture. But CropX hopes to provide a sleeker version that’s both cheaper and easier to use. Bentwich said to Wired:

“We want to be the Apple of agriculture, in terms of sleek software and hardware integration. And to be the Google of agriculture in dealing with the massive flow of information that comes from the Internet of Things.”

This is just one example of how technology is making an impact on the farming industry. With rising food costs and dwindling natural resources, this type of innovation is necessary for the agriculture industry to thrive.

And even though CropX is just one of multiple companies with a similar goal, that healthy competition is likely to give farmers enough options to really improve their processes.