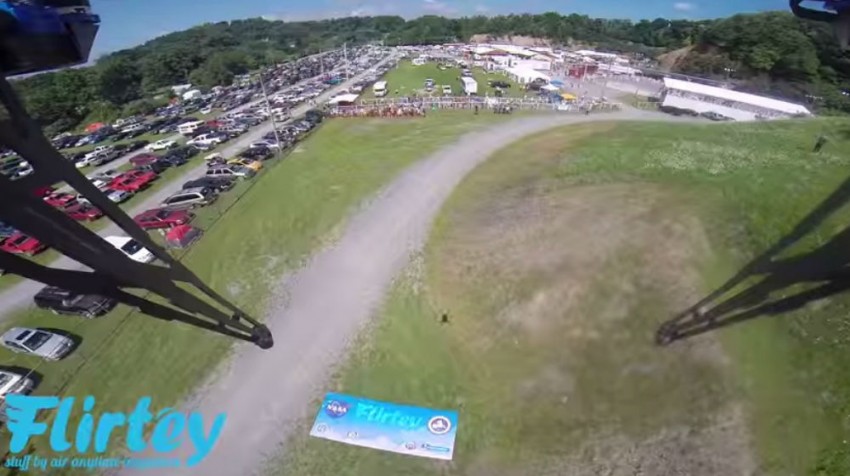 The first federally-approved commercial drone delivery happened last week, although it didn’t involve any of the players you might expect.

Back in 2013, Amazon first announced plans to begin commercial drone delivery. This was followed a short time later by news that UPS might have similar plans. But it was the small Australian start-up Flirtey that was first in flight over U.S. airspace.

Close up of Flirtey delivering in Virginia today! pic.twitter.com/7genpCweHF

According to Fortune, Flirtey delivered supplies to a rural medical clinic in Virginia last Friday. The company recently posted this video of the short flight on YouTube:

Fortune says the delivery was part of a “joint venture called ‘Let’s Fly Wisely’ between NASA, Virginia Tech university, several healthcare organizations in Virginia, and Flirtey, among others.”

Flirtey, which has conducted similar flights in New Zealand, bills itself as planning to make “delivery possible for everyone — small business, emergency medical and rescue, eCommerce, even peer-to-peer.”

And while the flight was a milestone for drone travel in the U.S., drones could have a different kind of impact in struggling Wise County, Virginia. Jack Kennedy, a Wise County resident who helped work out the Flirtey deal, told NBC he dreams of his community becoming a hub for drone development, manufacturing and training. He said:

“The transition away from fossil fuels, namely coal, is causing a tremendous hardship for the region. The poverty rate is above 25 percent. Layoffs are announced almost on a weekly basis. Storefronts close all the times. We are in distress.”

The FAA says Virginia is one of six drone test sites around the country. The others are at the University of Alaska, Texas A&M, Grifiss International Airport in New York, as well as sites in Nevada and North Dakota.

“This particular flight was a joint project involving multiple parties, NASA, a university, and a company that has a track record delivering shipments via drone. It does not mean that we are likely to see a boom in drone deliveries any time soon, because FAA drone rules are still being ironed out.”