This Video Shows the Secret Formula for Viral Success 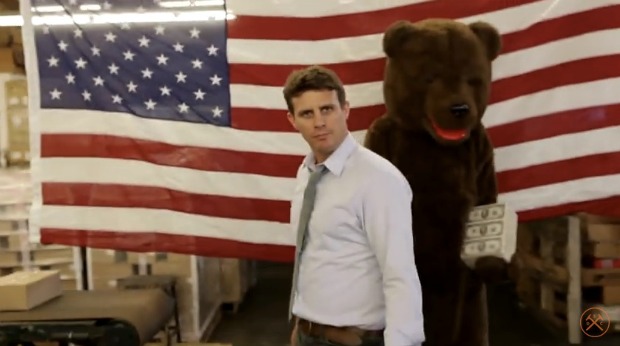 A few years ago, anyone looking to buy razors had to go to their local drug store and pay exorbitant prices. But over the last couple of years, Dollar Shave Club has begun changing that reality.

The company’s success, however, would likely not have been possible without the video below going viral in 2012.

It’s not often that the founder of a company will get in front of the camera and explain his or her product while being carted around on warehouse equipment, cutting packing tape with a sword, and hanging out with a person in a bear suit. But those unusual factors all came together to create a video that people not only noticed, but also shared among their friends.

Dubin explained the idea behind the video in a recent edition of Inc:

“I studied sketch and improv at the Upright Citizens Brigade training center in New York City for eight years. I know humor is a very powerful device in telling a story. I never thought twice about appearing in the video; I wasn’t really going to hire someone else to do that. I didn’t necessarily think that I was going to become the spokesman of the company in addition to the CEO. I was just really trying to find a fun, resonant way to tell the story of what our business did and why it existed. We chose YouTube as a platform to spread the word about DSC because, three years ago, YouTube was the only place to go if you wanted any hope of going viral.”

Though you can’t ever create a video with a guarantee of it going viral, there are a few factors that can improve the odds.

Dollar Shave Club’s video, which is aptly named “Our Blades Are F***ing Great,” includes a few of those factors, including humor, concise content, and of course, an eye-catching title.

Not every business will necessarily lend itself to creating a viral video that includes a bear throwing money into the air (aka “making it rain”) while you wield a leaf blower. But there are a few key things you can take away from this story if you use video marketing and would like your content to go viral, too.

So, even if your jokes or other lines are spot on, it’s not likely to have the same effect.

And finally, the most important part of the video is the actual information presented. Among the jokes and unusual imagery, Dubin actually does a very good job of explaining — in simple terms  —  what Dollar Shave Club offers its customers. Without that aspect, the video could have gone viral without actually providing any benefit to the company that created it.

So, if you’re able to create a video that’s eye-catching, funny, simple and informative, you’re likely well on your way to a formula for going viral.