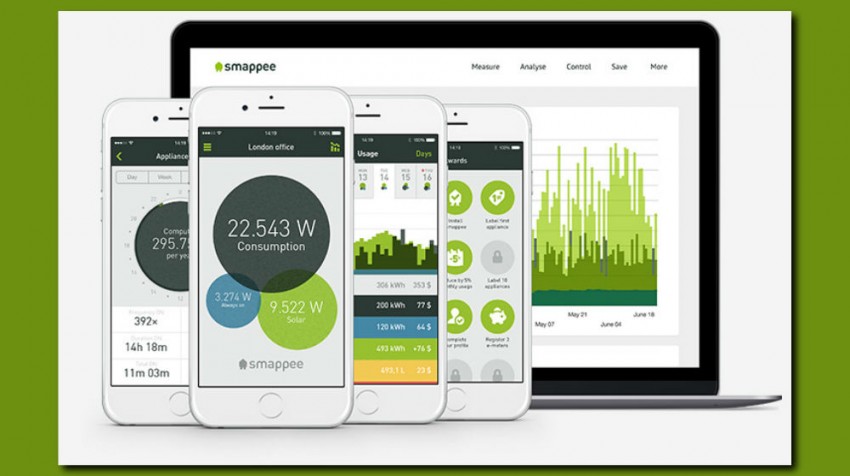 Smappee, a global energy management company based in San Francisco, recently launched its Smappee Pro, which it says is the only energy monitoring and control solution for small businesses on the market.

The device includes clamps that attach to incoming power lines as well as a Web portal in the form of a desktop website and an app for mobile devices that displays power usage within a building.

Using advanced algorithms, the Smappee Pro System is designed to allow small businesses to realize the benefits of enhanced energy efficiency. The system, for example, can sense when no one is on site. It will then shut off appliances and other electrical devices that may still be running via plug-mounted “smart monitors” also included with the system.

The Smappee Pro System also allows the small business owner to compare energy usage at a company’s different locations to see if one location is using too much electricity for lighting compared to other locations.

Richard Morgan, Smappee’s director of global business development, noted that while similar energy monitoring solutions are available for large companies—say, with thousands or hundreds of thousands of locations around the world, such as WalMart—no one has been going after the home and small business sectors.

Morgan, along with Smappee founder and CEO Stefan Grosjean, started in the energy monitoring and control business by working at a company that designed such solutions for big-box retailers and other large corporations.

The home and small business segment have not previously been targeted, he noted, because energy monitoring and control products “don’t necessarily scale down as well.”

That, he said, was Smappee’s mission from the start: “We wanted to bring the valuable position of energy analytics and control down to the domestic home environment” as well as the small business segment.

Smappee launched a home version of its product in 2013, which Morgan described as “successful,” adding that “a number of customers using the devices in their home are largely energy-aware people.

“We’ve had a number of those people who are energy managers of small to medium-sized businesses ask us about using the product in that space,” Morgan said. That prompted Smappee to “scale up” the home version into the Pro version for businesses.

Price varies depending on the number of units a business requires.

“Smappee can give you visibility as to where energy is going,” he said. “The other half of the story is about control. There are a lot of benefits to visibility of usage.”

A U.S. study by Smappee indicates that households using the technology generally save 12 percent due to the efficiencies the product allows. Morgan, however, said he believes, based on his experience, that the small business sector can save as much as 15 percent to 25 percent.

Through the use of the wall mount device, called the Comfort Plug, Smappee’s platform can then control whatever devices are plugged into it, shutting off devices that are consuming electricity unnecessarily.

To do what Smappee allows without the device would require a small business owner to install many different meters per each location. Then, a data concentrator would need to be added to read the data and a software platform that provides visibility.

With Smappee, everything you need to do this comes packaged in one box, he said.

“Smappee can put all those devices using vampire loads and put them to sleep at night, on weekend or holidays,” he added.

Noting that every small business can benefit from the product, Morgan said the optimal benefit would be realized by a small business with multiple locations.

“Smappe,” he added, “is designed to be installed simply and easily by homeowners though we recommend you hire an electrician to do this.”

Smappee is implementing a two-pronged distribution strategy, Morgan said. It is focusing on selling the Smappee Pro unit to energy service providers and utility companies, in addition to small business owners themselves.

For the first month of its availability, the Smappee Pro System will include six free Comfort Plugs.