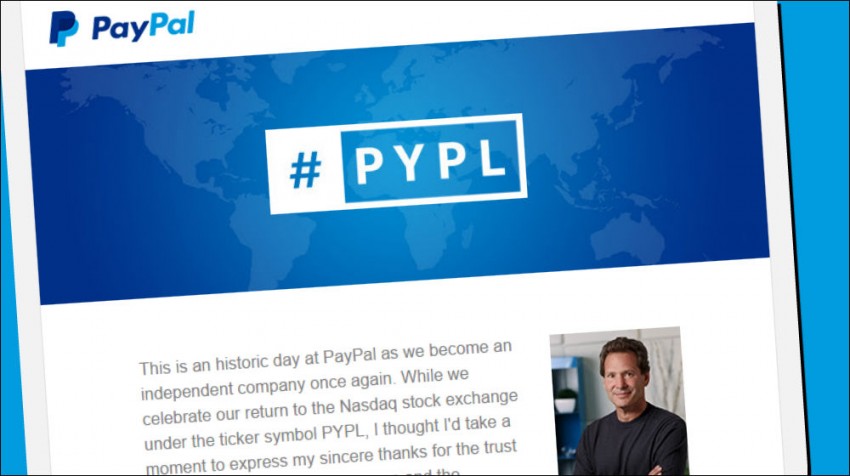 The long awaited PayPal spinoff from eBay was completed this week.

eBay announced its plans to spin off PayPal as an independent business late in 2014.

eBay is refining and re-balancing its various business arms by separating from PayPal. eBay is also selling its eBay Enterprise unit.

Another part of the deal has PayPal returning as a publicly traded company. It will appear on the NASDAQ stock exchange under the ticker symbol, PYPL.

eBay has made sales of everything, from the most common to the rare, available to the average person. The company enables small businesses, especially, to access buyers from all over the world.

PayPal was founded in 1998 in Palo Alto, California, as an online payment alternative to checks and credit cards. With this company, it’s possible to give out payment information to one site and the money passes from buyers to sellers via PayPal’s website.

In a letter sent to PayPal members on the day the split was official, CEO Dan Schulman wrote:

“Your company and those like yours around the world are the cornerstone of our business. At the most fundamental level, we are here to help you serve your customers well. Our success is built on your success. Our business grows only when we help you grow yours.”

In 2011, eBay purchased GSI Commerce for $2.4 billion. Renaming it the eBay Enterprise Unit, it was to fill a need for a branch to handle logistics and storage for third-party sellers. Purchasing the unit for $925 million is an investor consortium led by Permira Funds and Sterling Partners, both private equity firms.

Permira, a London based operation, is an enterprise that finds and backs businesses that look promising.

“We are not only a source of capital; we provide strategic relationships, highly experienced directors, and human capital expertise.”

The eBay Enterprise Unit was sold at a loss, but even taking that into account, eBay’s operating earnings actually rose 9 percent, a 7 percent increase over the same quarter last year.

The divestiture of Paypal is a split in the company, a spin-off, making Paypal an independent company. This frees both companies up to make partnerships and agreements with other partners. It also benefits eBay by letting it accept other forms of electronic payment. Paypal will trade on the stock market as a separate company.

Colin Sebastian, an analyst at Robert W. Baird & Company is quoted in the New York Times as saying:

“PayPal is firing on all cylinders. eBay is facing challenges and retrenching to its areas of strength. They are very different businesses, but in this quarter the trend was positive for both.”

eBay was founded in 1995 by Pierre Omidyar and rose to success during the dot com bubble. It was among the first online auction sites and the most successful. Using the ascending bid process, it developed search engines to help customers find what they needed and made automated bidding easy.

PayPal started life as Confinity, a software development firm. In 1999, the money transfer business was launched and the firm name changed to PayPal

This streamlining of eBay’s holdings has not come without strife. The split was opposed by John Donahoe, eBay’s CEO and he is to depart after the spinoff. Devin Wenig will take his place. Dan Schulman, a former Am-Ex executive will be CEO of Paypal. As part of it’s streamlining, eBay has said it would cut 2400 positions, 7 percent of it global work force.

JoAnn McFarland is a Staff Writer for Small Business Trends. She covers breaking news such as new product announcements, government policy, acquisitions and other industry developments. She is a published author and comes from a family-business background.
3 Reactions
Subscribe
Follow @smallbiztrends
RSS LinkedIn Pinterest iTunes