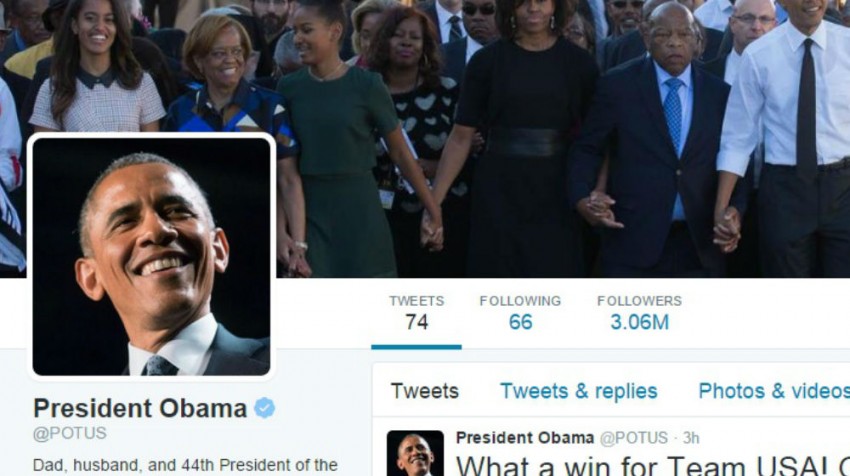 That was President Obama’s first tweet, sent on May 18 of this year, from the new Obama Twitter account. Five hours after sending it, he’d gotten more than a million followers, breaking the record set by “Avengers” actor Robert Downey, Jr. when he joined Twitter in 2014.

As of this writing, the President has 3.05 million followers. That’s not at the level of say, Taylor Swift, but there’s something about Obama’s Twitter presence that’s both similar to and one a different level from the standard celebrity Tweet.

As The Verge put it:

“Whenever the President of the United States tweets, there’s always a strange race to be that first reply. This phenomenon is true for any celebrity or well-known figure, but with Barack Obama it just feels different. His tweets are special — they’re etched in time and forever preserved by the U.S. government.”

There are few brands more powerful than that of the President of the United States, so it’s no surprise that President Obama’s Twitter presence is receiving the kind of engagement every small business owner wishes for on social media.

The President has used Twitter for everything from talking about his health care legislation to weighing in on a New York Times food feature on putting peas in guacamole (Obama is not in favor).

And each of these tweets from the Obama Twitter account gets a high level of engagement. More than 15,000 people re-tweeted the President’s pea pronouncement. Another 430,000 people retweeted his message about the Supreme Court’s marriage equality ruling last month.

And countless people respond to each of Obama’s tweets, often with crude, vulgar and sometimes threatening messages. The President’s tweets are archived by the White House. The Secret Service reads these replies and has investigated the threatening ones.

For most of us, the lesson here is that you should treat Twitter the way you would any interaction with the President: say the wrong thing, and you might find law enforcement at your door.

But for business owners, there’s a different lesson to be learned from Obama’s Twitter presence, writes Ryan Holmes of Hootsuite. He posted recently through his LinkedIn account:

“It’s in cutting through endless layers of hierarchy and getting unfiltered opinions where I think social media can be of most value for leaders—in business or politics. After all, all too often we fall into the emperor-has-no-clothes trap, surrounding ourselves with yes-people who say only what we want to hear. Any effective leader, however, needs access to the raw, unfiltered truth, however hard that may be to hear.”