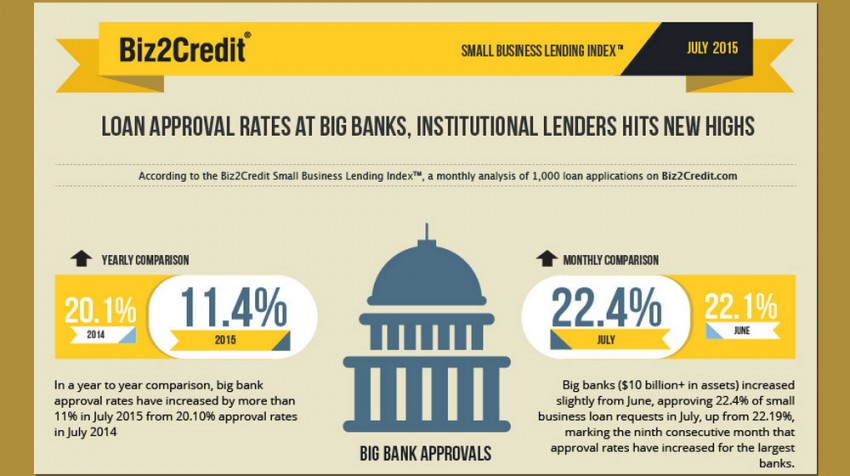 Small businesses continued to get most of their loans approved by institutional investors this past July, the most recent Biz2Credit Small Business Lending Index reports.

Lending approval rates at institutional lenders continue to surpass those at alternative lenders, including merchant cash advance companies and other non-bank lenders, notes Biz2Credit. The company creates the monthly index by analyzing data from more than 1,000 small business owners who applied for funding on Biz2Credit’s online lending platform.

Both categories — institutional and alternative lenders — approved about 61 percent of the small business requests they received surpassing the loans approved through banks big and small, as well as credit unions, according to Biz2Credit.

“Institutional investors are becoming a bigger part of the market, which can be seen by recent changes in business models from several large online balance sheet lenders,” Biz2Credit CEO Rohit Arora says in a statement.

Though alternative lenders continued to own a large share of the small business lending market, as a group they remained flat at 61 percent in July, described as “an Index-low for the second month in a row.”

Arora adds, “In the last few months as banks and institutional investors have gotten more aggressive in the marketplace, alternative lenders like cash advance and MCA players have become less competitive. For example, these companies are charging higher rates and providing shorter terms to borrowers.”

Big banks (specifically those with $10 billion or more in assets) increased their small business lending slightly from June to July, approving 22.4 percent of applications, up from 22.19 percent.

This is the ninth consecutive month that approval rates for the largest banks have risen.

“The trend clearly shows that big banks are getting more aggressive in the small business lending space and are starting to invest money in digitizing their loan offerings,” Arora notes. “We have seen more instances of banks coming back in asset-backed lending as well as commercial real estate lending markets and less so in working capital as of now.”

At the same time, last month saw small banks loan approval rates drop one-tenth of a percent, to 49.2 percent from June’s 49.3 percent. This is the ninth consecutive month that small banks denied the majority of small business loan requests.

“Small banks and credit unions are facing increasing pressure in the marketplace as more creditworthy borrowers are moving either to big banks or to institutional investors through online marketplaces to receive better terms and faster access to credit,” says Arora. “To stem this tide, these smaller financial institutions must ramp up their online lending offerings and ultimately fund more borrowers.”