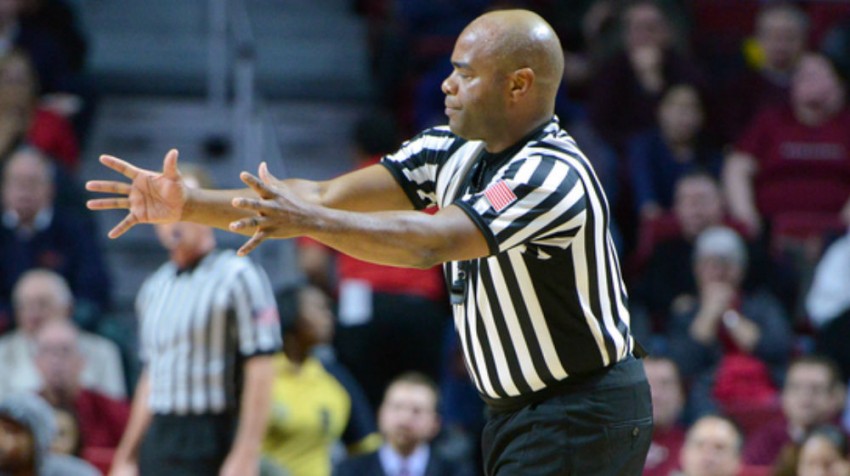 Charmaine looked out the window from her home office. As a Kentucky Wildcats fan, she understands basketball’s contact nature, but she had never heard the narrative, the coaching.

“What are you doing?” she asked me.

“Teaching him how to cheat,” I said as I deftly showed my boy my favorite defensive move: How to gently touch the shooter’s arm without getting caught by the referee.

And I have another motivation. Knowing how to “bend” the rules would be a valuable skill if — more like, when! — he decides to run his own business. I am a forward-thinking father.

“I don’t think I like that.” She was worried about our boy. “Isn’t that how all those Tyco guys got started?”

I stopped to give her argument some consideration.

She’s got me, again, I thought — using logic and reason without incurring any of the Ten Commandments, which govern our faith. Thou shalt not steal, not covet, not bear false witness, etc. and etc. I know this stuff. I teach ethics and do a bit of writing on honest business.

“There is a risk,” I admited. “But it would be the coach’s job to know the degree of the infraction that might result in getting a technical foul called, or –”

I protested, “There’s a difference between hockey and the pokey…”

“Sure,” Charmaine said. “You can name your next book, ‘Management Without Prison’.”

Darn. She was on to something. I wondered, “Well, there are very few women incarcerated for white collar crime…”

She said, “Because women don’t cheat.”

I said, “No, because women don’t take risks.”

She said, “Because women respect boundaries.”

I said, “No, because women don’t think outside the box.”

I began to realize that I was getting close to the edge, the abyss, even though I was winning the fight — debate — as I always, always do. Women respect boundaries and just don’t take questionable legal chances. After over two decades of marital (martial?) bliss I know how to end an argument with two words:

Pat Heim, Ph.D., would recognize this friction. She runs workshops on gender differences. And in her book, “Hardball for Women,” she described one of them. She asked the men what lessons they had learned playing team sports:

“How to be a leader,” one said.
“Taking criticism,” said another.
Soon the lessons were flying thick and fast.
“How to lose.”
“Doing what the coach says.”
“Taking a hit.”
“Looking aggressive even if you’re not.”

They had listed about a dozen when three men simultaneously said, “To cheat.”

The women in the group gasped. One of them spoke up. “I’m shocked. What do you mean, to cheat? You’d better explain.” The other females nodded and murmured in unison.

The men, meanwhile, were surprised by the women’s reaction; cheating seemed so obviously part of the game, it was hardly worth discussing. Eventually one participant said, “Whenever the referee, the umpire, the opposition, whoever, turns his back, you get away with what you can. That’s how the game is played.”

But is this the best way to control and influence the customs of commerce? Business as an athletic event? It was as if the financial auditors wore the striped shirts of umpires. Both business and sports are rules bound games…

But games end. Owners should have a long-term focus.

Rieva Lesonsky, is President and Founder of GrowBiz Media, a content and consulting company specializing in covering small businesses and entrepreneurship. She writes in “Does Putting Women in Charge Strengthen Your Business?” that:

“Family business leaders’ ultimate goal is to keep the business going beyond the current generation. That’s why these businesses focus on growth and sustainability, not solely on short-term results.”

Bill Maher, political humorist, once said, “When we disregard the rules altogether we get anarchy or, worse yet, Enron.”

Charmaine reminded me that the road to “financial irregularity” always starts with harmless first steps. Honesty begins with accountability and respect for the game: to answer to a higher authority, to the team, and the written and unwritten codes of conduct. Cheaters never win. Winners never cheat.

I go back to the basketball court with less winking at the rules and more thinking on the game. And so Charmaine kept two males safe inside the limits and respect for the law in sports and business.

John Wesley (Jack) Yoest Jr., is a Clinical Assistant Professor of Management at The Catholic University of America. His expertise is in management training and development, operations, sales, and marketing. Professor Yoest is the president of Management Training of DC, LLC. A former Captain in the U.S. Army and with various stints as a corporate executive, he also served as Assistant Secretary for Health and Human Resources in the Administration of Governor James Gilmore of Virginia.
811 Reactions