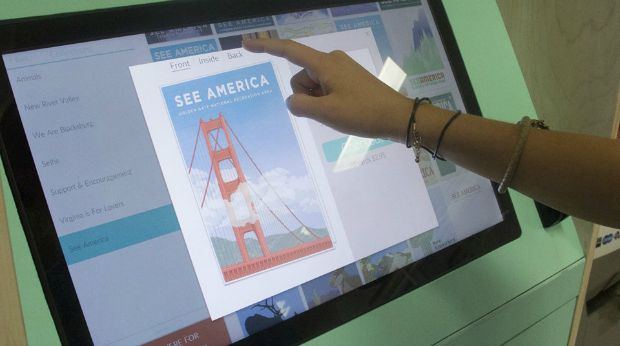 Traditional greeting card shopping means going to a store and sifting through a wall of different designs. But the team at Card Isle thinks there’s a better way.

The company’s founders, Adam Donato, David Henry and Stephan Sabo, met in a class at Virginia Tech University where they were assigned the job of coming up with an idea for a new business. Sabo suggested the idea of creating greeting card kiosks for people to buy greeting cards. The team ran with it, and then continued even after the class was completed.

The business provides more than just convenience to potential customers. Card Isle also allows the company to offer even more designs than customers can find in stores, with more customized options. And though customers can also go online to fill those needs, Donato thinks there’s still a need for Card Isle’s greeting card kiosks.

“We serve a niche that online-only greeting card providers can’t reach. We can serve customers buying one-off, last-minute cards. A kiosk is perfect — it gets you the card right when you want it.”

Currently, the team is working on getting their greeting card kiosks into grocery stores and similar locations where card shoppers are likely to be.

The one road block they’ve run into so far has been the length of time it can take to get approval from large chains. But they’ve decided to simultaneously target smaller partners while they wait on approval from the larger ones.

The company’s model has potential because of the unique way it delivers its product. But that potential can only go as far as the need.

“This past year, we deployed 10 Card Isle kiosks in local grocery stores, independent stores, and on college campuses. We are planning to deploy 50 additional kiosks this year and we’ll continue to scale from there. To put the potential in perspective, there are more 40,000 Redbox video movie kiosks out there and the greeting card market is even bigger than the DVD rental market. There is a lot of opportunity.”