How To Handle Disagreements (And Still Get What You Want) 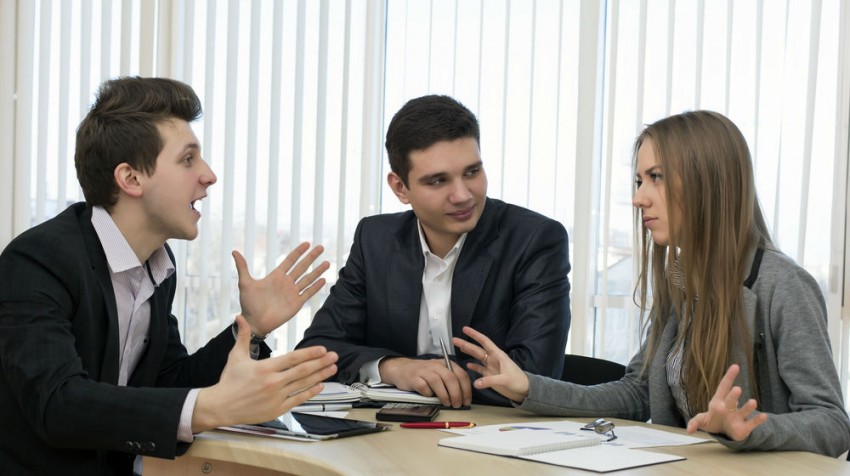 What emotions do these words bring out in you?

Most likely, it brings out frustration, anger, maybe even fear. It’s a natural reaction. Most of us don’t like conflict. We avoid confrontation as much as possible.

But we all know that conflict can’t be avoided forever. This is especially true in the workplace. When there are multiple people who are working for the same organization, it’s easy for disagreements to abound.

Conflict can be infuriating, stressful, and most importantly, unproductive. However, since we can’t avoid it, we have to find ways to deal with it effectively to handle disagreements at work with success.

Disagreements can happen with just about anyone. In the entrepreneurial world, it can happen with your customers, employees, vendors and other people that you come into contact with.

Not only can conflict be time consuming, it can seem impossible to resolve at times. Working through conflict can be like trying to untangle a child’s hair after having gum rubbed into it. Okay, it’s a silly analogy, but the point is still valid.

So why is it such a hard issue to handle disagreements at work? It’s simple. It’s because many of us are horrible at resolving conflict. Huge revelation, right?

Because of this, we are forced into the undesirable position of having to “win” the argument rather than work together to find actual solutions. We are relegated to trying to get our way while the other person loses.

There is good news though. Conflict doesn’t have to be an impossibly insurmountable challenge. There are things you can do to handle disagreements at work and make conflict much easier to deal with.

The key is to find ways to turn the conflict into a collaboration.

When you frame the disagreement in terms of working together to find a common solution, you’re able to focus on solving a problem together, not just trying to get what you want.

This article will give you some actionable tips that you can employ whenever you find yourself in a disagreement. If you practice the tips here, you will find it easier to handle disagreements at work and deal with conflict in a way that is productive.

This one should be a no-brainer, right? If you’re trying to turn a conflict into a collaboration, anger has no place in the conversation.

So am I saying that you never get angry in a conflict?

Here’s my number one tip for preventing anger from ruining your chances of handling conflict effectively.

Ready? Here it is.

Because if anger is allowed to grow, it will poison the situation. If you’re feeling too angry, try to slow the conversation down. Tell the other party that you want to take some time to consider their position. And actually do it. If you step away from the situation and look at it objectively, it will be easier for you to address it when you talk to the other person again.

If it’s the other person who is angry, it’s best to let them get it all out. Let them vent and make sure you are listening to what they are saying. The key here is to listen to understand, not to formulate a better argument.

When you put forth effort to understand the other person’s position, it does two things:

Sometimes, taking the time to listen is all that is needed to handle disagreements at work and solve the conflict. The other person may not know it, but their venting may be giving you what you need to solve the problem in a way that benefits you both.

Want to instantly get your “opponent” to lower their guard and feel more comfortable discussing issues with you? Admit that there’s a possibility that you might be wrong.

It doesn’t mean that you are wrong. It just means you’re open to the possibility that you may not have all the answers.

There’s something about showing this type of humility that makes people feel better about discussing a potentially contentious issue with you. When you acknowledge the fact that you don’t know everything, it shows that you are willing to work together to find a way to solve the problem.

Also, making this admission allows you to save face if you do end up being wrong. After all, you can’t be expected to have everything correct, right?

Ask Yourself Some Questions

In any conflict, it’s important to think before you react. If someone puts forth an idea or assertion that you simply don’t agree with, don’t just jump right in and start arguing your position.

Yes, I know you want to show your brilliance when you prove your opponent wrong. It’s a natural desire. But it’s not productive. It’s best to take a step back and consider your reaction first.

In his book “How To Win Friends And Influence People,” Dale Carnegie outlines some questions we should ask ourselves whenever we are in a disagreement with another person.

These are questions you should ask yourself before you respond to any disagreement. They will help you react in a way that is productive.

Obviously, it may take some time to master this skill.

As in the previous section, it may be a good idea to take some time to think about what the other person is saying. This is also something that Carnegie recommends in his book.

If you’re able to do this, by all means, do it. It will give you time to make sure your reaction is one that is conducive to finding a solution to the problem.

Ask Them Some Questions

If you want the other person to see the merit in your argument, you have to get into their heads first. Don’t just assume that you know exactly what your opponent’s argument is and why they are espousing this argument.

Clarify any points that you don’t quite understand. The more you know about the other person’s thought process, the better you will be able to work with them in resolving the conflict.

Here are the things you need to find out:

The key here is to make sure that you’re not asking questions with the intent to crush their argument. You must truly desire to understand where they are coming from, and why.

Not only will this help you handle disagreements at work and effectively resolve the conflict, it shows the other person that you are not there to attack their ideas. You just want to understand them.

When it comes to disagreements, many people make the mistake of sacrificing the long-term relationship for a small, short-term win. Not only is this a rookie mistake, it can cost you in the long run. Especially if you’re dealing with a customer.

You need to be very careful.

When dealing with conflict, you need to assess whether or not this battle is even worth winning. In some cases, it may be more effective to concede the argument in order to maintain a profitable relationship with the other person. It can be the only way to really get what you want.

Sometimes, dealing with conflict can be like playing a game of chess. Frequently, there are situations where you have to sacrifice a pawn in order to put yourself in a better position to win the overall match.

If it helps your cause in the long run, let them win the smaller argument. Not only will you save time, you will still be in a good position to accomplish your goals.

Tying It All Together

I’ve often been in a position where I’ve had to resolve conflict with angry customers. There was one particular scenario that played out fairly often.

The customer called in because they were dissatisfied with a service they had and wanted to cancel it. There were many situations where the customer was yelling and being particularly aggressive. In situations like these, it’s easy to become defensive and angry.

Instead, I had to practice tip #1. I curbed my anger and I shut my mouth. Instead of arguing back, I allowed them to vent. Sometimes they would go on and on and on.

When they finally finished ranting, I made sure I clarified anything I didn’t understand. I made sure I knew exactly what the problem was. This made the customer feel like their point of view was important and valuable.

While the customer was talking, I was looking for ways to find a solution that worked for both the customer and the company. This wasn’t always possible with each customer, but it did work with many others.

On many of those calls, I found myself admitting that there were areas where we were wrong and I committed to doing whatever I could to solving the problem. Instead of showing the customer that they were mistaken, I got them to lower their guard and listen to what I had to say.

In many situations, I was able to get them to keep the service and in some cases, they even upgraded. It shows that taking the time to focus on solutions rather than winning can have great results. If you want to be great at resolving conflict, turn the conflict into a collaboration.