This Entrepreneur Uses Periscope As A Growth Hack

Live streaming enables you to broadcast anything through your smartphone or tablet.

Apps like Periscope, Meerkat and Blab enable businesses and solopreneurs to make a convenient, “on the fly” mobile broadcasting station, streaming real-time video and audio to any viewers who join their broadcasts.

If you’re struggling with engagement or awareness, you might want to consider a Periscope or Meerkat strategy to help those goals, including finding the right communities who’ll grow to like you and promote you.

In August 2015, Periscope announced that over 10 million people had downloaded the app.

Mario Armstrong is an Emmy Award–winning talk show host and a regular contributor on NBC’s TODAY show, CNN, and NPR. He is the author of the monthly “Learn It” column in Men’s Fitness magazine. He’s also served as chief technology advocate for the city of Baltimore, IT director for the state of Maryland Tourism Department, and was one of only six people to represent the U.S. at the Technology Delegation in Seoul, South Korea.

Recently, he spoke with Small Business Trends about how live streaming is key to him. 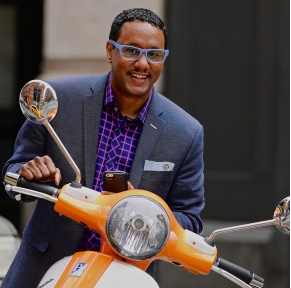 Small Business Trends: Can you tell us about your business and how live streaming helps?

Mario Armstrong: Mario Armstrong Media is a technology-driven media company that produces uplifting, self-help content that motivates people to take action and helps them identify technologies they should use to accelerate their personal and professional growth.

It’s also low risk because we can test any content slated for a major launch on Periscope first. We also use it to cross-promote our other channels’ content, like the #NeverSettleClub.

Mario Armstrong: We’ve seen more people join the #NeverSettleClub because of Periscope; more so than Facebook ads or anything else. It’s a growth hack because video lets you speak your truth. People see the authenticity immediately. 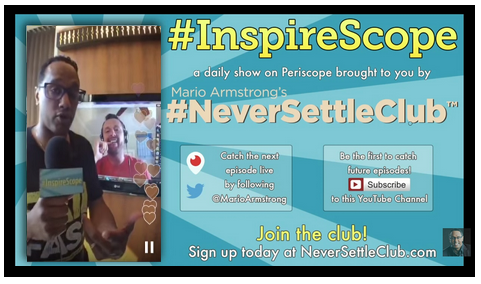 This goes much further than words and pictures. We’re also creating a show on Periscope as a forum to discuss what we covered in our last podcast. Our true podcast listeners will know to hop into the scope and engage. It gives them a voice and reminds the community that we have a podcast. Those broadcasts extend the impact of our last podcast episode. 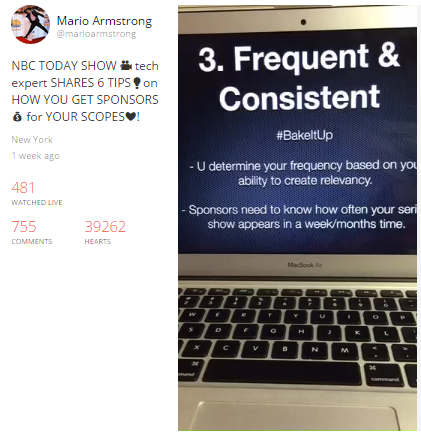 Small Business Trends: Can you tell us about a broadcast you’ll never forget and why?

Mario Armstrong: I remember sitting outside Starbucks and Periscoping about how to acquire sponsors for your scopes. My plan was to provide five quick tips in half an hour, but it took on a life of its own. It became an impromptu seminar of me engaging with over 1,000 users for nearly 2 hours.

Needing to think on my feet, I was able to show my expertise. Monetization became the focus of the chat, and important questions were answered. This wasn’t planned! Strangers on the street started listening in, asking about what I was doing, too.

Small Business Trends: Who are some people you enjoy interacting with on Periscope?

Mario Armstrong: Too many to name! But I love scopes from Ryan Bell. He’s lifting the Periscope community to be the best it can be. He’s also producing the summit named New York Scope Week with Cathy Hackl.

And, of course, the creator of Periscope, Kayvon Beykpour, shares engaging updates about Periscope itself. His broadcasts produce valuable Q&A from the community in real-time.