Could Microsoft Edge Be Your New Web Browser? 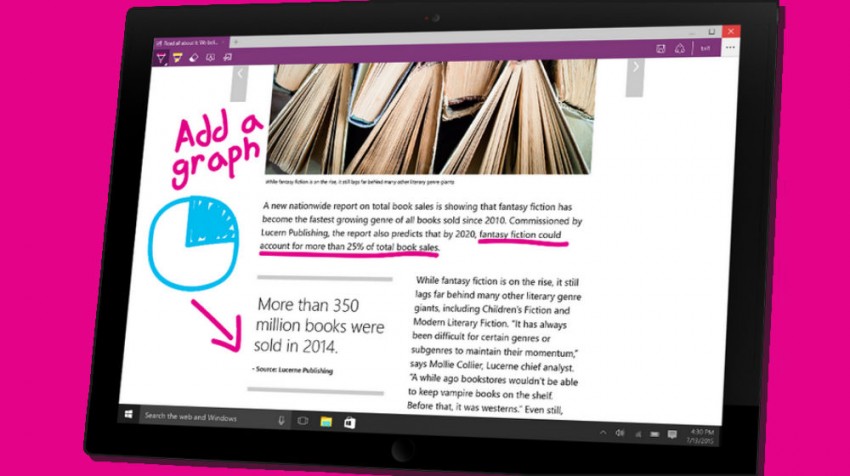 To date, one of the biggest standouts in Windows 10 is the new Microsoft Edge browser.

After 20 years, many innovations and a long period of stagnation, it took a lot to overhaul this browser.

“We’ve fixed over 3,000 interoperability issues (some dating back to code written in the 90s) on top of the over 40 new Web standards we’re working on. For example, longstanding inner HTML issues are now fixed.”

So, is the new Microsoft Edge browser really all that much different than its predecessor? Let’s take a look at some of the early returns on the new Edge browser.

Of course, one of the best places to look for instant reactions is on Twitter. And there, — surprisingly — you’ll find a lot of praise for one of the more hyped additions to the new Windows 10 operating system.

Persevering with the #EdgeBrowser in Windows 10. Not too bad at all. Quietly impressed.

In fact, Twitter users appear to be pleased overall with Edge. Some have even considered switching from another browser, like Chrome, to Microsoft’s new offering. Not everyone who tried out Edge for the first time walked away impressed, however. You get the feeling that some just walked away. But you get the feeling they might come back soon.

Upgraded to #windows10 and the calculator program is broken. Good thing I can do long hand math in the #edgebrowser! pic.twitter.com/GaIJaj8CIf — Nathan Lampe (@NathanLampe) August 4, 2015

Really, Twitter users have reserved much harsher criticisms for software products in the past. In fact, you’d be hard-pressed to find those harsh critiques of Edge. It’s mostly praise … so far.

Here are some of the notable features on the new Microsoft Edge browser that separate it from Internet Explorer and what could make it your next Web browser:

The one praise Edge continues to get is how much faster it is than IE, especially when stacked up against Google Chrome. On the official Windows blog, Microsoft reports some exciting results, claiming:

The Edge team has been continuing to optimize performance since first adding the new browser to Windows 10. In this build, Microsoft Edge is even better and is beating Chrome and Safari on their own JavaScript benchmarks:

Microsoft claims this was accomplished with a new rendering engine that eliminated or trimmed the vast majority of the legacy technologies and legacy behaviors that were holding back IE.

In a mobile environment speed is at a premium. And as small businesses deploy their employees with mobile devices, accessing the resources they need is also critical. Those resources could include cloud services, hosted solutions and vendors, to name a few.

The speed also comes without sacrificing battery life, which has been an issue for Chrome users. Although there hasn’t been a real lab test to date, some sites have reported they have seen improved battery life compared to Chrome.

Cortana is Microsoft’s virtual personal assistant and, until now, it was only available on the Windows Phone platform.

By making it available on Windows 10, Microsoft seamlessly integrates Cortana with the new OS. And nowhere is this integration more useful than with Edge.

When Cortana is used with Bing, it becomes a very useful application for finding additional information on subjects you’re searching.

Whether it is a restaurant or an important vendor in town, the virtual assistant shows you maps, directions, reviews, phone numbers and other business info about what you are searching. With access to weather information, Cortana even tells you if an umbrella is recommended to get there.

As Microsoft increases its database of local information, it can be a great way for small businesses to integrate their CRM solution with Windows 10, Edge and Cortana. They can get valuable data on how their customers are looking at their site and make informed decisions.

This is one of the features that has been getting the most attention, and rightfully so. When all the bugs are worked out, it will increase the efficiency of anyone that is online. If your device has a touchscreen, you can now mark, annotate, draw or put anything on the page.

You can then add it to your favorites or reading list, send it to your colleagues or share it socially. Businesses can use this feature to highlight innovative products, services and features they see on websites and quickly make a note of it.

Click the Reading View icon on a website, and the page reloads hiding almost all of the content aside from the article and images. You can also create a reading list which lets you add content so you can read it at a later time even if there isn’t a connection.

The new Microsoft Edge browser will not support tools built for IE11 because they can be a security risk and exhibit slow performance. Tools not supported include Microsoft’s ActiveX, Browsers Helper Objects (BHOS), VBScript and others. However, Edge will support JavaScript-based extensions.

Microsoft says extension support will not come with the initial release of Edge, but it will be available by the end of the year. At least, that is as specific as the company has been thus far.

With so much interest regarding Edge, app developers are eager to add their extensions, including WhatsApp.

Edge is a definite improvement over IE, but for diehard Chrome and Firefox users, it is going to take more to make them jump ship. The changes are incremental, and as Microsoft continues to work out all the bugs, more extensions, apps and features will be part of this browser.

Small businesses that need apps to start working out of the box will have to be a little patient. But all signs point to a bright future for the new Microsoft Edge browser.

Michael Guta is the Assistant Editor at Small Business Trends and currently manages its East African editorial team. Michael brings with him many years of content experience in the digital ecosystem covering a wide range of industries. He holds a B.S. in Information Communication Technology, with an emphasis in Technology Management.
49 Reactions
Subscribe
Follow @smallbiztrends
RSS LinkedIn Pinterest iTunes