This Entrepreneur will Send Your Message — Via Potato? 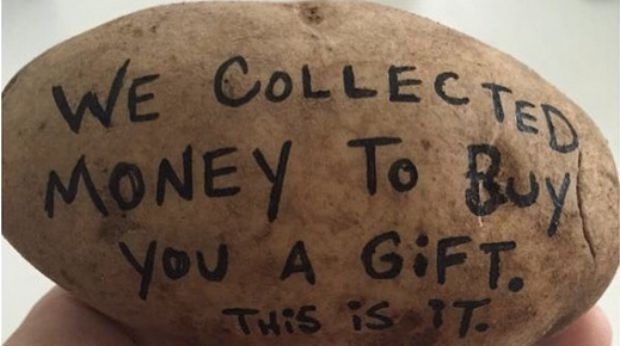 There are so many different ways to communicate short messages with people these days: texting, Twitter, Snapchat, email. And now you can add another method to that list — mailing a potato. Yes, thanks to Alex Craig, an entrepreneur in Texas, you can now mail potatoes to your close friends (or enemies) with anonymous messages written on them.

Sound like a dumb idea? You’re not alone in thinking that. Craig has faced a fair amount of doubt and laughter during his short entrepreneurial journey. In fact, even those closest to him discouraged him from even starting his venture, Potato Parcel. He explained to WFAA about when he first came up with the idea and told his girlfriend:

“She said, ‘You will not sell a single potato. This is the stupidest idea I’ve ever heard.’ On our second day that we were live, and we started promoting it on Reddit, and we got $2,000 in orders, and I just knew this was it.”

Now, Potato Parcel brings in $10,000 a month in revenue. And since the company’s costs mainly consist of potatoes and postage, that’s a recipe for major success.

It’s a truly unique business idea, and not one that many people would seriously consider, or even think of. But its ridiculous nature is part of its appeal for a lot of customers. Plenty of people pay big money for novelty items or experiences that might not have the most practical value. Mailing a message written on a potato certainly qualifies as such.

Some looking at the idea now might wish they’d thought of Potato Parcel first. However, Craig points out that any entrepreneur faces the same challenges regardless of the venture. He told WFAA:

“I would say the two things that hold everyone back in life [are] fear and doubt. The fear of failure and the fear of wasting your time, and the doubt that you can actually achieve something big on a huge scale.”

He decided not to listen to the doubts about his business idea and just went for it. And now he brings in $10,000 a month by mailing potatoes. So if you have a business idea you’ve been sitting on for fear of ridicule or failure, you might want to reconsider.