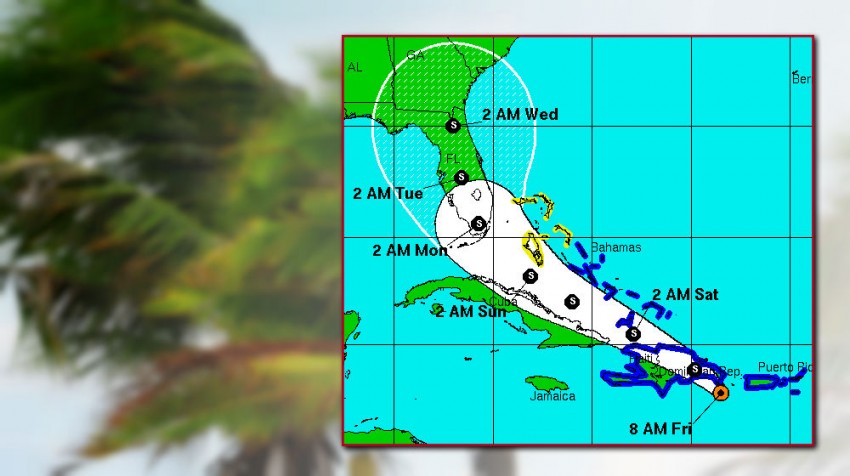 It’s been a relatively tame tropical storm season in the Atlantic Ocean but Tropical Storm Erika is making a late-August run at the Southeast U.S.

Some tracks have the storm on a path to collide with the southern tip of Florida — and potentially move into the Gulf of Mexico — by early next week. That potential has prompted Florida’s Small Business Development Center to issue a warning to companies in the state: Get prepared.

The U.S. Small Business Administration estimates that 25 percent of small businesses never reopen in the wake of a natural disaster, like a hurricane or tropical storm.

Some suggest that rate could be even higher, though it all likely hinges on the severity level of the storm.

In preparation for such extreme weather emergencies, the federal agency recommends businesses:

In a statement this week, the Florida SBDC says now is the time, ahead of the storm, for small businesses to get together a Business Continuity, Emergency Preparedness, and Disaster Recovery Plan. The agency is offering some help to small businesses in the lead up to the storm … and a stark reminder of what could happen if businesses forgo being ready in the case of a natural disaster.

Michael W. Myhre, CEO and Network State Director for the Florida SBDC, said in a statement this week:

“As we remember the 10th anniversary of a hurricane season that devastated Florida, we are reminded of what can happen to a community when its businesses are destroyed and never recover.

“Though it is too early to determine if Tropical Storm Erika will maintain its current course, and what intensity it will become, businesses should continue to monitor developments and have a disaster plan in place.” 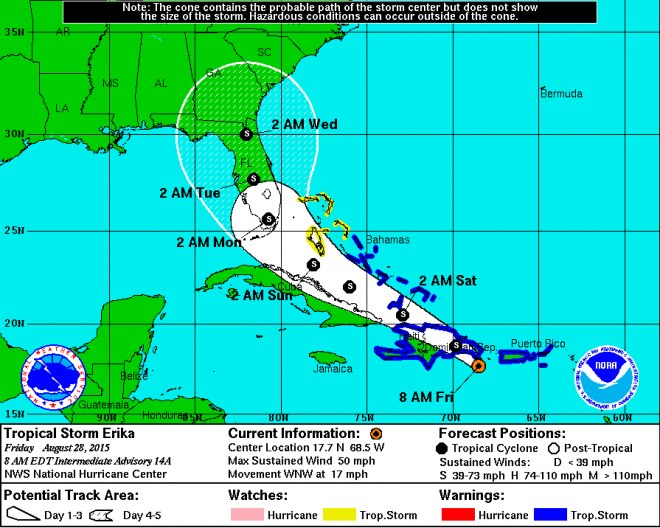 As of Friday afternoon, Erika was centered on Hispaniola as a tropical storm (sustained winds between 39-73 mph). Through the weekend, the storm will cruise through the Caribbean Sea, only grazing eastern Cuba’s coastline before bearing down on the southern portion of Florida.

The storm’s path could have it impacting the city of Miami as a tropical storm, not a hurricane.

Even with steady winds at that speed, it’s enough to cause property damage, knock out electricity, and cause serious injuries. That’s especially true if preparations are not taken ahead of time. Also, consider that the forecast landfall in the U.S. isn’t until Monday morning so the forecast could change and the storm could strengthen or weaken.

Though it currently appears unlikely that Florida or anywhere else in the South will see a major impact from the storm, even one day lost carries a cost.

Florida’s SBDC is offering, at no cost, to connect small businesses with experts in the state to help them prepare a business continuity plan. These are plans that help a business stay running in the event of a natural disaster.

And planning at this point could take as little as five minutes, according to Florida’s Division of Emergency Management. In a statement issued Aug. 27, FDEM director Bryan W. Koon said:

“A visit to FLGetAPlan.com takes just five minutes, and can help you create a plan to better prepare your family and keep them safe. The website provides a quick and simple option for those looking to build a basic emergency plan for their family or business.”

Even if a small business is not in the expected path of Tropical Storm Erika, it’s wise to prepare in the event of any natural disaster. Hurricanes and major snowstorms allow some time to prepare but others like earthquakes and tornadoes give, at most, a few minutes.

You can sign up to see past Webinars and other resources on business preparedness on PrepareMyBusiness.org. Or get more information on local disaster preparedness at FloridaDisater.org, a website operated by the Florida Division of Emergency Management.