What is Periscope and How Do I Use It? 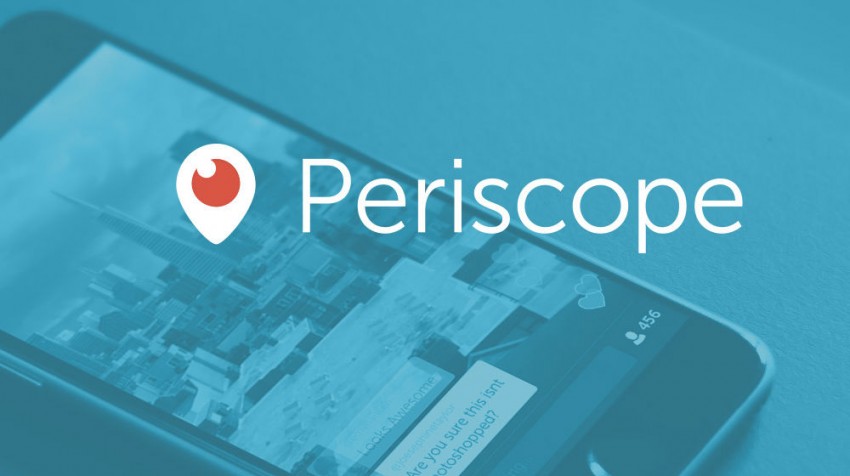 Periscope, the live streaming video mobile app purchased by Twitter in February of 2015, has been the talk of the town since its official launch on March 26, 2015.

While Periscope is hotter than a Phoenix sidewalk in July, it can be a bit intimidating to folks new to the platform. After all, you’re going to be talking in front of a live audience and you want to at least look like you know what you’re doing.

That’s why this guide was created. Once you work your way through our guide, you should be ready not only to hold your first broadcast, but also to make it a success.

Simply put, Periscope enables you to “go live” via your mobile device anytime and anywhere. The app enables you to become your own “on the go” broadcasting station, streaming video and audio to any viewers who join your broadcast.

Periscope is an app that truly takes advantage of its mobile platform incorporating notifications and location as well as social sharing (on Twitter of course), live discussions and feedback. A Periscope broadcast in full swing is a truly interactive event: 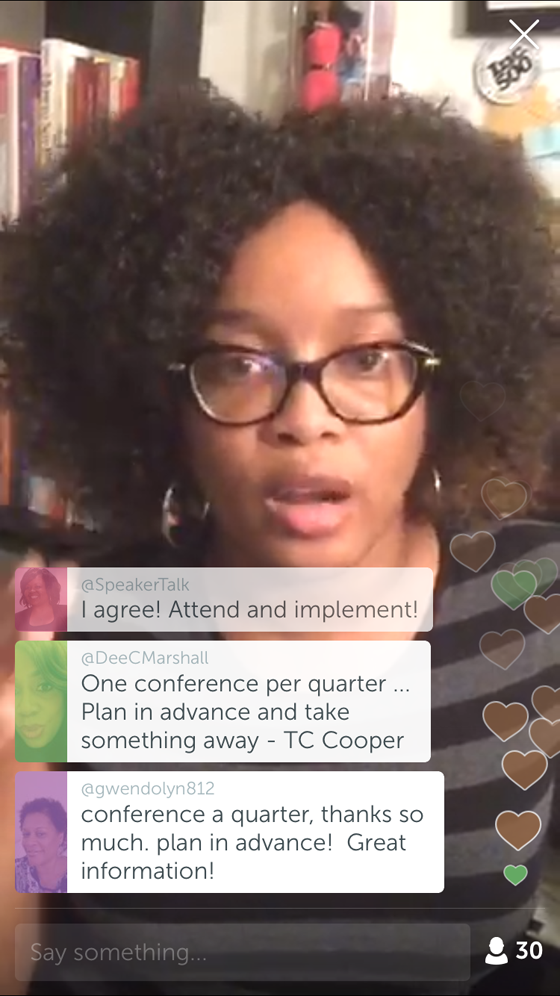 Once a broadcast is over, others can watch a replay, and even provide feedback, within Periscope for up to 24 hours. After that, the broadcast is removed from the app.

Never fear however, each of your broadcasts can be saved to your mobile device and, once you’ve got it there, it can be published and shared online just like any other video.

There are many ways you can use Periscope for business from insider videos to live Q&A sessions and beyond. Periscope is also a great tool to use to show off your skills, especially if you’re a speaker.

Professional speaker Marquesa Pettway (CSP, DTM) teaches entrepreneurs how to use speaking to grow their business and is a big fan of Periscope.

“I love periscope,” Pettway says. “I’ve got a few broadcasts under my belt and have found that it’s your chance to share your expertise, your love of life, your neighborhood or just your perspective with people that already know about you while also attracting new people that turn into followers and maybe even clients. Just get on there and share your heart and you’ll get hearts in return.”

How Do I Use Periscope?

This section walks you through using Periscope by focusing on five areas:

The first step in using Periscope is to download it to your iOS or Android device. The first time you launch the app, you’ll be asked to sign in: 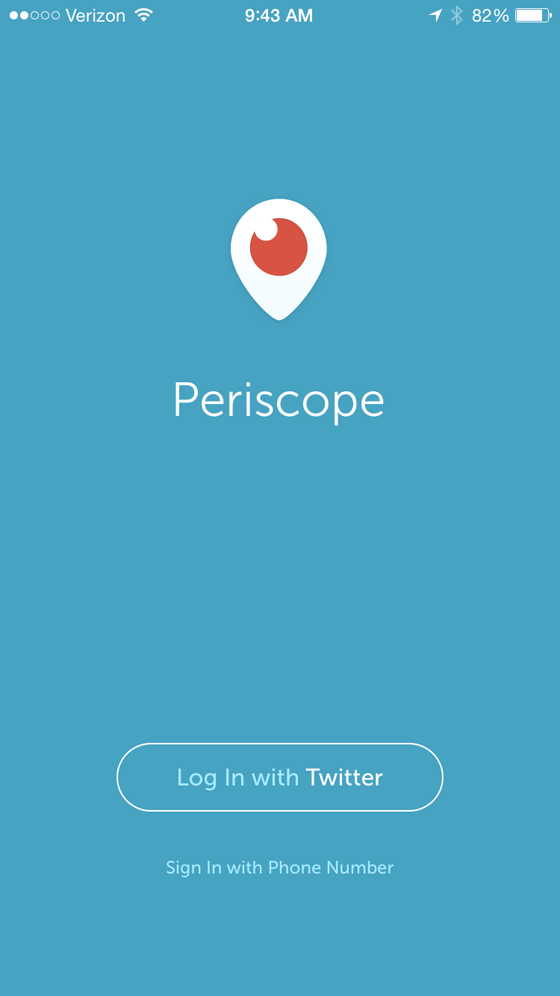 If you have more than one Twitter handle, you can add the additional ones using the “Add Account” function under the Twitter settings on your device: 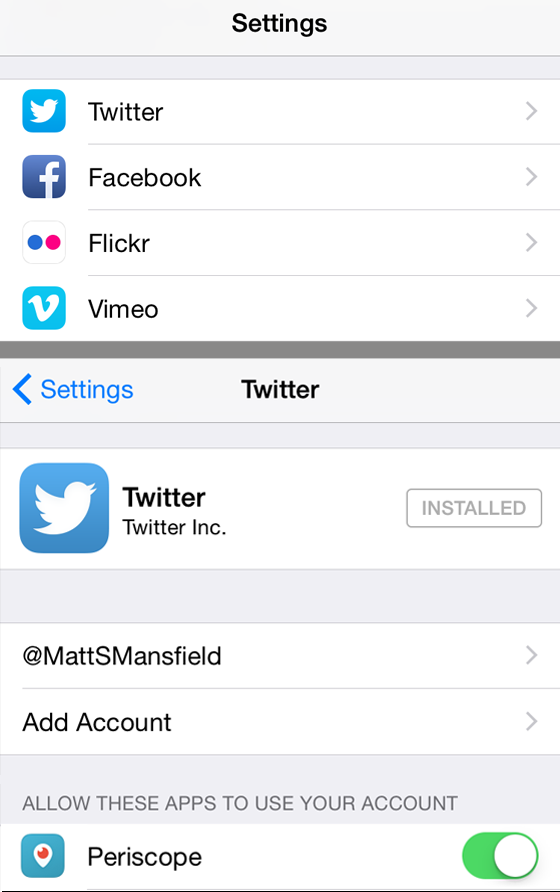 There are four primary tabs in the Periscope app. The first tab displays two lists: 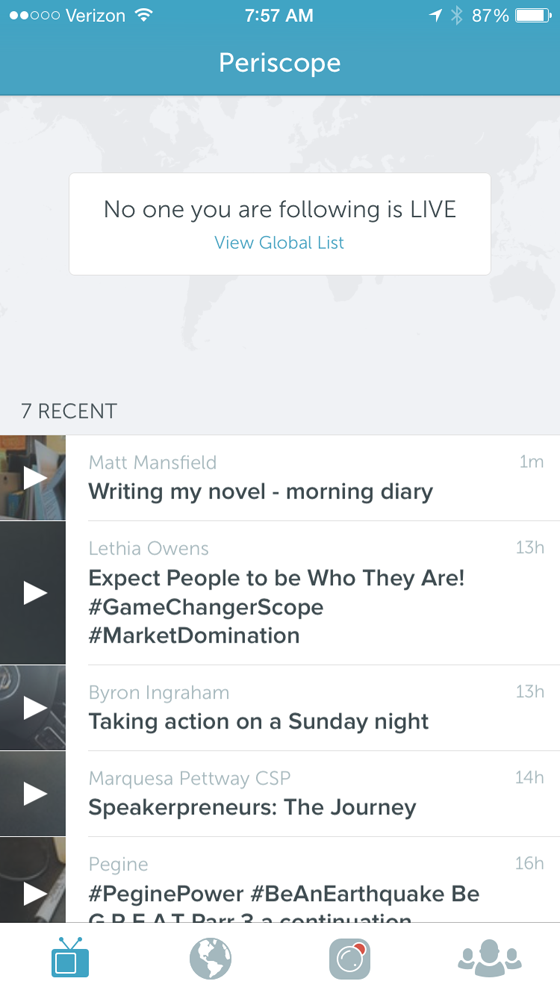 The second tab in the app has two views, both of which show a global list of live public broadcasts that you can join. You can flip between both the list and map views by using the selector at the top of the screen: 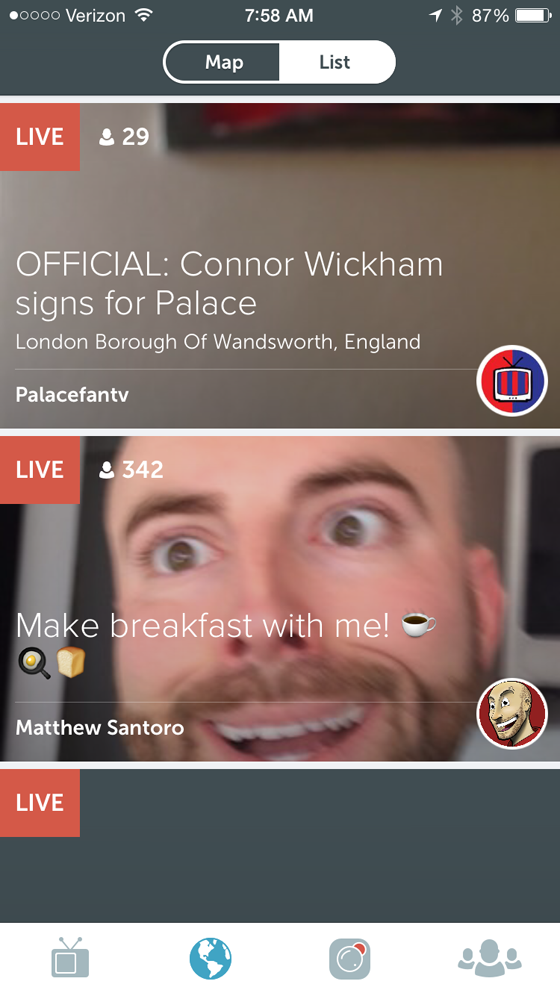 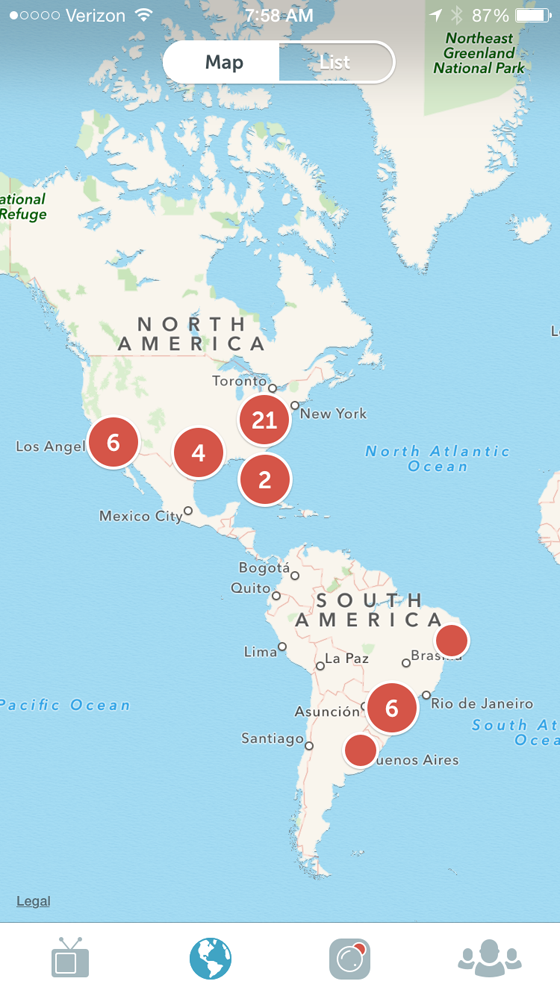 The third tab is your broadcast booth: 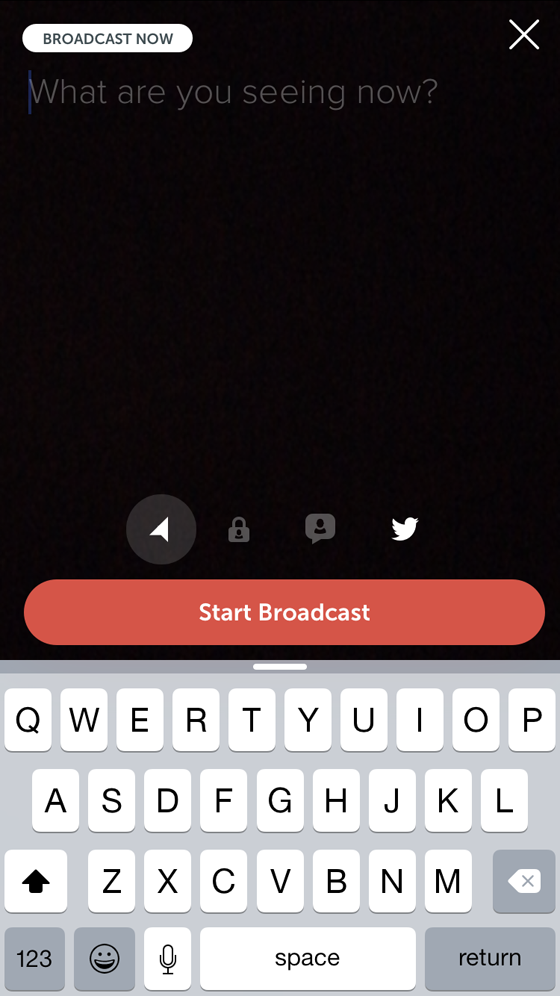 The final tab is where you can look up folks to follow. Note that the number of followers displayed refers to how many Periscope followers a person has, not how many Twitter followers. This is also where you access your profile and other settings: 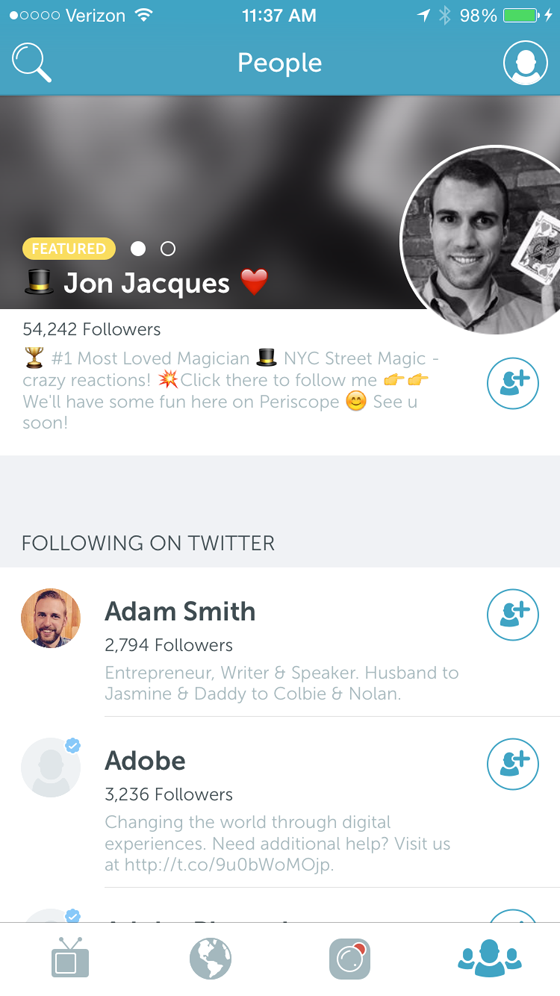 As you can see in the screenshot above, there’s a little blank headshot in the top right — touch that to access your Periscope profile as well as your settings:

In terms of functionality and information, this screen is robust: 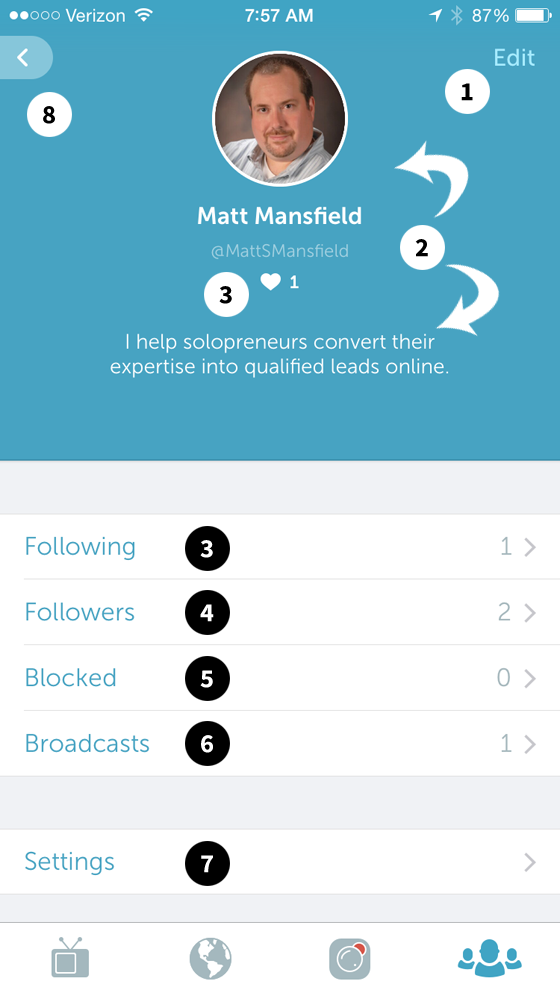 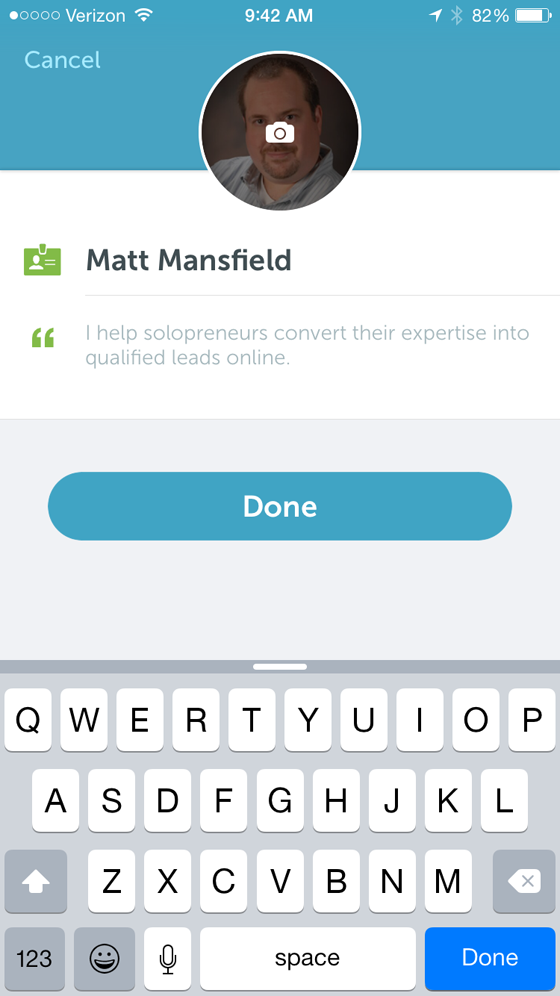 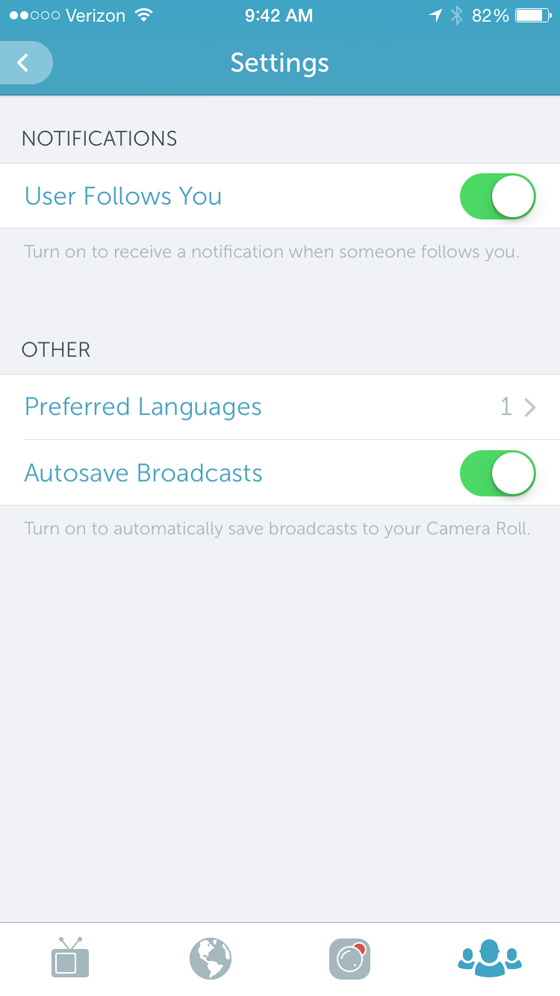 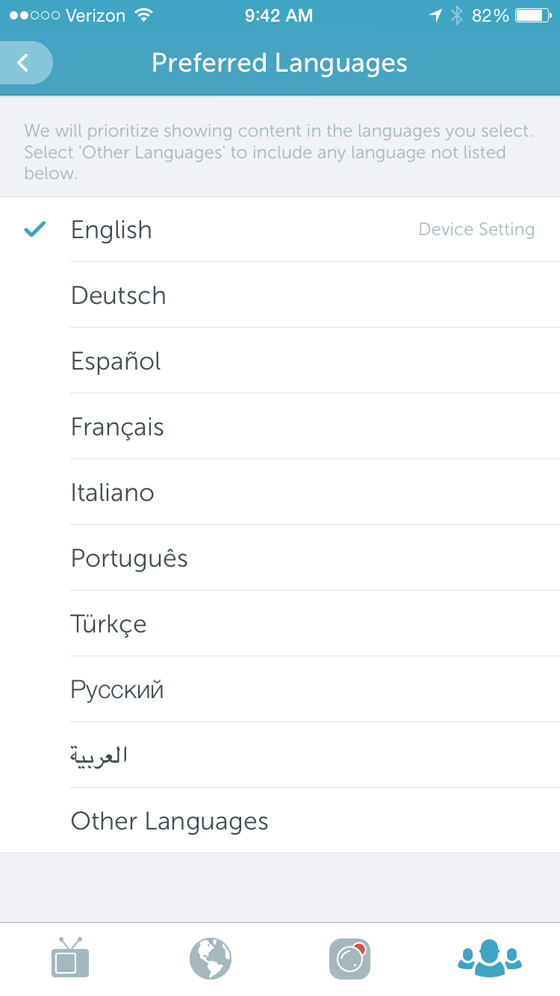 Under the settings slider, there are some other useful features including a way to share Periscope, find help, send feedback, view legal information and finally, log out of the app.

To watch a live broadcast on Periscope, head on over to either the list or map version of the global broadcast tab and touch an existing event that interests you.

If your notifications are turned on, you’ll also learn about a live broadcast when:

In the example below, you’ll see how to watch a broadcast replay that, except for interaction via comments, is exactly the same as watching a live broadcast.

First, select the broadcast by touching it on your watch screen’s replay list (in this case, you’ll be watching, “Speakerprenuers: The Journey”): 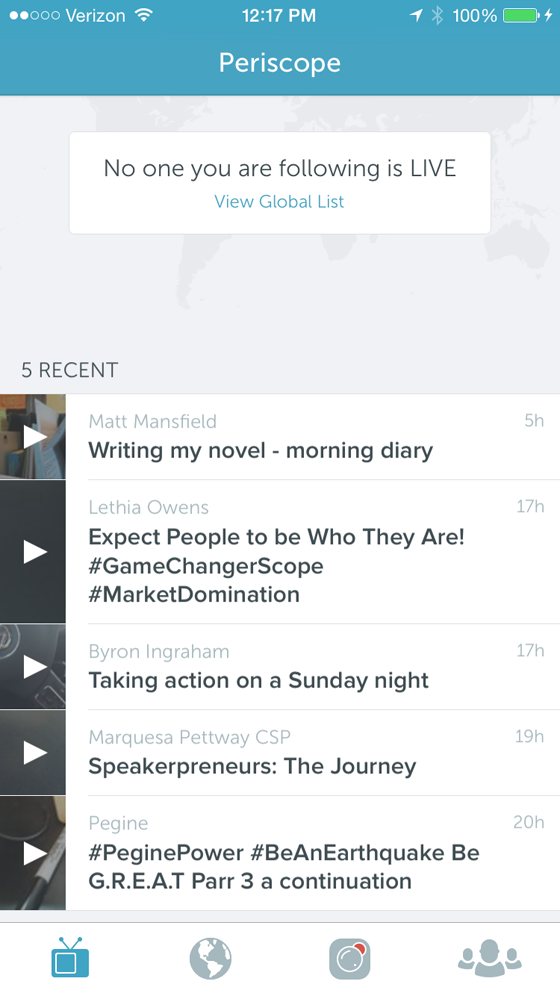 The broadcast starts at once. As you can see below, there are a few moving parts here: 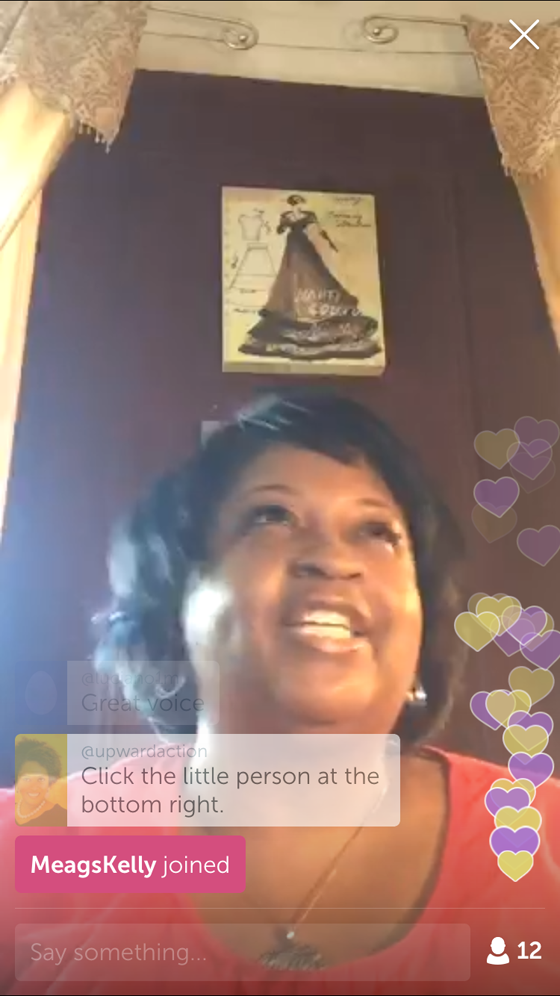 When you click on the little person at the bottom right of the broadcast screen, you’ll be taken to the following screen: 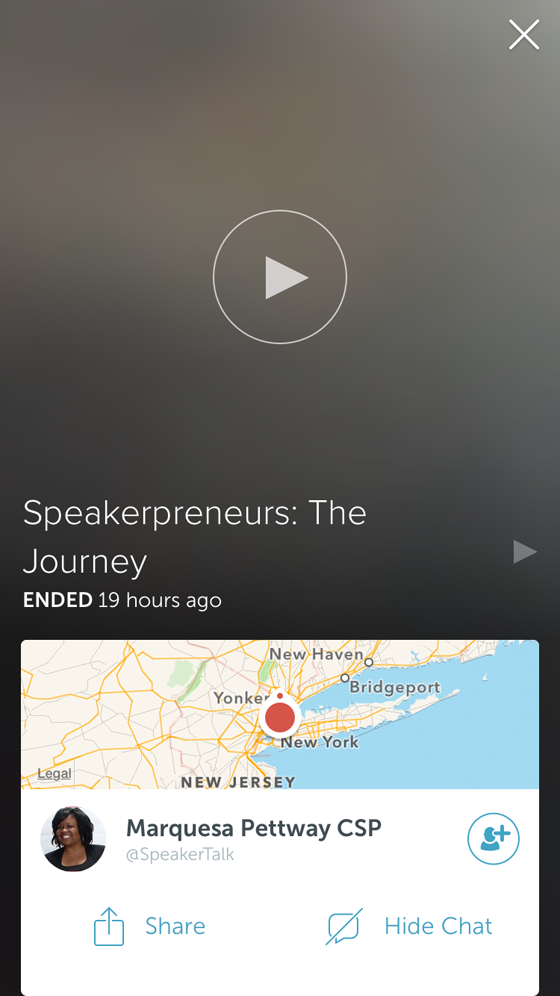 Since this is a replay, there’s no broadcast showing currently in the top part of the screen. Here are some things you can do however:

Scrolling down on this page enables you to see who watched this broadcast live and during a replay as well as the viewers who sent hearts and how many hearts they sent. Finally, you can report a broadcast if you found it offensive or inappropriate in some way.

Be aware that you can watch a broadcast on your Mac or PC. All you need to do is click on the link when someone shares it. At this time however, you cannot comment or give hearts when you’re watching this way.

One last note on watching a broadcast: if there are too many people in a broadcast, only those who arrived early can make comments. If you join a popular broadcast, you may be shown this screen: 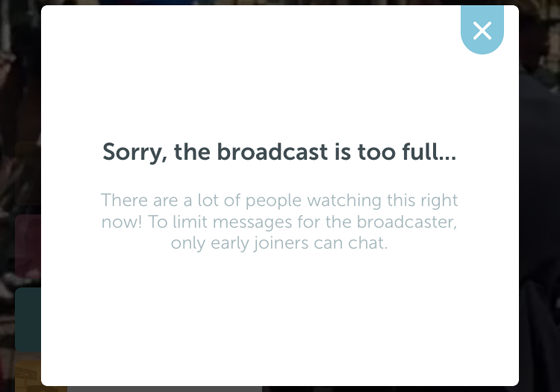 Consider yourself warned — if you want to chat during a popular broadcast, join ASAP.

Finally, we come to the heart of Periscope, sending your own live broadcasts.

When you first visit the broadcast screen, you’ll see the following popup: 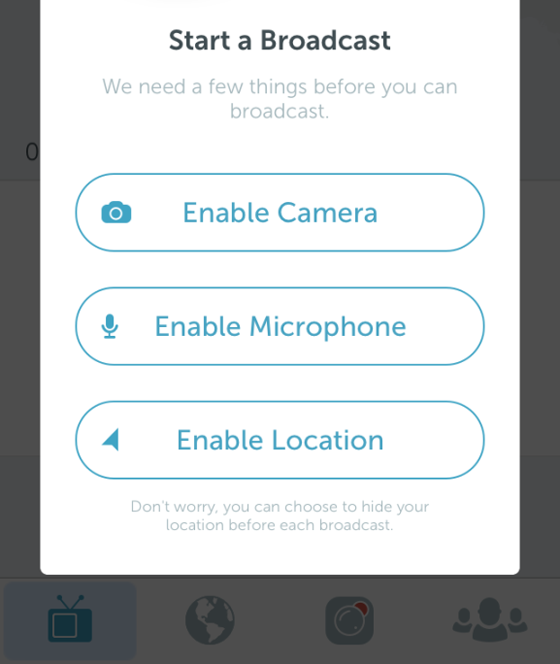 First, enable all three options as the first two are necessary for video and audio and the third can be shut off for individual broadcasts.

Next you’ll be taken to the broadcast set up screen: 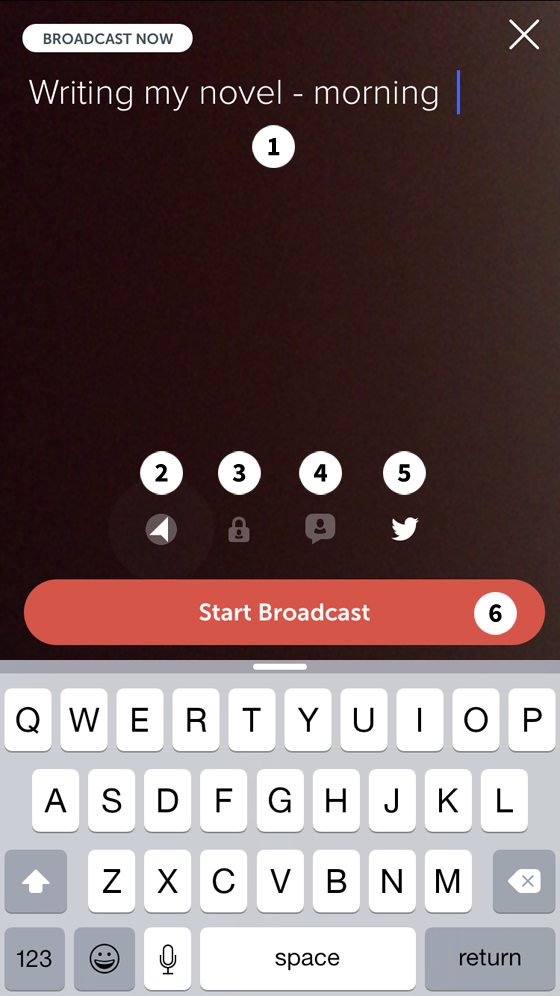 Look through this screen one step at a time:

From there, it’s just like watching a broadcast except you’re the one on the screen!

One important tip: if you need to change which camera your mobile device is using (if you’ve enabled comments, you really want to be watching the screen during a broadcast), double tap the screen to switch.

After the broadcast, you’ll be able to see some metrics: 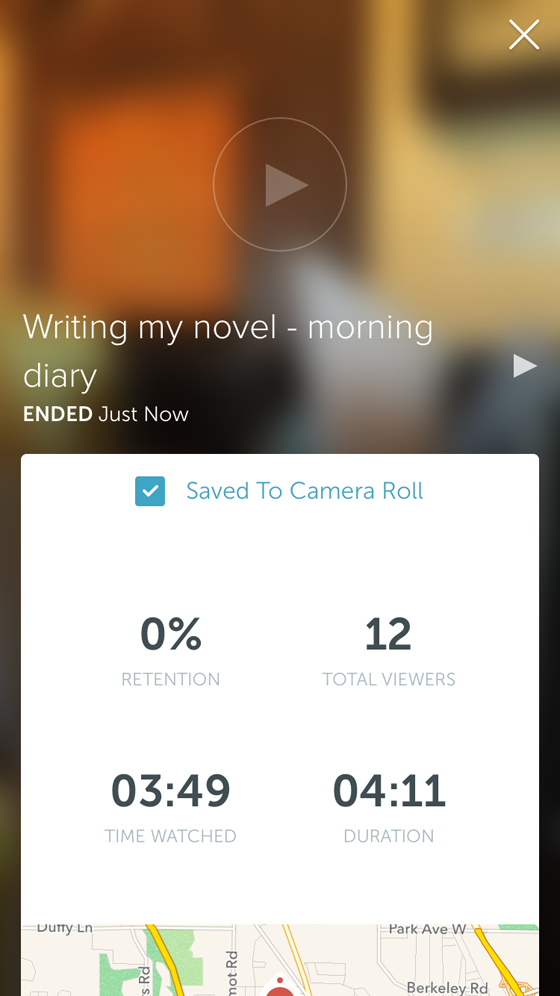 As you can see, the broadcast has been sent to your camera roll and that’s where you can grab it to publish or share it online. One note, the video above does not show any of the comments, joins or hearts — they currently seem to be shown only when watching a broadcast live or as a replay within the Periscope app.

From this point on, and for 24 hours, your followers will be able to share and watch a replay of your broadcast where they can continue to give you hearts.

Periscope is hot and bound to get hotter, especially given Twitter’s popularity with celebrities.

While it’s almost impossible to cover every nook and cranny of the app, this guide is a great place to start. So don’t wait. Get in there and start using Periscope. You’ll feel like a pro in no time.

Matt Mansfield is the Tech Editor and SEO Specialist at Small Business Trends where he is responsible for directing and writing many of the site’s product reviews, technology how-to’s, and lists of small business resources as well as increasing the reach of our content.
46 Reactions
Leave a Reply Cancel reply
Subscribe
Follow @smallbiztrends
RSS LinkedIn Pinterest iTunes