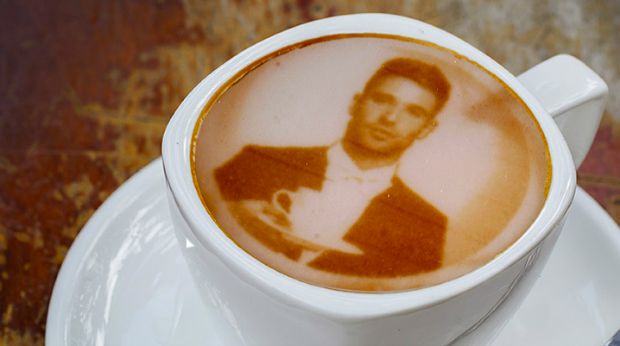 Seen in Instagram posts the world over, latte art has become one of the most photographed subjects of the past few years.

But if you’re a fan of those simple heart shapes or letters that your local barista specializes in, then you’re sure to be amazed by a new machine making its way to coffee shops and lounges later this year.

The Ripple Maker is a creation of Tel-Aviv-based company Steam CC. The machine uses 3D printing and inkjet technology to print essentially any image or message onto the top of your favorite latte.

The 3D latte art can consist of simple hearts or text, or can be as complex as a portrait or famous work of art. Baristas can select any photo saved to their library of images and create it in coffee form just 10 seconds later.

There’s even a feature that allows customers to upload their own images to the company’s mobile app and have them sent straight to the machine.

Aside from the artistic value of such a device, the Ripple Maker also shows tremendous potential as a marketing tool. Sharon Tolpin Topper, head of marketing at Steam CC told Fast Company:

“What’s amazing about this medium is that because it’s so temporary, people will have to upload it.”

So, the 3D latte art images the machine prints are fairly likely to find their way to Instagram and similar social platforms. All that free publicity could be a huge boost not only for the Ripple Maker, but also for the companies that use it.

In fact, Steam CC has already formed a partnership with German airline Lufthansa, which will stock the machines in its first class lounges later this year. Lufthansa and similar companies could use the machines to gain visibility for their logos or more specific marketing messages. Or they could simply offer the machines as a cool perk for customers.

In addition, Steam CC thinks the device could even be great for independent artists and designers looking to showcase their work in different formats. By simply submitting images to the company’s library, they could see their work in latte form and potentially gain a lot of visibility.

Either way, it’s a concept that’s likely to awe a lot of customers, especially at first. And that awe could translate into a lot of free publicity for a variety of businesses.