Amazon Webstores Merchants May be Headed to Shopify 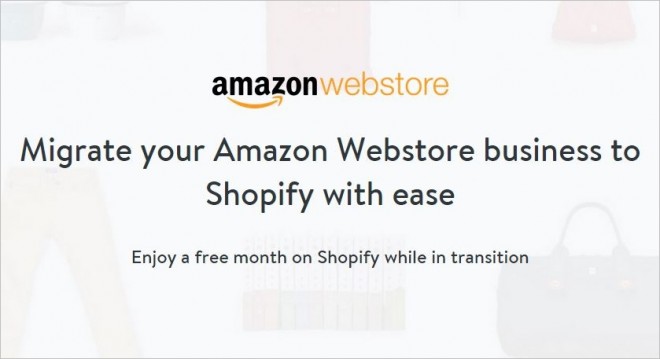 Come July 2016, Amazon’s Webstore will be no more.

With less than a year to go, the small and medium-sized businesses the platform was designed for will have to find another eCommerce solution.

The company first made the announcement it would be discontinuing the service in March 2015. Since that time, it has passed the mantle on to Shopify, making it the preferred Amazon Webstore migration partner.

“Shopify exemplifies the value of simplicity in an increasingly complex world of commerce services. We are excited to work together with Shopify to create best of class solutions that help merchants integrate Amazon offerings.”

When Webstore started almost six years ago, it was designed to give small business retailers a platform through which they could establish their online stores.

It was a one-stop shop that let owners create a mobile, tablet, and desktop website with merchant features. This included payment processing, shipping services, and inventory and order management.

Since that time, the competition has been doing much better than Amazon in this segment, Shopify being one of them. Although the company hasn’t disclosed the exact number of customers it has, estimates has the number at only several hundred companies; hardly enough to justify Amazon keeping it operational.

As Peter Sheldon, VP and principal analyst for ecCommerce at the research firm Forrester told ZDnet:

“Amazon has been bleeding customers from this platform.”

Sheldon also says there was a conflict of interest between the merchants and Amazon as they were, in essence, competing with its products.

This has been a boon for Shopify, as reported on Bloomberg. Its shares rose 23 percent to $35.55 at the market close in New York on Sept. 17. With similar deals already in place with Pinterest, Facebook, and Twitter, the addition of the Webstore customers will increase its dominance in this segment, albeit slightly more.

However, it is not the only player. As previously reported, you have many options. Supa Dupa, Lightcms, Magento Go, Storeenvy, Jimdo, Goodsie, and Volusion are just some of the companies she highlighted.

These companies, as well as the rest on the list, provide platforms that allow users quickly set up their store with all the features they need for online commerce.

As for Shopify, it has established a dedicated migration page for Webstore customers. Additionally, it is providing its merchants more integration with Amazon solutions, such as Login and Pay with Amazon, Fulfilment by Amazon, and Selling on Amazon.

As virtually all merchants today rely on Amazon for some portion of their online transaction, the collaboration with Shopify is a logical step.

“Many of Shopify’s existing 175,000+ merchants already use Amazon as a sales channel, and this will bridge the gap between our two companies, with just a few simple steps.”