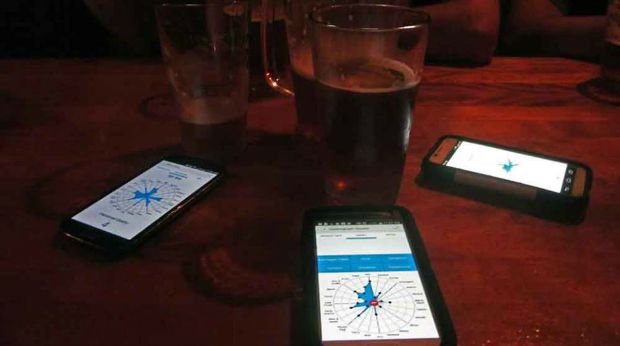 Big data has proven to be a useful tool for plenty of industries. And now it’s making its way into another type of business — one that’s not traditionally associated with high-tech tools — beer making.

Jason Cohen is a data scientist from State College, Pennsylvania. The entrepreneur, who is also a fan of microbreweries, was annoyed to find that some beer batches didn’t come out the way he wanted or expected them to. So, he created an app to help brewers create better beer batches.

Gastrograph claims to be able to find flaws in beer batches with just a handful of tastings. To accomplish this, Cohen had to identify some characteristics that could be measured and broken down into quantitative data that brewers could use.

He explained to VentureBeat:

“Everyone likes to believe they are an individual snowflake and everything tastes differently. When we model the artificial intelligence, we model a physiological responses to an underlying stimuli. The taste doesn’t change. But their perception of it does. So we identified 24 flavor attributes that are independent of age, sex, race, and past tasting experiences.”

Cohen used a graphics chip to help the app get results to brewers quickly. That’s an important feature for brewers who need to know whether or not their beer is ready to send out to vendors.

Since beer making is often considered more of an art than a science, Cohen claims that there’s quite a bit of variation in a lot of microbrewery batches. When customers expect one thing and receive something totally different, that’s not a good thing in any industry.

Craft beer and microbreweries have exploded in popularity over the last few years. And the unique flavors and small, carefully crafted batches are qualities that have certainly drawn in customers. Small breweries want to keep their customers and to do so, they need to be able to offer consistency in their batches and flavors.

If Gastrograph is able to help those brewers measure flavor results in each batch in a way that’s both fast and cost-effective, it might just be able to help the booming microbrewing industry attain that consistency that customers crave.