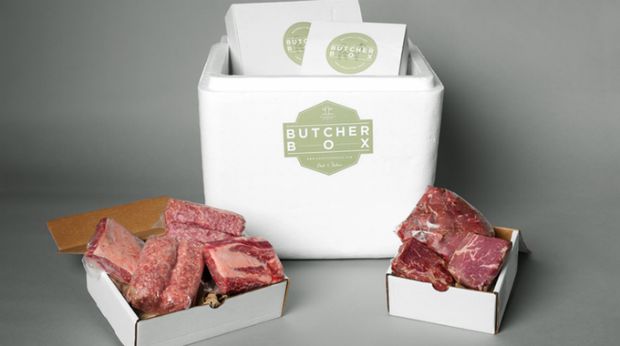 The entrepreneur was frustrated with the quality and price of purchasing small portions of meat from grocery stores. When a friend introduced him to the concept of purchasing shares of freshly butchered livestock, Salguero jumped at the opportunity.

One thing led to another and Salguero eventually found himself buying an entire steer’s worth of meat. While he had a freestanding freezer in which to store it, he knew that most of his friends wouldn’t be able to do the same.

“I basically split it up like a drug dealer and sold shares to my friends. They were ecstatic, and thought it was really good quality, but it was still almost impossible for everyone to store it all.”

But he thought that lots of other people would probably like the opportunity to buy fresh meat at reasonable prices, even if they didn’t have a freezer big enough to store an entire cow.

Salguero decided to start ButcherBox to solve that problem.

ButcherBox is a subscription-based meat delivery service that promises quality cuts of grass-fed beef, other meats, and recipes to help you prepare them. Currently on Kickstarter, the company is offering one-time kits for about $129. Or you can purchase a yearly subscription of meat delivery for $1,399.

Subscription boxes like ButcherBox are a growing trend, offering everything from makeup to music. Even if the trend eventually dies out, the concept behind ButcherBox could stand the test of time.

For those who eat meat, going to the store multiple times a week and buying low-quality cuts really doesn’t make the most sense. If you know you’re going to be buying meat regularly anyway, paying up front for a month’s worth of quality options might seem pretty appealing to a lot of customers.

So if the company can meet its crowdfunding goal, gain enough regular customers and keep them satisfied with the product, buying meet might never be the same.