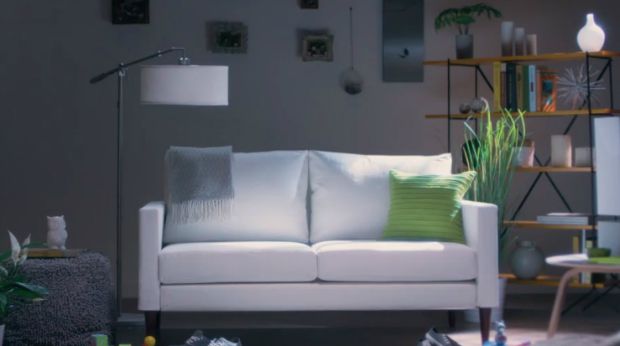 If you’ve ever experienced the headache of assembling your own furniture, particularly from low-budget stores like Ikea, then you understand the frustrations of Brad Sewell.

Sewell, a former Apple engineer, moved from California to Boston for business school a few years ago. And he had difficulty finding furniture that fit somewhere between IKEA’s inexpensive, do-it-yourself model and the high-end stores that weren’t exactly affordable. He explained to Entrepreneur:

“I had this taste in quality, but a budget that was like ‘graduated IKEA.’ There wasn’t much between your disposable furniture and the really high-end stuff.”

He knew that there had to be a way to make and ship furniture so that it was both high quality and easy to assemble. So, in 2012, he started his own furniture company, Campaign. He even left Harvard Business School to focus on the project.

The eCommerce site launched earlier this month, offering chairs, loveseats and sofas made from laser-cut steel tubing and organic cotton. It’s not a large enough line to rival the likes of IKEA just yet, but Sewell has big plans for the future. He wants to get into dining tables, bedroom sets and even outdoor furniture. And, he has plans to partner with other designers to release limited edition covers for the various furniture pieces.

He also has a goal of opening a storefront at his Emeryville, California headquarters. But in the meantime, he has some creative ideas for showcasing the products to those customers who might be too far away or can’t make it into the showroom. He said to Entrepreneur:

“Whether it’s your favorite coffee shop in Brooklyn or a hotel lobby in San Francisco, or a bar in downtown Los Angeles or a startup [company’s] lobby, we really want to curate list of great places to showcase a few pieces. So your buying experience would be visiting the website, seeing all the features, and then seeing a list of locations where you can try them out.”

While the business is still in its very early stages, Sewell’s idea does show some promise. Born out of his own desire for furniture that fits somewhere in the middle of the market, the company’s offerings are likely to fit the budgets of plenty of others who have experienced that same conundrum.

So if the company can both expand on its offerings and get the word out about them, there are likely plenty of consumers out there just waiting to pay a bit more for nicer furniture that won’t take hours of frustration to build.