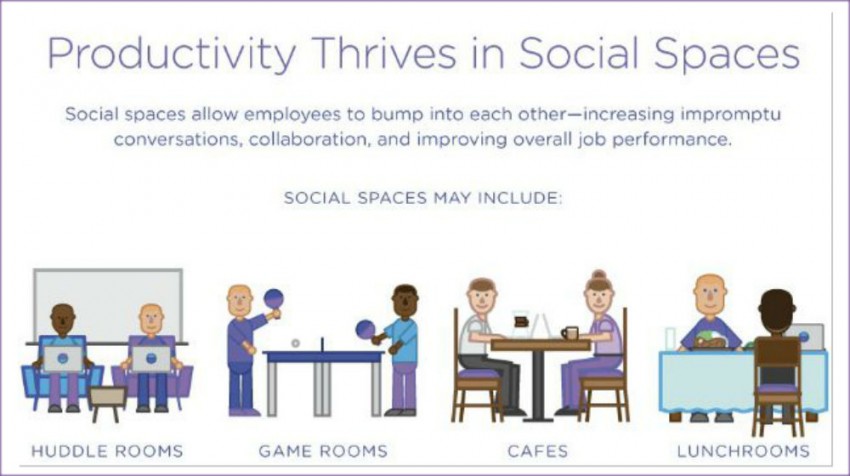 It may be time to rethink your office’s conference room, according to a new infographic created by visual communication agency Column Five and video conferencing provider Highfive.

A traditional conference room is often comprised of a large meeting table, maybe some presentation equipment, and not a whole lot else. But this concept doesn’t maximize productivity for most teams, especially now that so many workplaces are leaning toward more open concept workspaces.

The infographic shares some interesting statistics about the usage of traditional conference rooms.

For example, it states that only three to four chairs out of twelve are usually occupied at any given time, according to Herman Miller research. And limited technology causes smaller conference rooms to be used only 10 percent of the time.

But it also shares some ideas for changing the environment to one that is more likely to foster productivity, collaboration and creativity.

One of those ideas is to increase the social space in your office, so that employees have areas where they’re likely to bump into their coworkers or can even sit with them to have a quick meeting. Social spaces include things like game rooms, cafes and lunchrooms.

But making those changes doesn’t have to mean making huge, costly renovations.

The infographic also shares some small things that businesses can do to increase productivity in their offices.

For instance, keeping the temperature just under 72 degrees can increase productivity, along with natural light, plants, and the right color palette. According to the graphic, certain shades of green can improve efficiency and focus, while yellow triggers innovation and blue can have a calming effect.

Kimberley Kasper, CMO of Highfive, explained the thought behind creating the infographic. She said in an email conversation with Small Business Trends, “We decided to do this infographic because many don’t realize how important conference rooms are and haven’t given them the thought they should when designing.

“With more and more open workspaces, people are looking to use these rooms as a respite from the noise and are looking for environments where they can be the most productive.  This infographic provides insight into how to make these rooms into spaces that will foster productivity and engagement.”

Not all of these changes can be made overnight. But for businesses that may already be thinking about new collaborative spaces or ways to increase productivity in the workplace, the graphic provides some good starting points.

And while having a great conference space might not seem like something that can have that big of an impact on your bottom line, there is some research that would counter that point.

So if you haven’t already, it might be time to rethink the design of your office’s conference space.