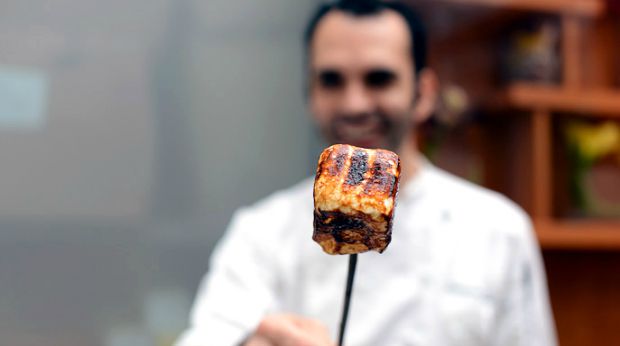 Despite its trendiness, kale isn’t something that a lot of people think tastes as good as sugary sweets like ice cream. But don’t tell that to Dominique Ansel. Fast Company recently challenged the famous pastry chef to create a dessert centered around the leafy green that people would actually enjoy eating. And he rose to the challenge.

The finished product was a kale lime sorbet. He used kale and lime juices, water, sugar and vodka. It’s something pretty different than what he’s used to making. Ansel told Fast Company:

“I have played a little bit with vegetables before. I’m not a huge fan of mixing too many vegetables when it comes to sweets, but I like adding a few notes. And just doing vegetable ice cream I think is interesting. It’s good to try.”

Though he’s not racing to give it a permanent spot on his restaurant’s menu, Ansel shared the kale sorbet, along with other frozen treats made with carrots and beets, with some of his customers. And they seemed to enjoy it.

This isn’t the first time that Ansel has created a new sort of dessert with some unconventional ingredients and/or methods. He’s also the creator of the cronut – a croissant-doughnut hybrid. His latest creation is just another example of how creative thinking can help you come up with something unique and unexpected that customers will love.

That type of thinking crucial for a business like Ansel’s. There are ice cream and pastry shops on nearly every corner. So in order to make one stand out from the rest, you have to have something that no one else is offering – or at least a better version of what others are offering.

Adding kale to sorbet might not make it actually better tasting than other frozen treats. But there are plenty of health-conscious people out there who would be willing to pay for a healthier version of their favorite dessert. And even if your business isn’t one that specializes in sugary snacks, this type of differentiation can still be a huge benefit.

So the next time you come across an unorthodox ingredient, product idea or other business methodology, think twice before just dismissing it. You could be passing up a huge opportunity for innovation.