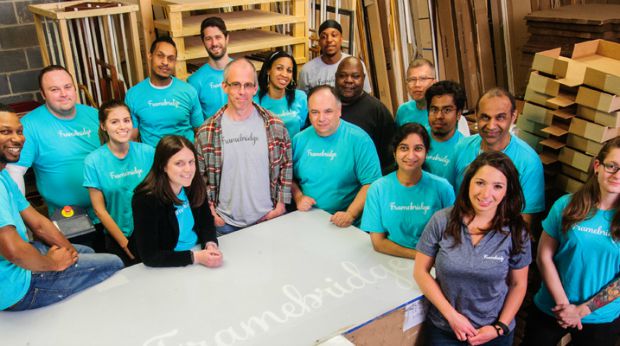 Custom framing is far from a new industry. Home and craft stores have been charging big bucks to preserve customer photos and other memories for years.

But Susan Tynan thinks she’s found a better way to do it.

The founder of Framebridge, the Washington, D.C.-based custom framing startup, has even secured about $12 million in funding for her venture over the past year. So what is it that makes her idea different enough that it could attract not only customers but also investors?

First of all, Framebridge doesn’t operate as a brick-and-mortar store. Instead, the company’s customers can send either digital or hard copies of their art or photos to the company to have them framed.

Framebridge has a pre-set selection of frames and designs that customers can choose from. And they then send out the framed art for a small fraction of what customers would pay at retail stores.

Tynan recently spoke with Inc. about her business model and how she was able to attract investors even in an industry like framing. Inc’s Graham Winfrey wrote:

“Tynan’s pitch to investors centered on the the advantage her operation would have over most frame stores, which purchase their materials only after customers place an order and rely on distributors to cut materials into pieces. The inefficiency of this model, which also requires paying retail staff even during downtime, makes custom framing a costly process, she says.”

Framebridge is already on track to earn about $3 million in revenue this year. And many of the company’s customers have said that Framebridge was actually their first custom framing experience, since high prices deterred them from the industry before.

The company’s success demonstrates how even the oldest industries can be improved. Tynan’s idea didn’t completely revolutionize custom framing. She simply found a way to keep costs down enough to attract some new customers.

Improvements like this one seem small to outsiders. But offering lower prices, easier experiences or other small benefits can be a big deal to customers.