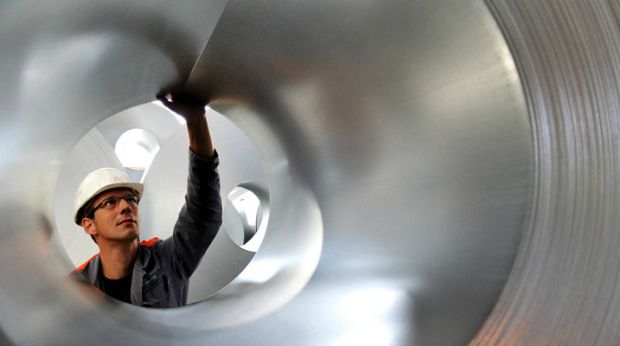 Traditionally, metals need to be extracted through mining and then shaped into usable materials using large amounts of heat. But now, a Seattle-based startup thinks it has found a better, more energy-efficient method for creating metal.

Modumetal has developed a way to “grow” metal using electricity and nanotechnology. This method allows the company to control basically all of the charicteristics of the metals.

Christina Lomasney, CEO and co-founder of Modumetal, is a physicist who has spent years working with this type of electrochemistry and materials. She told Fortune that the company’s process is “the ideal way of making materials.”

She said the method to grow metal, which involves manipulating the matter on a molecular level, is similar to how trees grow.

With trees, the sunlight, water and other environmental factors control their growth. So, Modumetal simply controls some outside factors that impact the material’s characteristics so they can control just about every aspect of the metal.

Oil rigs off the coasts of Australia, Africa, and the U.S. are already using some of the company’s metals. Aside from the manufacturing process, the other benefit to Modumetal’s products is that they can withstand the ocean’s corrosion for up to eight times longer than traditional metals, according to the company.

Since they can both last longer and cost less to produce than other metals, Modumetal could be onto a huge innovation that could potentially impact a lot of industries.

Metal is such a useful and popular material that has so many practical applications. If this method to grow metal takes off, it can save quite a bit of energy and money for the companies that use it.

Modumetal just secured a $33.5 million round of funding led by the Founders Fund so it can continue to develop and grow its technology. But that doesn’t mean the company won’t have some big hurdles to get past.

Gaining business from large companies that use a lot of metal, like auto manufacturers, can be difficult for new companies since they often represent a significant risk. In addition, larger materials and metals companies with more resources could try and emulate what Modumetal is doing. And more established names could have an easier time gaining the trust of those businesses that Modumetal is after.

But if the company can really protect its patents and gain the confidence of some more big names, they could certainly disrupt the metal industry. And by extension, they could impact all of the other industries that use a significant amount of metal, which is no small accomplishment.