Livestreaming communities put businesses on a fast track for discovering and engaging Millennials. By 2018, half of America’s workforce will identify as Millennials. They cringe at the thought of being “targeted” by traditional marketing tactics.

Instead, they’d rather be seen as future leaders, collaborators and idea-tors. eMarketer says 25 to 34-year olds will make up the largest segment of digital video viewers of any age group by the end of 2015, accounting for more than 18 percent of 204.2 million digital video viewers in the U.S.

Those among the 18 to 34-year-olds, along with 12 to 17-year olds have the highest levels of digital video viewer penetration among all age groups, reaching levels of more than 90 percent.

Josh Greenbaum is a content creator, YouTuber, and aspiring fashion designer who grew up with a love of video, music, photography and fashion. He joined Periscope on its launch day in March 2015 and nearly 46,000 follow him on the platform today. He will be speaking at the first Periscope Summit in New York City later this month.

Jeongwoon Eun is a creative interviewer and vlogger with a passion for increasing exposure for small and medium-sized businesses. She was the producer and director for the documentary “Still Standing” based on Hurricane Katrina survivors. In 2007, she won the Jury Award at the Media That Matters Film Festival.

At a recent meet-up in New York City, Small Business Trends caught up with these two forward-thinking minds. 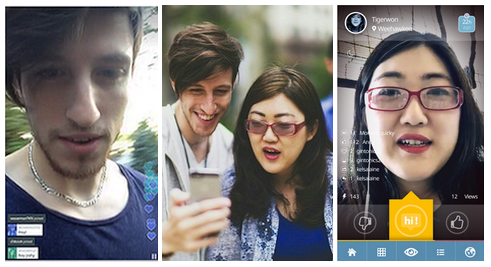 Small Business Trends: Can a small business who wants to engage and target Millennials do so through livestreaming?

Josh Greenbaum: Livestreaming has opened the door for different age groups to collaborate. I’ve been working with one of the founders of the Periscope Summit, Ryan Bell. We have differences in age, location and lifestyle, but we’re learning together through community.

As this technology develops, I predict more inter-generational collaborations. Tarikh Korula, CEO of Katch.me is another great example of that. I met Tarikh at a Meerkat meet-up and he introduced me to Blab a few days later. Users of every age are learning from one another on livestreaming platforms.

Jeongwoon Eun: Millennials are embracing the livestreaming movement, and not just Periscope. I helped an entrepreneurial single mom in the beauty space improve her livestream strategy. A few months ago, I was Periscoping and she typed a few questions. After looking at her Periscope content, I gave her my feedback on what I thought her audience would like to see in future live streams.

She took my advice and said it not only improved her livestreams, but she now has 1,473 followers, up from 400. She also has better audience retention now because viewers are coming back to hear her tips. 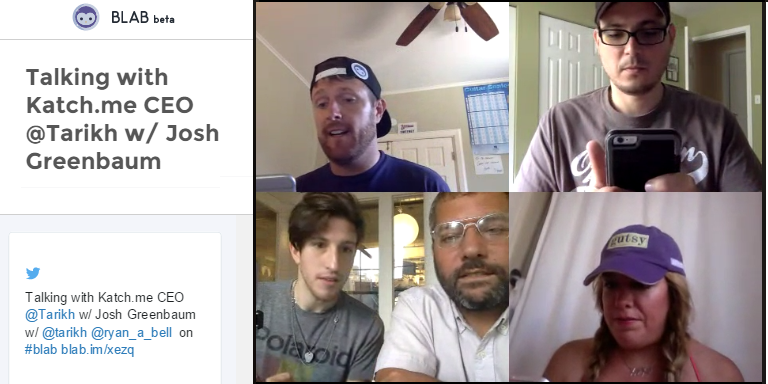 A screenshot from the Blab.im platform, a technology with similarities to Google’s “Hangouts On Air”

Small Business Trends: Can you tell us about what you do and what Periscope specifically helps with?

Josh Greenbaum: My goal is to create and develop a clothing line for men and women. While that’s still in the works, Periscope allows me to reach a large audience who inspires me.

I’m hopeful that through the contacts I’ve made within the Periscope community, I will reach that goal. My daily personal goal has always been to make people smile and feel good about themselves, whether it be through my YouTube videos, or Periscope, or through my clothing line. I’m excited I was chosen to be a speaker at the Periscope Summit later this month!

Jeongwoon Eun: Tigerwon Inc. provides promotion and marketing services with related consulting for brands, both new and older. We’re based in New York City. Our company also has a multimedia website which can feature photographic, audio, and video content to promote projects about fashion, food, startups, travel and technology.

Periscope lets us see how we can enhance small businesses and enterprises, including organizations in the arts and non-profits.

Josh Greenbaum: On Periscope, businesses of all sizes benefit, whether through native marketing or companies broadcasting themselves. It has a large user base and a lot of sectors to cover. Small, local businesses can use Periscope as way to launch selling of goods and services nationwide or internationally. Large corporations can keep their products in the forefront of viewers’ minds.

Small Business Trends: Who do you like watching on Periscope?

They all bring something different to the table and define what the purpose of Periscope is with their various backgrounds and strengths. I encourage everyone to watch them as well other Periscopers found on the Most Loved list or when searching through the Global Page. You never know who you might find, or who that broadcast may lead you to.

They’re all using Twitter and are also on Periscope or MyEye.