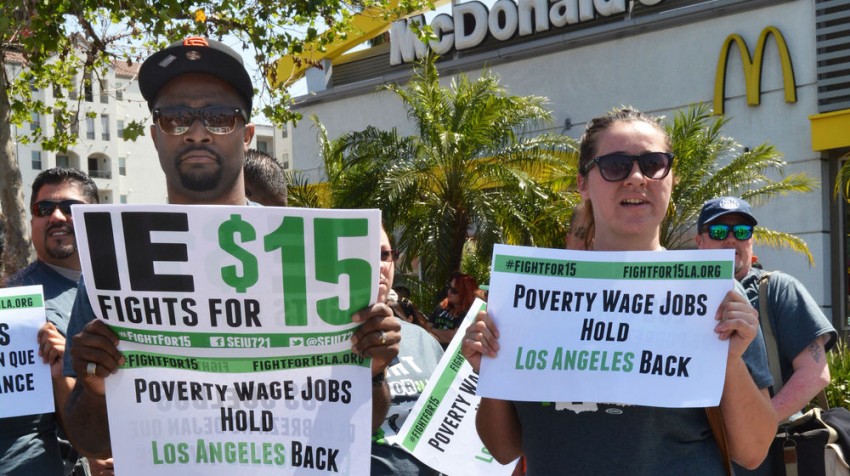 A recent ruling by the National Labor Relations Board has made it easier for unions to negotiate on behalf of employees at fast food franchises and other companies that use contractors.

The board voted 3-2 along party lines to expand the definition of what it means to be a “joint employer,” thus making it harder for companies to outsource.

“In doing so, the panel sided with labor advocates and academics who have described an increasingly ‘fissured’ economy, in which whole industries have been built on business models that offer workers few of the protections of a traditional employer relationship.”

The newspaper predicted the decision will “redefine the employee-employer relationship granting new bargaining powers to workers caught up in an economy increasingly reliant on subcontractors, franchisees and temporary staffing agencies.”

Writing on The Daily Signal, the Heritage Foundation’s James Sherk says the ruling will force franchisees to give up control of everyday business decisions:

“Until now, the NLRB has always defined an employer as the firm that hires, fires, pays wages, disciplines, promotes, and makes work assignments. That’s just common sense and comports with most Americans’ understanding of whom they work for. The NRLB is now saying that companies that contract with other firms for services or set quality standards in exchange for brand licensing implicitly influence the other firms’ employees and should be required to bargain collectively with them. If allowed to stand, this new interpretation will effectively destroy the franchise model of business.”

McDonald’s workers mounted a nationwide campaign to improve their working conditions in 2012. According to the NLRB, workers filed 310 unfair labor practice complaints against McDonald’s. Of those, 107 were found to have merit, but only one-tenth of that number involved a McDonald’s that was solely corporate-owned.

The NLRB said the complaints involved “discriminatory discipline, reductions in hours, discharges, and other coercive conduct directed at employees in response to union and protected concerted activities, including threats, surveillance, interrogations, promises of benefit, and overbroad restrictions on communicating with union representatives or with other employees about unions and the employees’ terms and conditions of employment.”

The NLRB says an investigation found McDonald’s “engages in sufficient control over its franchisees’ operations, beyond protection of the brand, to make it a putative joint employer with its franchisees, sharing liability for violations of our Act. This finding is further supported by McDonald’s, USA, LLC’s nationwide response to franchise employee activities while participating in fast food worker protests to improve their wages and working conditions.”

Still, the ruling may not be permanent.

According to a New York Times report, Republican lawmakers are expected to challenge the decision, as are companies like McDonald’s and Yum Brands, which owns chains such as KFC and Pizza Hut.

For more on this topic, see:  Business Owners, Legislators Fight Back Against Joint Employer Labor Ruling