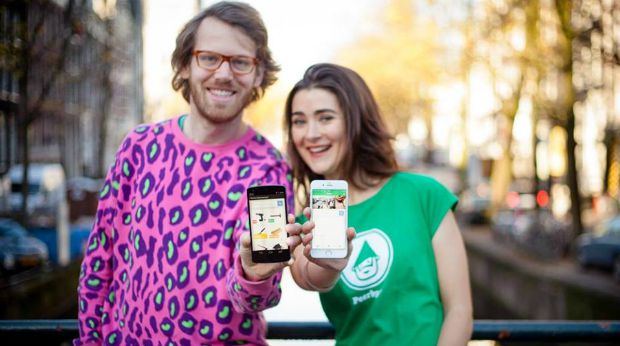 As kids, we’re taught that it’s best to share with one another.

Now, a whole host of new businesses are transforming industries based on that concept. If you have an extra room, you can rent it out using Airbnb. If you have a car and some free time, you can offer rides with Uber or Lyft. And now, if you need to borrow basically anything, from a lawnmower to a disco ball, there’s Peerby.

Peerby is an online service that helps to connect people in particular cities who want to lend or borrow various household items. Launched out of Amsterdam in 2012, the service is now available in 20 cities throughout Europe, and has 10 pilot projects in the works in the U.S.

Daan Weddepohl is the founder of Peerby. The idea for the company came to him after a fire destroyed nearly all of his belongings. When he experienced the kindness of friends and neighbors lending and giving him things to help him rebuild, he wanted to build something that would allow others that same opportunity. He told the New York Times:

“I discovered that the people around me were so much more important than the stuff. People love to help other people out — we’re wired to help others.”

Those who want to borrow an item need to sign up for an account either on the Peerby website or one of its mobile apps. Then they can browse nearby items in categories like home improvement, moving or holidays – all include items that people are likely to have on hand but only use on occasion.

They can also request specific items and Peerby will send out push notifications to potential nearby lenders. According to the company, most lenders are connected with potential suppliers within 30 minutes or less.

In addition, the company just rolled out a new “Peerby Go” model which offers insurance and delivery options and takes a part of each commission. That’s part of the company’s plan to make itself profitable. At the moment, it’s surviving because of investors.

Time will tell if a business that’s based on lending and borrowing can become truly profitable. But this type of business is definitely gaining popularity, especially with young people.

There are trust issues involved, as with any business in the “sharing economy.” But there’s also a bit less risk invoved in renting out some gardening equipment than there would be with letting a stranger spend the night in your spare room. And that’s a concept that’s growing by the day.