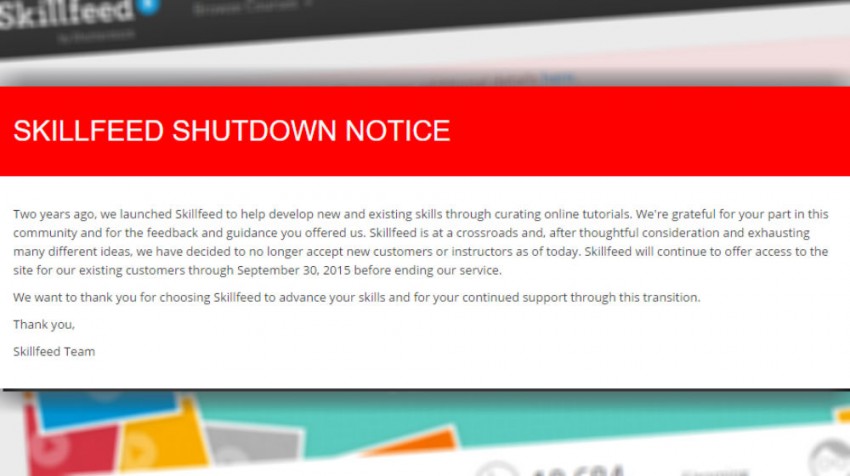 Skillfeed.com, an online video tutorial and learning marketplace run by Shutterstock, is shutting down effective September 30, 2015.

An announcement posted by the Skillfeed team explains:

“Skillfeed is at a crossroads and, after thoughtful consideration and exhausting many different ideas, we have decided to no longer accept new customers or instructors as of today. Skillfeed will continue to offer access to the site for our existing customers through September 30, 2015 before ending our service.”

Skillfeed opened in the summer of 2013. It was a platform where freelancers and others could load video courses and earn money from them.

Other professionals desiring to learn would get a subscription entitling them to take the video courses.

Courses covered technology, marketing, and business topics. Courses were as comprehensive as how to learn search engine optimization, at over 3 hours long. Other courses were very short and specific, such as the 9-minute course “How to Remove Acne with Photoshop.”

The site says it had nearly 95,000 video tutorials from 1,291 instructors. It posted FAQs about the shutdown, which read in part:

No the content is only accessible on the Skillfeed site unless the contributor has posted their material on other tutorial websites. All content will be completely removed after September 30.”

Back when Skillfeed was launched, the idea was to extend the hugely successful Shutterstock model of a stock image marketplace, to training. Shutterstock Founder and CEO Jon Oringer said at the time, “The idea evolved from our existing customer and contributor communities and quickly expanded to include all digital professionals. Creatives and technology professionals are always looking to improve their skills, and Skillfeed offers high-quality training alongside an all-access membership model.”

Shutterstock has very successfully extended the stock image model to video clips and even music clips.

However, Skillfeed seems not to have caught on with the same overwhelming success. In part, that may be due to the competition of other online training platforms such as Lynda.com (acquired by LindkedIn) and Udemy.com.  Also, the demand for training may simply not have been as robust as the demand for stock images and footage.

Shutterstock (NYSE: SSTK) is a giant in the area of providing stock photographs, vectors, illustrations, music and videos to businesses. Headquartered in New York City with a market cap of more than $1 billion, Shutterstock has over 80,000 contributors and a library of over 60 million images and 3 million video clips.